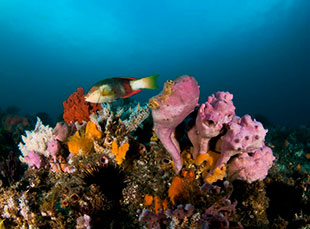 Sandy beaches support a diverse range of invertebrates, including crustaceans, beach worms and molluscs. Sandy beach shallows and surf areas of exposed sandy beaches are important nurseries for a variety of fish species.

Sandy beaches are a key feeding and roosting site for shorebirds, seabirds and migratory wading birds, including threatened species such as the little tern and pied oystercatcher.

The park includes the state's largest:

Grey mangrove and river mangrove species are found within the park.

Saltmarsh areas are also abundant within Port Stephens, and can be found at the same locations as the mangrove forests.

The saltmarsh areas are important for flood and erosion control, pollution control, and provide food for the estuarine food chain.

Seagrass beds are widely distributed within the Port Stephens estuary and occur adjacent to most shorelines up to Karuah.

Common seagrass species found within Port Stephens estuary include: eelgrasses, paddleweed and strapweed. The seagrass beds are an important habitat for juvenile stages of commercial and recreational species such as snapper, yellow-fin bream, tarwhine and luderick.

Rocky shore habitat support a wide range of species, including barnacles, gastropods (such as whelks and limpets), chitons, worms and algae.

They also provide roosting and feeding habitat for some seabirds.