The primary precursor to disease in wild populations is usually stress from physical or chemical factors such as lowered water temperature, rapid changes in salinity, chronic pollution or crowded conditions. In many cases the disease-causing parasites, viruses, microbes or fungi are present in low levels even in healthy populations, with environmental conditions or other stressors reducing the resistance to disease and making the fish susceptible to infection.

Australia is relatively free of many of the major fish diseases present overseas. Introduction of new diseases, for example via imported products, can lead to increased deaths in native species which have no exposure and hence little resistance to the new disease. For example, the much publicised death of millions of pilchards in coastal waters of southern Australia in May 1995 is thought to have been due to a newly introduced viral disease (see Whittington 1996 (www.int-res.com)). 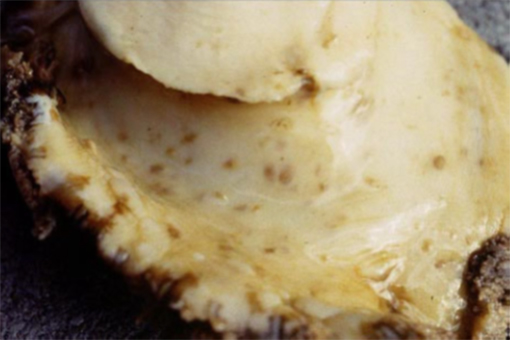 From the early 1990s through to the early 2000s the protozoal parasite Perkinsus olseni had a devastating effect on abalone stocks around Port Stephens, Central Coast, Sydney and Kiama. In some areas, it caused abalone numbers to drop to just 5% of their former populations. The major risk to abalone occurs when the infected animals are stressed or if the parasite is introduced into a new population. The Perkinsus parasite is not harmful to people. Efforts to reduce the impacts of Perkinsosis on wild abalone stocks and allow for stock recovery have included commercial and recreational fishing closures (from Tweed Heads to Jervis Bay), stock assessments and reductions in the number of abalone that may be lawfully taken by or be in possession of recreational fishers (from 10 abalone to 2 abalone) and commercial fishers (managed through a kilogram amount of abalone per share). Since the mid 2000s there have been no reports of mortalities from Perkinsus and there have been some signs of recovery of abalone stocks especially in the southern part of the affected area. In response the commercial and recreational fishing closures were amended in 2010 and 2012 to allow fishing under specific conditions, and in 2017 those fishing closures were revoked.

Abalone viral ganglioneuritis (AVG) causes ganglioneuritis (inflammation of the nervous tissue, resulting in curling and paralysis of the foot and swelling of the mouth). AVG has caused devastating losses to the Victorian abalone industry and has also been detected in seafood processing facilities in Tasmania, most recently in November 2011. It has not been detected from any other State, though there is potential for it to spread.