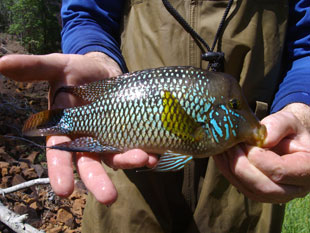 The pearl cichlid (also known as the pearl eartheater, Geophagus braziliensis) is an aggressive freshwater fish native to South America. They are a popular aquarium species, having an attractive pattern of pearly spots over a grey-green body with red fins. However when released in the wild they can potentially become a significant pest, based on their size, hardiness and aggressive behaviour.

Pearl cichlids are a hardy member of the Cichlidae family, and are native to coastal drainages of eastern and southern Brazil and Uruguay. In Australia, they are a popular aquarium fish typically sold for tropical freshwater tanks. They can live up to 15 years and reach 30cm in length. Optimal water temperature is between 21oC and 25oC; however they can survive in temperatures down to 10oC. Despite being a freshwater species, they are able to survive in full strength seawater.

In the wild they feed on a variety of foods including insects and algae, and a large part of their diet is made up of organisms found by sifting through the substrate, hence the name pearl eartheater. They can be quite territorial by nature. Females can lay up to 800 eggs at one time. When breeding, a pair cleans a nesting site and guards the eggs, and may be very aggressive to other fish which enter their territory.

The pearl cichlid was first reported in the areas around Murwillumbah and Uki in 2008. However, more recent sightings have occurred near Dum Dum on the Tweed River and at Doon Doon Creek, below Clarie Hall Dam, on a tributary of the Tweed River. These new reports, together with regular flooding in the area, have raised fears the cichlid may have become more widespread.

There is little doubt that the wild populations of this species that have been detected in NSW have originated from discarded aquarium fish. Numbers reported to date have been low, although due to the hardiness and adaptability of this species there is potential for it to become more widespread and common in coastal river systems.

It is illegal to release fish into the wild without a stocking permit and heavy penalties apply. The release of small aquarium fish can cause significant damage to our native fish and other wildlife. I&I NSW recommend unwanted fish are given to a friend or pet shop. If an appropriate home cannot be found see the recommended guidelines for humane destruction of fish.

What is I&I NSW doing?

Unfortunately there is little I&I NSW can do to eliminate this pest from the Tweed River systems, because the pearl cichlid is known to have several populations over a large area, they are difficult to find and even harder to catch. I&I NSW will continue its ongoing monitoring of coastal and inland rivers.

If any new populations of pearl cichlid are discovered they will continue to be monitored, and where possible, action will be taken to control or remove them. The best control measure is to remove them opportunistically and obviously the more people who help, the more chance there is of containing their numbers. For this reason I&I NSW is appealing to anglers to keep a look out for the cichlid, and not return any they catch to the water.

Cichlids are a popular aquarium species because they are easy to keep, hardy, adaptable and breed prolifically. Unfortunately, such features also make them likely to survive, establish and become pests if released into the wild.

There is often little information available on how these species impact native fish and habitats, although many are capable of dominating native fish populations through their aggressive behaviour and competition for food and space.

The particularly aggressive temperament of the pearl cichlid raises further concerns about the threat this fish would pose to native fauna if it were to establish in other NSW waterways.