Q. What are the new changes to recreational fishing rules for Dusky Flathead? A.  The new changes from 1 August are:

Previous rules were a minimum legal length of 36 cm and a daily bag limit of 10 fish with only one fish over 70 cm.

Q. What is the difference between a daily bag limit and a possession limit?

The daily bag limit for Dusky Flathead will be decreased from 10 to 5 per person, per day, however, the possession limit will remain unchanged at 10 per person to enable travelling fishers to store and freeze up to 10 fish for future consumption (over multiple days fishing).

For more info on the limits, head to the DPI website.

Q. Why were these changes implemented?

The community support for the rule changes received during the consultation process is consistent with community sentiment over the past decade for proactive, more conservative fishing rules, including a slot limit to provide for more protection of the spawning biomass in the stock.

Releasing large sized Dusky Flathead has become socially important in recreational fisheries in NSW and elsewhere in Australia. This has certainly led to enhanced fishing opportunities with released fish being recaptured by fishers over time.

These changes will help boost the stock of bigger fish and ultimately provide better fishing opportunities for recreational fishers for this highly popular species in the future.

Q. Do these changes impact other species of flathead in NSW?

A. No, these changes are for Dusky Flathead only.

Q. What impact will these changes have on the Dusky Flathead stock in NSW?

A. While the Dusky Flathead stock is classified as sustainable in NSW, introducing an upper legal limit of 70 cm will provide for greater protection of large reproductively important female fish. This will in turn result in an increase of the spawning biomass in the stock and subsequent increase in egg production. A slot limit and bag limit reduction would also promote a more natural age structure (comprising more ‘older’ fish) which may have important implications for stock resilience. It is expected that these rule changes will enhance Dusky Flathead fishing opportunities in NSW’s network of Recreational Fishing Havens. Key RFHs including St Georges Basin, Tuross and Lake Macquarie, are recognised as “trophy” Flathead fisheries with excellent populations of large Flathead.

Q. Do large flathead have good chance of survival after release?

A. Several scientific studies have considered post-release survival of recreationally caught Dusky Flathead and have shown the species to have high (~90%) survival following capture, handling and release.  This suggests that survival of additional fish caught and released as a result of the proposed changes will not result in significant additional mortality.

This is further been demonstrated through the significant community interest in DPI’s Trophy Flathead program in Lake Macquarie, St Georges Basin and Tuross Lake, which encourages recreational fishers to voluntarily release all Dusky Flathead over 70 cm, combined with a targeted tagging program.

Between November 2016 and July 2021, a total of 838 Dusky Flathead over 70 cm have been tagged and released in these three recreational fishing havens. A total of 119 recaptures have to date been reported to DPI since the tagging program commenced. The high recapture rate (14.2 %) demonstrates not only the popularity of the species, but also the resilience of this species to catch and release using hook and line recreational fishing methods.

A. Similar to recreational fishing, the current minimum legal length of 36 cm already applies to commercial fishers. Scientific monitoring has shown that Dusky Flathead greater than 70cm comprise typically fewer than 1% of commercial catches in any given year. It is not proposed for the new upper legal limit of 70 cm to apply to commercial fishing activity to avoid any wasteful discard of large Flathead.

Q. What changes to recreational fishing rules for Lobsters have been implemented? 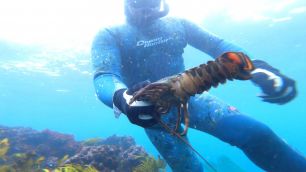 A. The daily bag limit has been increased to 3 lobsters comprised wholly of any single species or a combination of species of Eastern Rock Lobsters (Sagmariasus verreauxi) or Southern Rock Lobster (Jasus edwardsii) (previously the combined bag limit was 2 per person).

Q. Why were these changes implemented?

A. As a result of effective management controls since the 1990s, the population of Eastern Rock Lobster has recovered to a healthy stock biomass, resulting in the Total Allowable Commercial Catch (TACC) being progressively increased over time to the current level of 180 t in 2021/22. This has provided the basis for a bag limit increase for the recreational fishers.

Following community support from a comprehensive consultation process and finalisation of the Lobster Harvest Strategy, the NSW Government has increased the Lobster bag and possession limit for recreational fishers. This rule change is also supported by the Recreational Fishing NSW Advisory Council.

Q. What is the current stock status of Eastern Rock Lobster?

A. Eastern Rock Lobster is currently classified as sustainable in NSW. The latest Status of Australian Fish Stocks Reports can be viewed at www.fish.gov.au.

Ongoing stock assessment modelling by DPI scientists have shown an approximate threefold increase in biomass of Rock Lobster within the legal size range (104 mm -180 mm) since the mid-1990s when the stock was in a depleted state. As a result of effective management controls and the implementation of ongoing monitoring programs, the population of Eastern Rock Lobster has recovered to a healthy stock biomass.