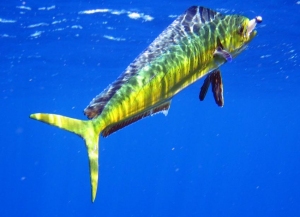 Mahi-mahi are a migratory pelagic species with a worldwide distribution that are most common in tropical-temperate waters over 20°C. It is this wide coverage of the species that has led to it being known by a number of names including mahi-mahi (Hawaiian for "strong-strong") or dorado (Spanish for "gold"). The mahi-mahi is one of the most commonly encountered sport fish around the FADs and present excellent eating qualities if handled properly after capture

Mahi-mahi are the perfect sport fish having a remarkable growth rate, known to grow as fast as 7 centimetres in a week. In the wild juvenile mahi-mahi can reach 1kg in six months and 10kg in one year and attain a maximum length close to 200cm (weighing up to 40kgs). Mahi-mahi can be sexually mature as early as 6 months of age, are highly fecund and serially spawn (females appear to be in a constant state of egg production). They are relatively short-lived. Wild fish rarely live past two years of age; total annual mortality for the species (natural death plus human harvest) has been calculated around 98.0% to 99.7%.

In tropical waters, mahi-mahi generally occur year-round. In sub-tropical and warm-temperate waters such as NSW, seasonal abundances are associated with the appearance of warm water in summer and autumn. Off the east coast of Australia, mahi-mahi move south in summer and autumn, then north in late autumn and early winter.