About catch and release

Catch and release fishing is an increasingly popular practice among many anglers. It is quite common for fishers with a strong conservation commitment to release fish that they could legally keep.

Compliance with bag and size limits and various fishing closures also means many anglers, by law, return fish they have caught to the water.

Recent research has shown that most fish survive using current catch and release techniques with the main factors found to reduce survival being deep hooking and poor handling.

To maximise a fish's survival when practising catch and release, it is important to follow a few simple rules: 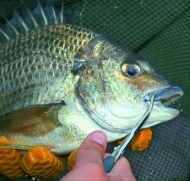 Other practices to help increase survival

Other practices to help increase survival include:

When many fish species are caught from water deeper than 10 metres, they can display a range of injuries due to the changes in pressure, known as barotrauma. 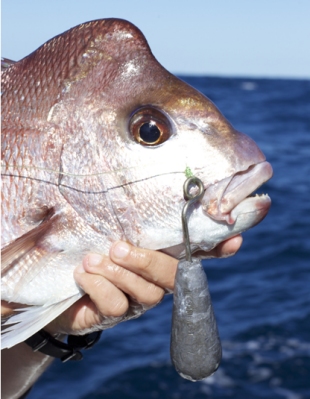 Barotrauma results from the expansion of gases in the swim bladder and other organs when fish do not have time to adjust to the rapid changes in water pressure as they are pulled towards the surface. The affects and severity increase with depth of capture and susceptibility varies between species. Physical effects include inflated abdomen, bulging eyes, stomach pushed outside the mouth and distended intestines.

DPI research to date has shown that that resilience to barotrauma effects varies from species to species. For example, snapper have been shown to be very resilient whereas species such as mulloway are much less resilient, particularly when fishing in water over 30 m deep.

There are three options that are used to treat fish experiencing barotrauma:

It is recommended that fish displaying mild barotrauma should be released as quickly as possible following capture with no treatment. Most of these fish should be able to swim down to depth by themselves.

Research has shown that keeping fish in live wells after they have been caught from deep water can increase the effects of barotrauma. For this reason, to minimise barotrauma symptoms, fish should be released as quickly as possible after being caught from water over 10m deep.

If the fish is displaying significant barotrauma symptoms or is found to be excessively buoyant and unable to submerge by itself, a release weight should be used to re-pressurise the fish back to depth. Due to the inherent risk of further (stabbing) injury caused by a venting tool, venting is not recommended as a normal response to barotrauma symptoms in fish.

How to use a release weight

Release weights are generally used with a hand spool although they may be used with a spare rod. Usually 30 metres of line is sufficient to re-pressurise the fish enough to swim off the line. It is important to get the fish as deep as possible before it is released from the weight. Try not to cause any sudden jerking whilst fish is descending as this may dislodge the weight from the fish before it safely reaches the bottom. The fish will often swim free of the weight as it re-compresses, otherwise a sharp lift should dislodge the barbless hook so that the release weight can be retrieved.

Release weights may be purchased from good tackle shops or you may make your own using a large snapper sinker and a barbless hook. Attach heavy mono (~ 80-100lb), Venetian cord or similar to the bend of the hook. Approximately 25-30 metres of line should suffice. A hand spool will help keep the line tidy and tangle free.

Studies carried out on recreationally caught-and-released mud crabs and eastern rock lobster have demonstrated that these species are particularly hardy. Most impact caused by catching these crustaceans is limited to physical damage; most of which occurs during handling. While such damage did not cause any mortality in the research, it is important to acknowledge that wild crustaceans that lose appendages (especially claws/swimmers for mud crabs and antennae for lobsters) may be negatively impacted in terms of feeding, predator defence and reproduction.

To minimise any of these impacts, the following fishing and handling guidelines are suggested:

A catch and release measuring mat has been designed to help anglers accurately record their catch. 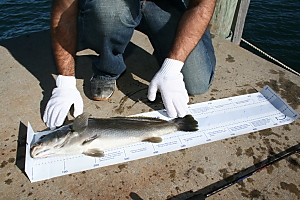 The mats include full colour illustrations of the most popular saltwater & freshwater species of fish and conversion tables so the approximate weight of a fish can be estimated from its length measurement.

They also include tips on the best methods to use to ensure the fish is given a maximum chance of survival after release. Large graduations on the ruler can help in the many 'Catch, Photograph and Release' fishing competitions that have emerged in recent years. The mats are manufactured from a UV stable material.

How to purchase a mat

Catch and release mats can be purchased online by following your preferred link below: