Turtles can drown in crab traps after forcing their way into the  trap or by becoming entangled in the mesh and being unable to return to the  surface to breathe.

NSW DPI NSW recommends that fishers utilise the following measures  to reduce the risk of turtle drowning in crab traps:

Use  crab traps that have small entrances or funnels

Currently several types of crab trap are available  on the market. Traps that have funnels represent a reduced risk to turtles due  to the entrance to the trap often being too small for a turtle to enter. The large, rectangular, open-ended collapsible  mesh type crab traps have large entrances at either end of the trap allowing  turtles to swim inside and become trapped. It is recommended that the entrance size of the  trap is reduced as detailed below.

Reduce  the entrance size of the trap

It is considered that a maximum entrance size of  30cm is appropriate to prevent turtle entry.

The entrance of an open-ended crab trap may be reduced  by simply using either twine or an electrical cable tie to close the entrance  in one or two places. 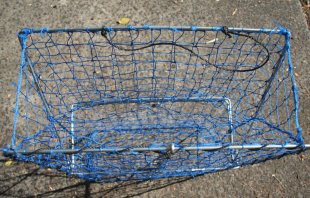 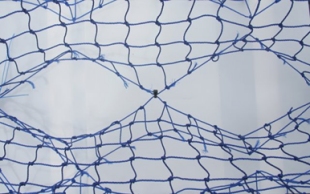 On traps with large funnel style entrances, the  funnel can be reduced in size. This may be done using a piece of piping (or  similar) across the external mouth of the funnel entrance.

These measures will help prevent turtles from  entering the trap and becoming trapped.

To reduce the probability of entangling non-target animals; witches hats can easily be converted to a lift net by removing the float from above the mesh and re-attaching the float line with several lengths of lines directly to the ring. 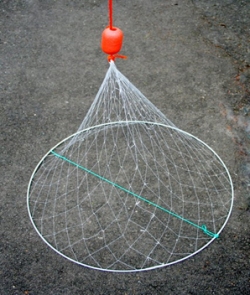 A “witches hat” - the float keeps the netting material off the bottom and the inverted mesh operates as an entanglement net. 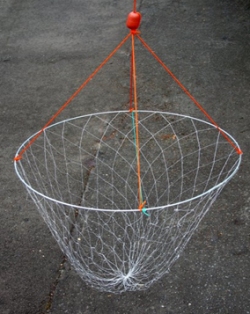 An example of a hoop or lift net - the ring and net lay on the bottom when set and crabs feeding on the bait are caught when the net is lifted.

Reduce  the soak time of the trap

Fishers should check their traps as regularly as  possible, rather than leaving them unattended for extended periods of time.  Reducing the soak time will reduce the probability of air breathing animals  (such as turtles) drowning.

Note: All marine turtle species in NSW are listed as either  endangered or threatened under the NSW Threatened Species Conservation Act  1995.