The drought recovery period can be extremely challenging for producers. Rain variability is the source of high uncertainty and means that no two drought recoveries are the same. Drought recovery is largely driven by rainfall and the effectiveness of the rainfall in improving the water and agronomic status of the farm. There is also the risk of a “false recovery” if improvements cannot be maintained due a lack of follow up rainfall. The NSW Combined Drought Indicator (CDI) can be used to track the drought recovery transition period.

Enough rain at the right time causes an initial improvement in paddock conditions (e.g. pasture growth or sowing opportunities). Soil moisture levels have improved but are not adequate to sustain production. The nature of recovery remains uncertain and farm performance is highly dependent on follow-up rain. Drought response is still needed, and decisions remain difficult. A “watch and monitor” approach that provides flexible options to reduce risk during a ‘false recovery’ is recommended (e.g. modest re-stocking and dual-purpose cropping).

Follow-up rain has occurred, and further improvement in on-ground conditions has continued. Soil moisture levels guarantee a period of production, so the farm is less vulnerable to short term rainfall variability. The likelihood of full drought recovery is increased, but risk of drought re-entry remains. Decisions are focused on rebuilding, though a strategy that monitors and prepares for drought re-entry is good practice.

The farm has moved through early and late recovery and there has been a sustained period of adequate productivity. A key focus is optimising production and cash-flow in the seasons ahead, yet preparedness planning and monitoring for drought is needed to manage future risks of drought to the farm.

The blue bars in the examples show the amount and pattern of rainfall that caused the NSW Combined Drought Indicator CDI to transition from the Drought to the Non-Drought stage. The solid line shows how plant growth responded to the rainfall. 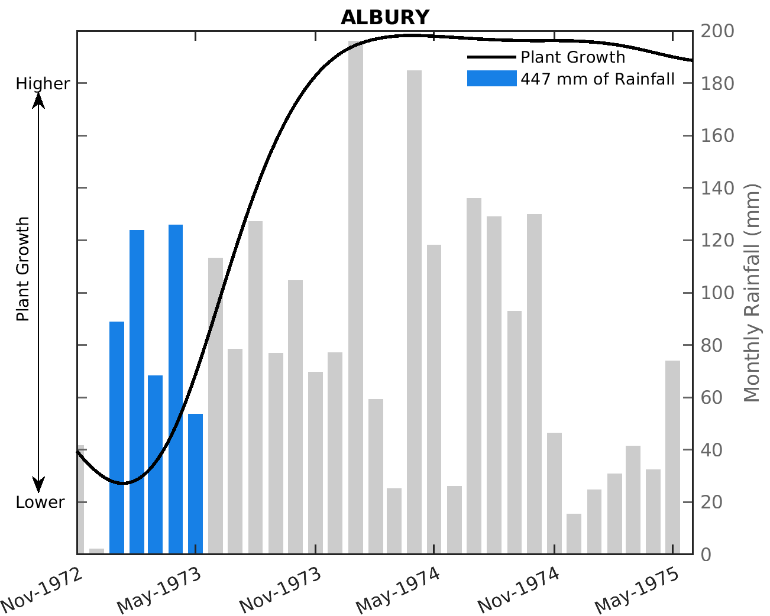 A rapid transition from drought to full recovery results from a period of effective rainfall that is well timed for pasture or crop growth. In this example at Albury, the transition to recovery took 5 months (blue bars). Early recovery commenced due to five consecutive months of effective rainfall from January to May 1973. Continued rainfall during the remainder of 1973 supported the transition from late to full recovery. The plant growth response to rain was fast during this time. (black line). In this example, favourable timing of effective follow-up rainfall totals led to a rapid recovery. 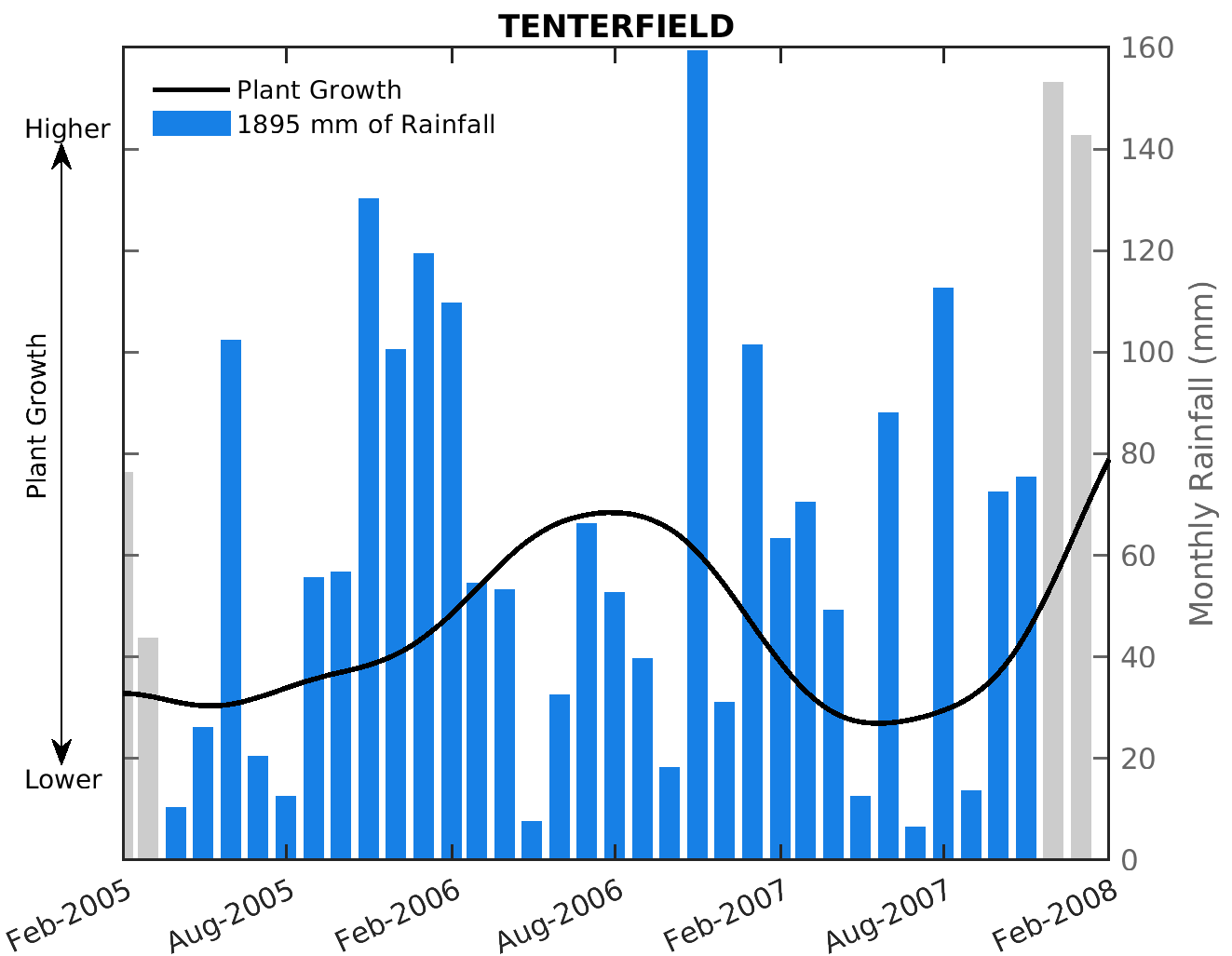 Drought recovery can take much longer when rainfall totals are low, poorly timed, or ineffective for increasing agronomic capacity. The example at Tenterfield shows a long 32-month period of variable rainfall (blue bars) that led to false gains and irregular plant growth (black line). The increased consistency and higher effectiveness of the rainfall occurring in the 2007 spring and summer finally caused a transition to later stage drought recovery. The example highlights the importance of rainfall effectiveness. It shows that the rainfall amount and the time it falls have a significant influence on field conditions. Rainfall amount is important but is not the only driver of drought recovery. 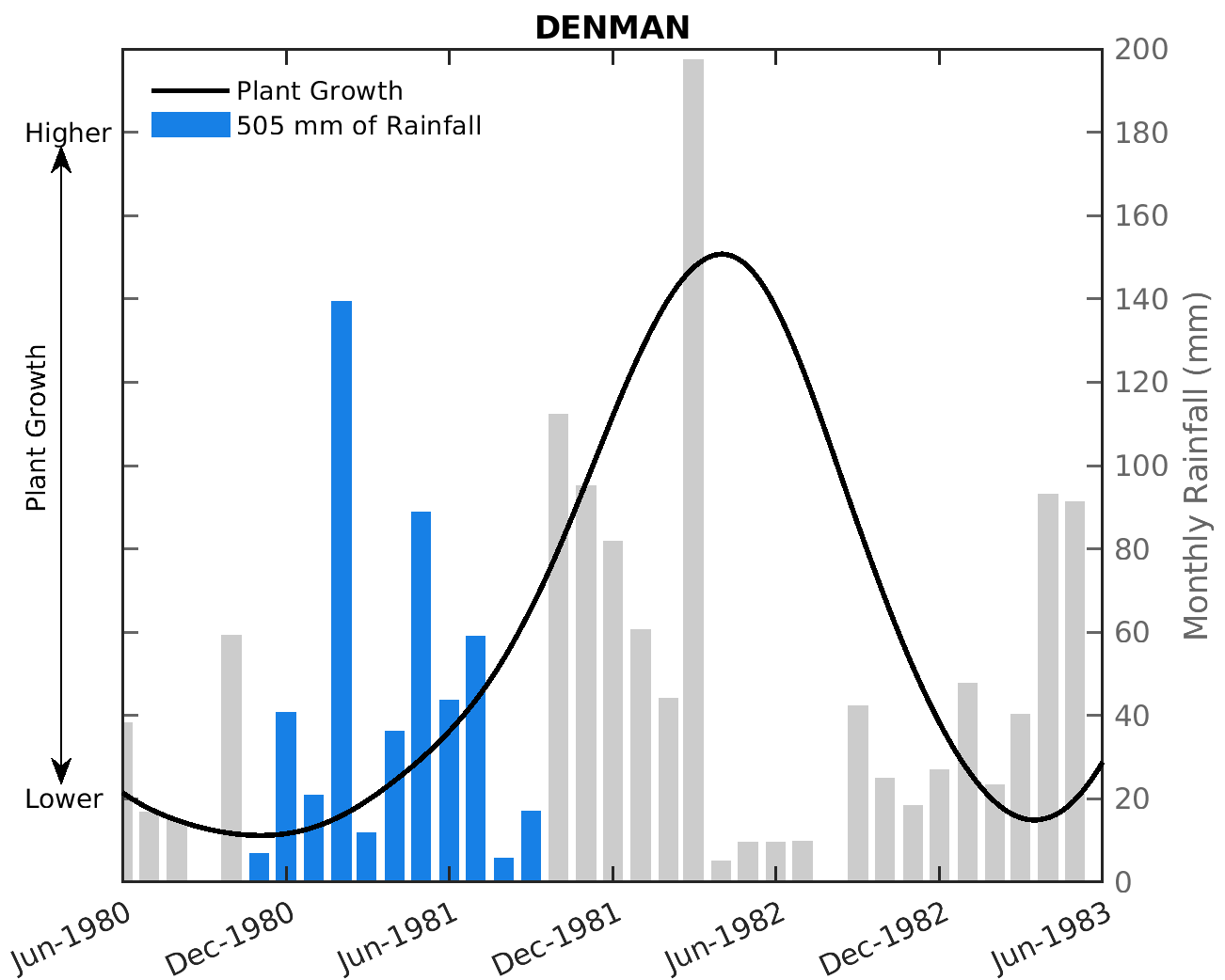 Rainfall at Denman in the 11-month period from May 2002 (blue bars) was effective enough to commence a pasture growth response and an early drought recovery by Winter in 1981 (black line). Further rain in the Spring maintained the transition to late recovery but this was not sustained. Poor rainfall effectiveness in March 1982 and dry conditions during late Autumn and Winter of 1982 caused a rapid return to drought conditions. This is a false drought recovery. The example highlights the vulnerability during drought recovery and the complex interactions that can impact the effectiveness of rainfall on field conditions. Rainfall totals are important, but don’t necessarily drive the transition from drought to full production.

Australia’s rainfall is influenced by a number of global climate drivers such as the El Niño-Southern Oscillation (ENSO) and the Indian Ocean Dipole (IOD). These drivers influence the likelihood of rainfall and should be used as a guide to assess the chance of drought recovery occurring. Generally, drought recovery is more likely if there is a strong La Niña and/or a negative IOD event, and less likely during a strong El Niño and/or positive IOD event. Other factors such as the monsoon, cyclones and intense east coast lows can also bring rainfall during recovery.

Managing the farm during drought recovery

The variable nature of rainfall effectiveness on drought recovery means that farm management response during recovery is extremely challenging. There are many practical options and decisions that need to be considered during the transition through drought recovery.