Chicory Part B - The chicory plant, cultivars, and advantages/disadvantages in pasture

Chicory (Chicorium intybus L.) is a summer-active, taprooted and highly productive perennial herb of the daisy family (Asteraceae). Naturalised chicory is commonly found on some roadsides in the higher rainfall areas of the Tablelands and Slopes of NSW, producing attractive pale blue flowers.

Chicory's origin is uncertain, but it is considered to be native to Europe, Western and Central Asia and North Africa and is now naturalised in many continents. Chicory has been cultivated for centuries and has been used in many different ways. Its most common use has been as a coffee substitute, where the long storage taproot is dried, roasted and ground. It is for this use that chicory was most probably first brought into Australia in the 19th century. Other types of chicory (sometimes called Witlof) are grown as salad and root vegetables (chicory is closely related to endive), and to produce alcohol and herbal medicines.

Chicory has been used for centuries as summer forage in Europe. It grows actively during the main frost-free period of the year, that is, in spring, summer and autumn, providing high quality feed when many grass species are haying off. In areas of low summer rainfall, the productivity of chicory will depend upon having sufficient water stored in the soil for chicory's extensive roots to exploit.

In 1985 AgResearch Grasslands, in New Zealand, released the first chicory cultivar specifically selected as a forage plant — Grasslands Puna. Chicory is very digestible, has a high mineral content (Table B1) and produces high growth rates in livestock (Table B2). In 2000, Pyne Gould Guinness released Grouse chicory as a more winter-active cultivar than Puna. Indications are that Grouse is more prone to rapid flowering and is not as persistent as Puna.

Chicory is ideal for finishing livestock, for maintaining high-value animals, for flushing ewes and cows prior to mating, and other strategic applications. Being very palatable, Puna is preferentially grazed by stock. The persistence of chicory is strongly influenced by the frequency of grazing — the longer the rest period between grazing, the longer the potential persistence. Grazing management of chicory is similar to that required for lucerne.

Table B2. Potential animal performance: chicory vs other pasture species in summer 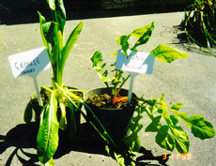 In the vegetative phase, chicory produces basal rosettes of large, soft, lush leaves with short stalks. A single plant may roduce several rosettes from its crown after grazing, giving an impression of several seedlings growing close together.

Leaf shapes of Puna (shown on the right in the photo) can vary greatly, which may cause confusion when identifying chicory plants; the leaf shape of Grouse (on the left) is more uniform.

Chicory flowers during summer after a chilling period in winter. In late spring stems emerge from the leafy crown. If left ungrazed, stems can grow to a height of 1.5 metres. As flowering proceeds, stem growth exceeds the growth of leaves. For this reason grazing management should aim to limit stem growth, by removing young green stems and encouraging leaf growth. Spring-sown chicory does not usually flower in the first year unless plants experience sufficient cold weather.

Stock may eat the crown and taproot (which resembles a turnip) if heavy grazing is allowed. Such grazing damage, particularly in winter, increases the potential for crown infection from fungal diseases.

Chicory responds favourably to the presence or addition of soil nutrients, resulting in a large volume of high-value feed. Ongoing maintenance of soil nutrients, particularly nitrogen and phosphorus, will encourage the longevity of healthy and productive chicory stands. Chicory has a high mineral content, indicating a high demand for soil nutrients (Table B1). Chicory may respond to the application of minor and trace elements in some localities. The most productive chicory stands are those with 50–60 plants per square metre. Users of agricultural (or veterinary) chemical products must always read the label and any Permit before using the product, and strictly comply with the directions on the label and the conditions of any Permit. Users are not absolved from compliance with the directions on the label or the conditions of the permit by reason of any statement made or omitted to be made in this publication.

Pasture improvement may be associated with an increase in the incidence of certain livestock health disorders. Livestock and production losses from some disorders is possible. Management may need to be modified to minimise risk. Consult your veterinarian or adviser when planning pasture improvement.

The Native Vegetation Conservation Act 1997 restricts some pasture improvement practices where existing pasture contains native species. Inquire through your office of the Department of Infrastructure, Planning and Natural Resources (DIPNR).

For further information on chicory, see the other parts of Agfact P2.5.40: