Toggenburgs were the first of the Alpine breeds to reach Britain, arriving in England in 1884. Through crossbreeding and selective breeding, the British Toggenburg emerged as a superior breed. They were first officially introduced into Australia by several private breeders, and the New South Wales State Farm at Condobolin in the mid 1940s. These came from British Toggenburg stock and more were imported in small numbers in the following few years. Grading-up, using the other Alpine breeds within Australia (particularly Saanen), is widely practised.

Toggenburgs do not generally produce as much milk as the Saanen breed but have consistently good udders and are known for their persistent milk production over long periods. Fat yield is usually between 3% and 4%.

The breed performs at its best in cooler conditions and it is reported to be the least suited of the dairy breeds to tropical conditions.

Toggenburgs are a compact, robust, dairy-type animal (that is, with a dished or straight facial line and wedge-shaped body). They are usually slightly smaller than the other Alpine breeds. The does weigh at least 55 kg. The average height, measured at the withers, is about 79 cm for does and 90 cm for bucks.

Colour varies from deep chocolate brown to pale fawn and the coat is generally short and fine though longer coats are common. Toggenburgs have white or cream markings on various parts of their body. These markings may fade with age. Horns and tassels may or may not be present at birth. The ears are erect and point slightly forward. The muzzle is generally broad.

Toggenburgs have a decided personality and character, are very alert and extremely active. As a breed, they tend to group together and respond well to training, so therefore adapt easily to machine milking. The high-producing Toggenburg doe should also be an efficient reproducer. She should have a mild temperament and appear alert and feminine.

The udder should be well developed, not fleshy, and have a collapsed appearance and a soft texture after milking. It should be round or globular, but not pendulous or ‘split’ between the halves. The udder should be carried high and well under the body. Good udder attachment is particularly important.

The jaw should be square (not overshot or undershot) and the teeth should be sound. The muzzle and nostrils should be wide, the lips broad and the eyes set well apart. The neck should be long, slim, of good depth and connect evenly with the withers and shoulders.

The Toggenburg doe should stand and walk without dropping at the pasterns. The legs should be well boned, straight and parallel, not cow hocked. They should be placed squarely under the body. The thighs should be thin, allowing adequate room for the udder. 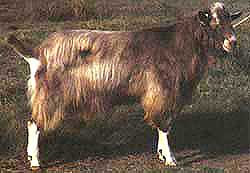 The Toggenburg buck’s ability should be gauged by his reproductive performance and the quality and performance of his offspring. The buck should have good conformation and depth of body, be masculine but not coarse in appearance, and have vigour. He should be strong though not heavily boned, and have good firm legs.

The testicles should be of good size, well balanced and firm. The scrotum should be well placed, not divided, and allow the testes to hang away from the body (not excessively).

Polled bucks are not generally used in breeding programs as offspring resulting from matings with polled does may be born as either intersex females or sterile males. If polled bucks are used, they should be mated only with horned does.