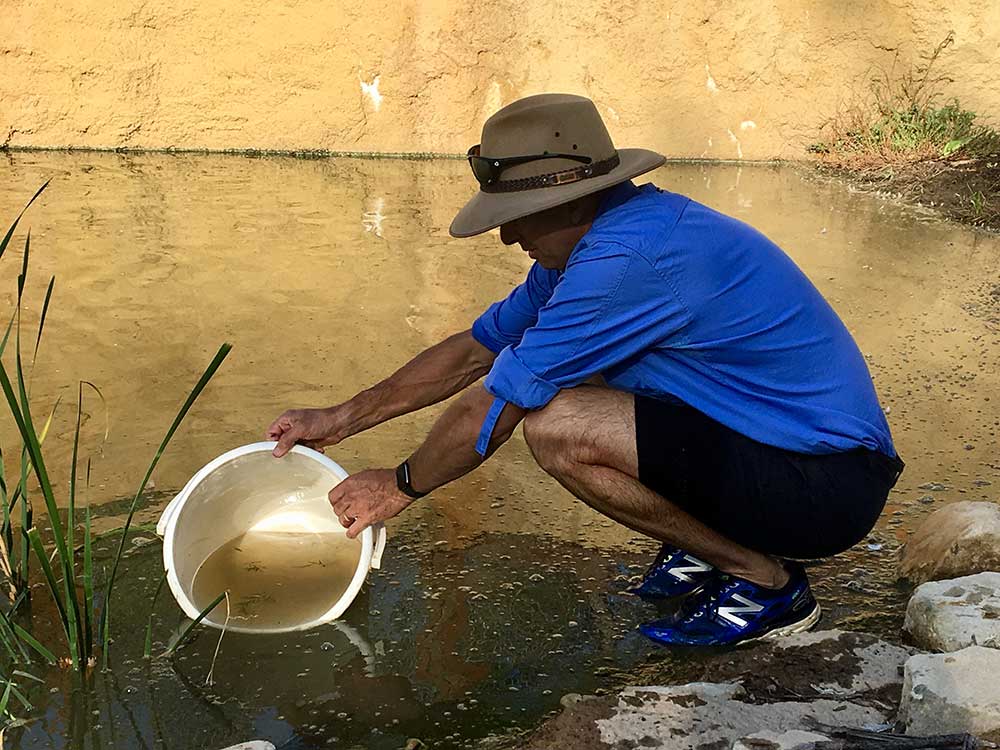 The NSW Department of Primary Industries (DPI) has rescued a total of 59 endangered Southern Purple Spotted Gudgeons from drying pools in two creeks in the Macquarie River catchment and relocated them to refuge sites, including Taronga Western Plains Zoo.

“Relocating fish is generally not a preferred solution because of the additional pressure it places on fish that are already stressed,” Dr Daly said.

“However, DPI Fisheries made the decision to proceed with this relocation due to the deteriorating water conditions in several isolated, drying pools and the high likelihood that all the endangered fish located there would perish without intervention.

“The fish were removed from drying pools in two creeks over the last fortnight and transported by road in aerated and temperature-monitored holding tanks. Twenty-one fish were released into a spring-fed refuge on private land and 38 were released at the Zoo.

“DPI Fisheries also thanks the private landowners involved for their support in helping to protect these little threatened fish on their properties.”

Zoo Director Steve Hinks said he was thrilled the Zoo could assist in providing a home for this endangered species.

“Conservation is at the core of everything that we do,” he said. “This is another way we can play a role in helping to secure a future for an endangered species.”

The Southern Purple Spotted Gudgeon is a small freshwater fish native to Australia, which was first recorded in inland NSW in 1983 and listed as an endangered species in NSW. The fish grow to 15cm in length and are generally found in slow moving rivers, creeks and streams.

Southern Purple Spotted Gudgeons were previously widespread in the Murray, Murrumbidgee and Lachlan River systems and tributaries of the Darling, but the population has experienced a significant decline in recent times and they are now extremely rare in inland NSW.