What happens at Grafton

The Grafton Primary Industries Institute (GPII) is located on 830 ha at Trenayr, approximately 10 kilometres north of Grafton. The Institute is unique in NSW by providing operational and research functions for agriculture, biosecurity, fisheries and forestry from the one location.

Cattle grazing, cropping, timber and fisheries are presently the mainstay primary industries of the Grafton district and these diverse coastal industries are reflected in the wide range of programs at the Institute.

The Institute has been involved in the evaluation of many enterprises to assist primary producers to respond to changing needs. Many types of crops, from fruit trees (mangoes, lychees, citrus) to crops such as tobacco and pineapples, have been evaluated on the property. More recently the focus for crop development has included maize, sugar cane, soybean, triticale, barley, wheat, chickpea, faba bean and forage and grain oat. With the North Coast of NSW being the single largest soybean production area in Australia, the soybean research program at Grafton is of particular regional and national importance.

Livestock enterprises have included beef and dairy cattle, pigs, poultry and aquaculture. Grafton was the research centre that demonstrated the benefits to the beef industry in crossbreeding Bos indicus and Bos taurus cattle. At present the institute forms the major component of the North Coast livestock operation with the ability to carry around 800 head on improved pastures with excellent water security.

Research and advisory work at the Institute is presently directed at the control and eradication of various terrestrial and aquatic weeds by chemical, biological and mechanical means, and through the provision of high quality information resources such as the NSW Weedwise app. Priority weeds include salvinia, cabomba, cat’s claw creeper, Madeira vine, giant Parramatta grass and lantana.

The Institute also houses the Grafton Fisheries Centre that has pioneered aquaculture of freshwater species such as Silver Perch, and now retains populations of several threatened wild species, including the Eastern Freshwater Cod, for breeding and restocking purposes.

The Forestry Corporation of NSW also operates from the site and conducts a wide range of programs supporting the timber industry. These include Grafton Forests Technology Centre, Production Nursery, Northern Region and North East Region. Research across agriculture, fisheries and forestry is conducted at the Institute. The Institute has a range of research, education, farming and community resources. 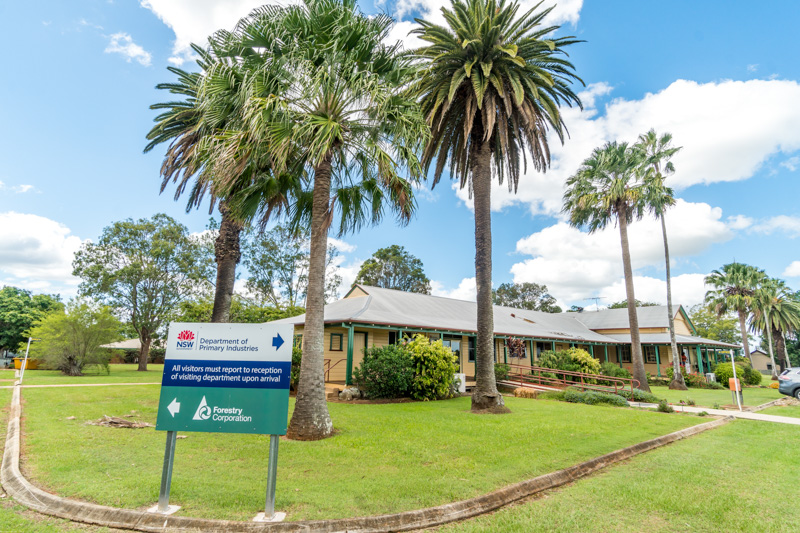 Established in 1902, the Institute’s primary focus was to conduct crop and livestock research. Located on the north coast of NSW, the Institute experiences a sub-tropical climate.

Our facilities and Services