Assessing cattle enables beef producers to determine the suitability and readiness of their animals for different markets. Since markets differ in their requirements for weight (live or carcase), fatness, age (dentition), and other factors, the ability to assess these traits directly affects the price received, and therefore producer profitability.

Live cattle assessment can include estimates or measurements of:

Assessing fatness can serve several purposes including estimates of P8 and rib fat depths that are required for carcase specifications; fat scores that may be required for live markets and that are reported for saleyard markets, and fat scores in breeding females that may impact fertility (Table 1). Fatness can be assessed visually, manually and objectively or by some combination of these methods.

Fat depth can also be assessed by manually palpating animals. The most informative locations are those where fat overlays only bone, so that fat can’t be confused with muscle. Manual palpation and feeling for tissue softness on the pin bone, hip bone, long ribs, short ribs (this position is less accurate when animals are heavily muscled) and the back line (Figures 2 and 3) allow fatness to be estimated.

If there is no ‘give’ or softness felt at these sites then the animal has less than 4 mm of fat at the P8 site. If some softness is felt, this indicates 4-7 mm fat at the P8 site while if the tissue is easily depressed P8 fat depth is more than 7 mm. It is critical to regularly calibrate fat assessments with objective live (ultrasound scanner) and carcase data.

Live animal fatness can be objectively assessed using ultrasound scanning at the P8 or rib (12/13th) sites. The P8 site is defined as the point at the junction of a line centred on the crest of the third (high) sacral vertebra and a line parallel to the backbone, centred on the pin bone (Figure 2). Rib fatness is assessed on the longissimus dorsi (eye muscle) at the carcase quartering site, usually between the 12th and 13th ribs. This position is found by locating the last long rib (13th rib) and moving ¾ of the width across the eye muscle away from the spine. A range of ultrasound scanning devices can be used to determine subcutaneous fat depth at these positions on the live animal. Muscling is scored on a scale from A (very heavy) to E (very light). This scoring system can be increased to a 15 point scale by including pluses and minuses around each score (e.g. A+, A, A-… to …E+, E, E-). Muscle score describes the shape of cattle and is the degree of thickness or convexity of an animal relative to its frame size, after adjustments have been made for fatness. Note that very fat (more than 18 mm at the P8 site) animals may look more muscular than they are.

Market analyses have shown that increasing by one muscle score eg from D to C, increases dressing percentage by approximately 1% at processors while saleyards prices increase by $0.15 to $0.30 / kg. Retail beef yield (saleable product for processors), also increases with higher muscle scores and so the development of technology for estimating retail beef yield may result in further premiums for well muscled carcases.

Frame score is a description of an animal’s hip height for a given age (in months). It is a measure of the overall size of the animal and is generally related to its growth potential, maturity type and mature size. Frame score is often linked to ease of fattening, though this is also associated with muscling, breed differences and individual genotypes.

Frame score is assessed in a range from 1 to 11 where:

The recommended point for height measurement is a point directly over the hips from a level surface (Figure 4). It is measured in centimetres. 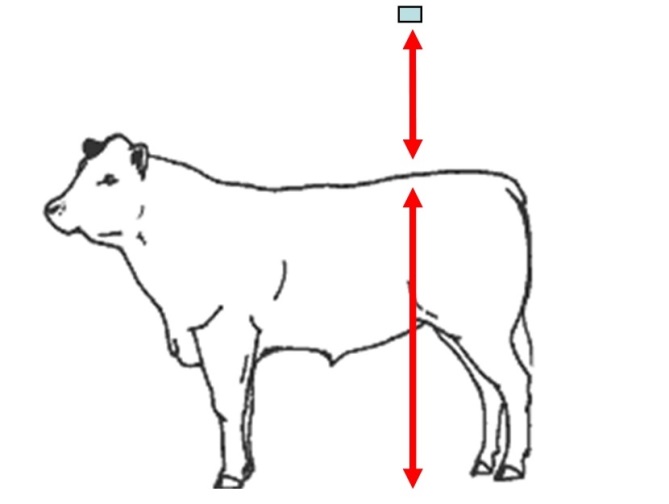 Further information and charts to convert hip height and age into frame score are embedded in the BeefSpecs calculator.

Dentition is used to estimate age in live animals and carcases. Note that the MSA grading scheme uses ossification to measure age, as it has been shown to be more accurate, and a better predictor of meat quality. Cattle have ‘milk teeth’ but are described as having ‘0 teeth’, prior to the appearance of two adult or permanent teeth when the animal is approximately two years old (Figure 5).

Note that the age when adult teeth first appear can vary by several months, and is affected by breed (Bos indicus teeth later) and other factors.

Two additional permanent teeth appear approximately every 6-8 months thereafter, up to a maximum of 8 teeth. Dentition is used for marketing purposes, with more than 2 teeth conferring penalties in feedlot grids and most carcase grids (notable exceptions include the ‘certified grass fed’ markets where 4 tooth animals are accepted).

In breeding herds, cows with worn teeth or broken mouths (missing teeth) are less likely to go back in calf, particularly in drought. 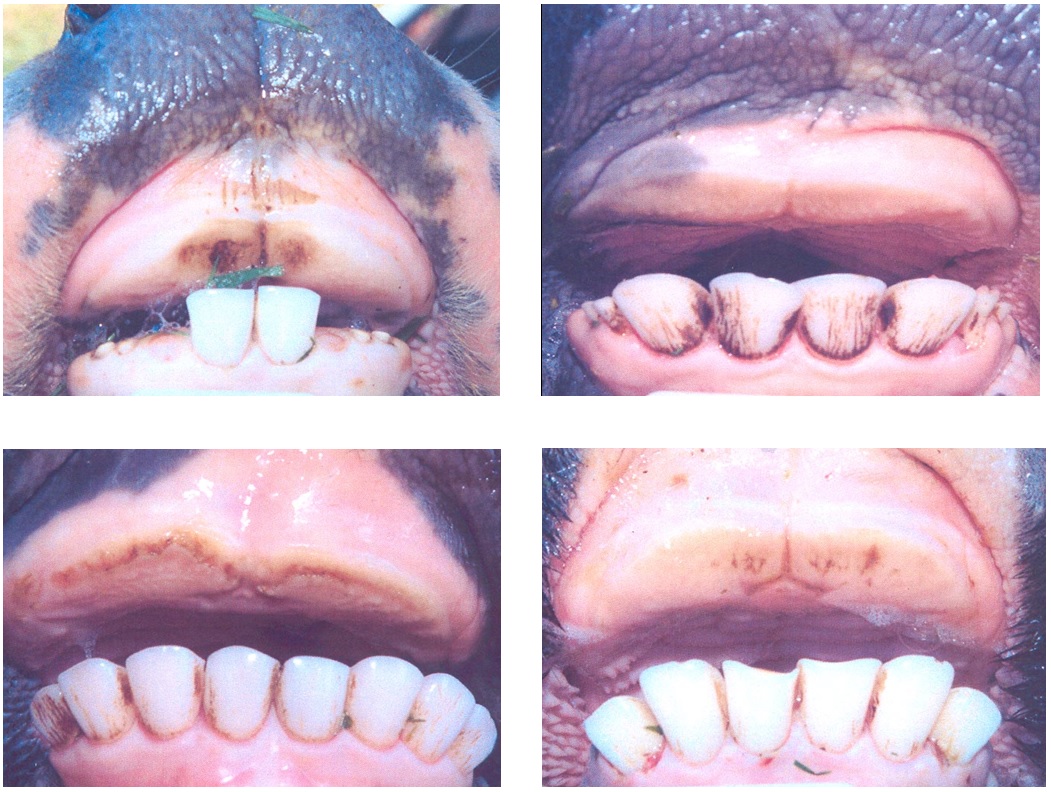 Estimating liveweight is difficult as it is affected by numerous factors such as time off feed (curfew period), breed, nutrition history, muscling, fatness, sex and frame score. As a result, electronic scales are the best way to measure live weight. Liveweight can be described as full liveweight (weighed directly from the paddock) or as empty/shrunk liveweight (weighed after animals have been removed from feed and/or water). Note that empty liveweights are generally 91-94% of full liveweight but can be as low as 86% in drought affected stock.

Note that dressing percentage is different to yield. Also referred to as retail beef yield or saleable meat yield, this is the saleable product left after the carcase has been broken down to remove bone and excess fat, leaving primal cuts and 85CL (chemical lean) trim.

Sex has been shown to have a small impact on meat quality (heifer beef is slightly superior) but is often segregated in processor markets due to perceived differences in muscling and therefore yield. Feeding heifers can be more problematic due to unwanted pregnancies, oestrus behaviour and slightly slower growth rates.

Breed can be difficult to determine if the history of the animal is unknown but can have a large bearing on market suitability and acceptance. An example includes the penalties associated with B. indicus but not tropically adapted B. Taurus or sanga cattle (eg Senepol, Belmont Red), in the MSA grading scheme. A useful visual guide is contained in the Beefspecs Calculator http://beefspecs.agriculture.nsw.gov.au/

Temperament can be assessed using subjective measurements, such as crush and yard scores, where animals are rated on nervous and/or aggressive actions (head held high, salivation, tail flicking, urination, pawing the ground, mock charges etc). It can also be assessed objectively using a flight time test where the time taken for an animal to travel a set distance after leaving the crush is recorded. Research has shown significant relationships between temperament measurements and meat quality in B. indicus derived breeds. As well as posing a risk to workers and other animals, poor temperament is heritable and should not be tolerated.

Structural soundness is most important for breeding stock longevity and also for cattle going into long feeding regimes in feedlots. In both of these stock classes, correctness of feet and legs is paramount.

The DPI Appraisal page has more information about cattle scoring and assessment etc.

This Primefact is based on an original publication written by Brett Littler.