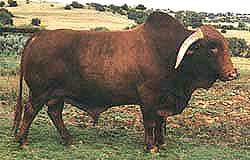 Africander cattle developed from the native Khoi-Khoi cattle of the Cape of Good Hope which are thought to have arisen from the longhorned Zebu and the Egyptian longhorn.

The breed was first imported into Australia in small numbers in the early days of colonisation and reintroduced in the early 1950s via the USA when the CSIRO imported five bulls and two females to Belmont Research Station, near Rockhampton.

The first release of stock to the public in Australia took place in 1960, when purebred bulls from Belmont Research Station were sold at open auction.

The breed is currently found in central and western Queensland but shows potential for other areas, particularly the arid and semi-arid regions of northern Australia.

The Africander is red in colour but may vary from light tan to a deep cherry red. The animals are horned, the horns being flesh to creamy white in colour, with amber tips. 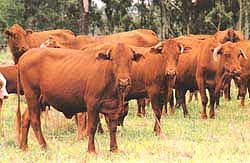 Like other Zebu breeds, the Africander is heat-tolerant and has the ability to do well under harsh conditions. Tick-resistance of the Africander is lower than that of the Brahman but superior to that of the European and British breeds of cattle and is quite adequate for most areas of northern Australia.

The Africander has a good temperament, and under extensive management conditions is easier to handle than the Brahman-derived breeds.

Africanders are medium-sized with loose skin and large drooping ears. Bulls have the typical Zebu hump of muscle and fat which rises to 7 cm or more above the topline.

The majority of Africander breeders place emphasis on the continued improvement of traits which are economically important, such as growth rate, tick resistance and fertility. Performance tests are generally incorporated with registration of bulls.

The author thanks the Australian Africander Belmont Red Association for their assistance in preparing this Agfact.