It is believed that the Chianina breed began in the Bronze Age in about 1500 BC, derived from animals of Asia and Africa brought into Italy. The Chianina are among the oldest, if not the oldest, of purebred bovine breeds.

In the Roman times of 300–200 BC, the breed was used primarily for draft and sacrificial purposes. With the coming of Christianity and on into the Middle Ages, times became more practical; the medieval peasant simply could not afford to keep an animal that could not work well, and those animals that could not conform were butchered. This practice may have been the first, albeit rustic, breeding program. The legacy of this ‘breeding program’ is great uniformity within the breed, their excellently developed legs and hard hooves, and their endurance qualities and docility.

In 1974 the first Chianina semen was imported into Australia. The semen had been collected from 13 bulls in Canada, and to this day has formed the development of the Chianina breed in Australia. More recently, semen has been imported direct from Italy.

Although numbers in Australia are still small, Chianina cattle can be found in every state, with the largest number being in Queensland. 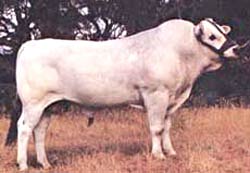 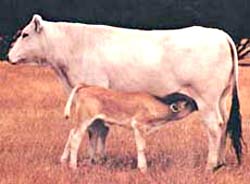 A full-blooded Chianina can offer more potential growth for a single cross than most other breeds. This hybrid vigour can be achieved over Angus, Hereford, Brahman, Sahiwal and other British and tropical breeds.

Irrespective of the breed of foundation cow used, the performance of the progeny will be improved by crossing with the Chianina breed.

The Chianina Society of Australia

This Agnote is based on information provided by the Chianina Society of Australia. Their contribution is gratefully acknowledged.

Photos supplied courtesy of the Chianina Society of Australia.