The Gelbvieh breed (pronounced ‘Gel-fee’) originated in Bavaria in Germany in the 1800s. It was once a triple-purpose breed (for meat, for milk and as a draught animal), and was developed from several local strains of Red-Yellow Franconian cattle. ‘Gelbvieh’ translates literally as ‘yellow cattle’. The present breed society in Germany was established in 1899.

The first Gelbvieh semen arrived in Australia in 1976, but it was not until 1979 that it was used in Queensland. Since 1989, over 7000 animals have been registered. The first purebred, graded-up Gelbvieh was recorded in 1991 by the Norolle Cattle Company, Millmerran, Queensland. By the early 1990s, a wide range of genetics (as live animals, semen and embryos) was being imported.

The breed is increasing in number throughout Australia. There are currently nearly 7000 registered animals in the Australian Herdbook, and over 145 members in the Australian Gelbvieh Association. Registered Gelbvieh cattle are located in Queensland, Victoria, Tasmania, New South Wales, South Australia, Western Australia and the ACT. 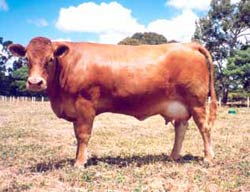 The Gelbvieh breed is a medium-sized, maternal, European breed. It generally has a short coat, and ranges in colour from black to honey (which may be dark or light).

The average weight of a mature bull is 1000 kg, and mature cows average 750 kg. Birthweights for calves average 37.5 kg.

The original Gelbvieh breed was horned but there has been a preference for polled animals in more recent times. In North America and Australia, many Gelbvieh breeders select polled gene carriers, which results in an increase in the number of polled animals.

Gelbvieh are docile, with a quiet temperament. This usually makes them easy to handle, thus reducing their stress (which can adversely affect the carcase) during transportation and prior to slaughtering.

Their full skin pigmentation aids in their adaptability to hot conditions. There have been reports from South Africa that Gelbvieh cattle show a tolerance to both heat and ticks; similar information is being received from Queensland. (Contact the Australian Gelbvieh Association for details.)

The Meat Animal Research Center at Clay Center, Nebraska, USA, started comparative breed experiments in the 1970s, and by the 1980s it had ranked the Gelbvieh highly in maternal traits and in ‘weaning weight per cow exposed to breeding’. (Contact the Australian Gelbvieh Association for details.)

The Gelbvieh has the earliest puberty of any beef breed (only the Jersey is earlier); therefore in normal conditions they can be joined at 12 months, to calve at 21 months (compared with 24 months, or more, with other breeds). This gives the first-calf Gelbvieh heifer 15 months before it has to calve again as a 3-year-old. This extra 3 months seems to be advantageous to the young heifers, allowing them to continue to grow, whilst feeding their calves and being ready to return to service for their next pregnancy. Calves are of moderate size, but tend to grow quickly, aided by the high milk yield of their dams. 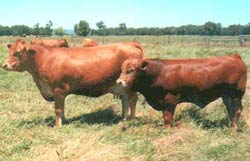 Gelbvieh cows are regarded as being very fertile. They generally produce high weaning weights — usually more than 200 kg at 7 months — and the yearling rates are normally better than 300 kg.

Gelbvieh cattle are a lean breed. Of all the breeds studied at Clay Center, they had the largest rib eye muscle area per 100 kg. Thus they have a high cutout yield.

Gelbviehs are now being used increasingly (due to hybrid vigour) as a part of cross-breeding programs, to improve maternal performances, weaner marketability and carcase quality.

In 2000, the Composite Cattle Breeders Association of America performed a study of breeding plans for composite cattle. Of the ten breeding programs developed by the 100 participants, eight used Gelbvieh as their continental (European) component. Thus, in America, Gelbvieh is regarded as the ‘Continental Breed of Choice’ based on overall profitability.

Further information is available from: