The Hereford originated in Herefordshire in south-west England and is one of the earliest British cattle types to have been systematically improved or upgraded. In early times they were used as work oxen for 6 or 7 years before being fattened for market, those used for ploughing developing into enormous beasts.

The purebred beef strain was not established until the early 1700s, with early cattle ranging in colour from red, with a white head, to grey and light grey. They were first imported into Australia to Hobart in 1826, not reaching the mainland until 1827, with further importations being made in the 1840s.

The Hereford is one of the most numerous of all breeds in Australia. It is found throughout the country in all extremes of environment, but particularly in the central and south-eastern States, and in South Australia and southern Western Australia. 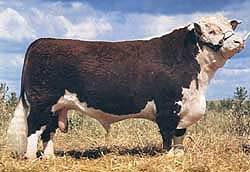 The Hereford colour is characteristic, with the body colour varying from rust brown to a deep rich red. Face, crest, dewlap, underline, switch and legs below the hocks are characteristically white. The distinctive white face tends to dominate in crosses with all other breeds and may have been a feature in establishing the breed’s popularity.

Ability to do well on a wide range of pastoral conditions and to assimilate roughage, coupled with its good fertility, foraging ability and docility, account for its success. Depending on the level of nutrition and management, the breed can be produced as top-quality carcases ranging from heavy, marbled and fat, through to small, young and lightly finished.

For further information, see the website of the Australian Hereford Society.

The author thanks the Australian Hereford Society Limited for their assistance in preparing this Agfact.