This ancient breed developed in central France in the province of Limousin and was used for draught and beef production under pastoral conditions. Selected for superior meat qualities they were left to fend for themselves even in winter, when most cattle in European countries were housed. The breed has spread to many countries outside Europe including South America and, more recently, Canada, the United States and Britain. Semen was first introduced into Australia in 1971 and breed numbers have increased steadily since then.

The Limousin is mostly confined to the more intensive high-rainfall areas of the southern States and Western Australia, although the breed is rapidly spreading to other areas. 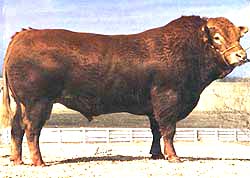 The Limousin is a rich gold colour, with lighter circles around the eyes and muzzle, and shading to a lighter colour on the legs. The skin is free of pigmentation. The head is small and short with a broad forehead, and the neck is short. Horns are yellow at the base and darken towards the tips; they are at first horizontal, then curve forwards and upwards.

Smaller than the Charolais and maturing earlier, the Limousin is intermediate in size and maturity between British breeds and most other European breeds. Features of the breed are its hardiness, regular breeding, easy calving, good milking qualities, fast growth and the production of exceptionally high-yielding carcases with little fat.

For further information, contact the Australian Limousin Breeders Society at:

The author thanks the Australian Limousin Breeders Society for their assistance in preparing this Agfact.