Bull infertility is a major cause of production loss in many beef breeding herds. It can result from:

In Bos indicus bulls, the most common physical abnormality causing infertility is poor sheath/penis structure. This Agfact describes both desirable and undesirable sheath structure. It is a guide to assist selection of Bos indicusbulls for high fertility.

The ideal sheath (see Figure 2) is one that:

Structural faults can predispose breeding organs to injury and cause loss of bull use.

Faults such as these predispose bulls to injury, infection, prolapse of the prepuce and subsequent loss of use during their working life. These problems also worsen with age so that if they are apparent in young bulls, they will probably become more so as the bulls age.

Sheath too pendulous and loosely attached 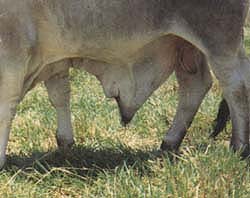 The closer the sheath hangs to the ground, whether well angled or not, the more likely it is that the sheath will be irritated or injured. It may even be stepped on by the bull himself when rising after lying down.

Bulls with too much loose skin in the sheath and navel area can have trouble in accurately controlling the sheath during service.

Avoid selecting a bull with a heavy navel fold as it can interfere with erection and injure the penis at service. The curve of the sheath should closely follow the underline and be evenly suspended but firmly attached for all its length.

A pendulous sheath in conjunction with a big, heavy penis is very undesirable.

Sheath/penis too heavy and large The disadvantage of a large, heavy sheath/penis is that it is subject to injury at service by being harder to control and less flexible. A thick penis or prepuce is also often related to excessive membrane within the sheath—a bad trait as it is associated with prolapse.

These structural faults are more common in Bos indicus derived breeds than pure Bos indicus breeds such as the Brahman, Sahiwal and Red Sindhi.

Usually, the pure Bos indicus bull will have a loose and often pendulous sheath with a light, small penis. A light penis in a loose, pendulous sheath is preferable to a penis that is heavy and coarse—it is more maneuverable and less likely to be injured.

Some bulls have 5 to 10 cm of prepuce protruding below the end of the sheath. Providing the prepuce is moist, fresh and pink, this is not a problem because it means that the prepuce can be retracted. It is, however, a warning sign that the bull may prolapse in future. Although such bulls often have a normal working life, the risk is there.

Polled bulls are more likely to have this problem than are horned bulls.

Where the protruding prepuce is continually exposed, it means that it cannot be retracted into the sheath. This predisposes such prepuces to become dry, swollen, dirty and infected due mainly to a poor or absent blood supply. This is a serious problem as it indisposes the bull for mating.

Poor attachment to the body in the navel region

A sheath will often break away from its bodyline near the navel and hang straight down for 5 to 10 cm. Avoid bulls with this condition as it predisposes the lining of the sheath to a prolapse.

Also, although they may serve normally for a couple of years, the risk of injury is always present.

When selecting Bos indicus bulls, aim for those that have both loose skin and a desirable sheath.

Avoid bulls with a pendulous sheath, too much skin and a heavy, coarse penis as they are the source of mating problems and economic loss.

Selection is always a compromise. While minor deficiencies in sheath/penis structure can be tolerated if the bull has other desirable traits, remember that at all times the risk of penis or sheath injury at service directly relates to the number and severity of faults.