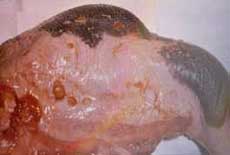 Wooden tongue (actinobacillosis) and lumpy jaw (actinomycosis) occur throughout Australia, in cattle of all breeds, age and sex. Wooden tongue is more common than lumpy jaw. Usually only a small percentage of animals are affected at any one time. The term ‘actino’ indicates that the inflammation caused by these bacteria results in the formation of pus containing sand-like granules. The granules are actually clumped colonies of bacteria.

The bacteria, which live in the mouth, invade tissue through breaks in the lining of the mouth cavity. Low-quality dry stalky feed, grass seeds, coarse hay and scrub can cause mouth abrasions which allow entry of infection. These factors are commonly associated with dry times and drought. Breaks in the gums that occur as teeth erupt in young animals can also predispose to lumpy jaw. Ironically, increased incidence has also been reported after flooding. 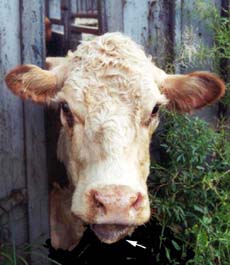 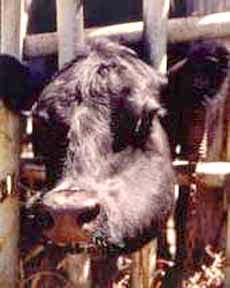 Wooden tongue occurs almost entirely in soft tissue. The tongue and lymph nodes of the head are commonly involved. The disease has a sudden onset, with the tongue becoming hard, swollen and painful. Affected animals are unable to eat or drink and there is rapid loss of condition. They drool saliva and may appear to be chewing gently. The tongue often protrudes between the lips. Nodules and ulcers may be visible on the sides of the tongue.

As the disease becomes chronic, fibrous tissue is deposited in the tongue, which becomes hard, shrunken and immobile, hence the name 'wooden tongue'.

In many cases the area between the two bones of the lower jaw is swollen, giving the appearance of 'bottle jaw'. The lymph nodes around the jaw may become infected, and cause swellings under the skin which can vary in size from a golf ball to a football. These are thick-walled abscesses that may break out to the surface and discharge a creamy pus containing the characteristic granules. These abscesses can also occur internally, and when they are detected in the internal lymph nodes during abattoir monitoring, they may be confused with tuberculosis. Wooden tongue can also affect sheep. 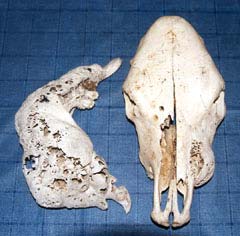 Lumpy jaw produces lumps on the upper and lower jawbones, hence the common name 'lumpy jaw'. These lumps are immovable hard swellings of the bones, usually at the level of the central molar teeth. The swellings develop slowly and may take months to reach the size of a tennis ball. They consist of honeycombed masses of thin bone filled with yellow pus. If neglected the swellings may become very large. In advanced cases, sinuses or openings develop and discharge small amounts of sticky pus containing gritty yellow granules. Unlike the case with wooden tongue, the local lymph nodes do not become involved.

Lumpy jaw may be well advanced before external signs are visible. Difficult breathing due to involvement of the nasal bones may be the first sign.

As the disease progresses, chewing becomes more difficult and painful, resulting in loss of condition.

The earlier the treatment is instigated, the more likely it is to be successful. Early treatment of wooden tongue is usually successful, but advanced cases may fail to respond. The most effective treatment is probably iodine therapy. The initial dose of Sodide® (sodium iodide) is best given intravenously by your veterinarian. Follow-up subcutaneous injections at weekly intervals for several weeks are likely to be necessary in deep-seated cases. However, subcutaneous treatment alone may be effective.

Treatment with tetracyclines daily for five days is also reported to be effective.

Advanced cases may require surgical drainage, and opened abscesses should be irrigated or swabbed with iodine for several days. All treated animals should be observed regularly, as relapses can occur.

Treatment of lumpy jaw is similar, but is often ineffective. If the disease is detected early, it may be better to dispose of the animal while it is still in good condition. Only the head should be condemned by meat inspectors, unless the lesions have spread elsewhere in the body.

The abscesses often seen in the lymph nodes of the head with wooden tongue may break open and regress for a time, but usually recur.

Lumpy jaw is usually progressive. As the bony swellings continue to enlarge, gross disfiguration of the head can occur, much condition will be lost and death may result.

In both conditions, the disease often appears to be dormant for a time, but relapses are very common.

Both bacteria are thought to be normal inhabitants of the mouth and/or rumen. The bacteria causing lumpy jaw can survive for considerable periods in the ground. Those causing wooden tongue, however, only survive for a few days. A constant lookout for new cases will further help to reduce environmental contamination and allow better treatment of these early infections.

Alteration of grazing management to try to reduce exposure of cattle to coarse or prickly feed will also help to reduce the prevalence of these conditions.

These diseases can be confused with grass seed abscesses or foreign bodies in the mouth.

Contact your veterinary practitioner, local District Veterinarian or Veterinary Officer for help with the diagnosis and control of these conditions.