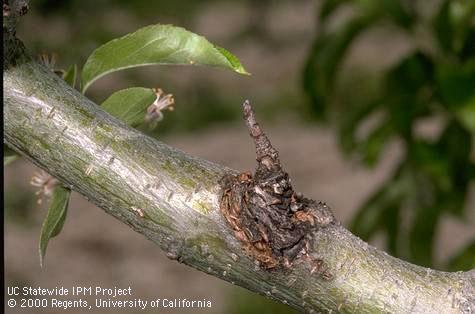 European canker (Neonectria ditissima) is an exotic plant pest not present in Australia. This plant disease is a serious threat to Australia’s apple and pear industries and amenity plantings.

European canker is caused by the fungus Neonectria ditissima. It is a pathogen which enters host tissue through wounds or immature scar tissue.

European canker was found in orchards in Spreyton, Tasmania in 1954. A long term treatment and management program was undertaken until 1991 when the pathogen was eradicated.

European canker is first seen as a reddish-brown spot around a leaf scar, spur or pruning wound, usually in late spring or early summer.

The canker develops and forms ring shaped cracks in the bark, which may appear swollen. If the canker girdles the trunk or branch, any shoots above the canker will die. A ridge or collar of healthy tissue walls off the canker.

Infection from well established cankers can enter woody tissue and express as dark brown staining which extends beyond the bark lesions.

European canker is present in all regions of commercial apple and pear production throughout the world except Australia.

Fruit, bark and above ground shoots, stems and branches are host plant parts that can carry the pathogen either internally or externally. Foliage is not affected.

At risk industries for the spread of European canker are orchards, nursery and garden, hardwood timber and mulch.

A wide range of deciduous trees are susceptible to European canker.

Once infection occurs, the fungus slowly penetrates bark tissue. Lesions become apparent 2 to 3 months later in spring. Cankers are formed and may encircle and kill twigs and small branches.

Older cankers produce airborne spores (ascospores) that can initiate new infections at a distance from the original canker.

Long distance spread of European canker is primarily the result of the movement of nursery stock and infected material.

Airborne spores function mainly to initiate new infections while the water-borne spores (conidial) serve to intensify the disease in trees that are already infected.

European canker is managed by pruning out cankers and by using protectant fungicides.