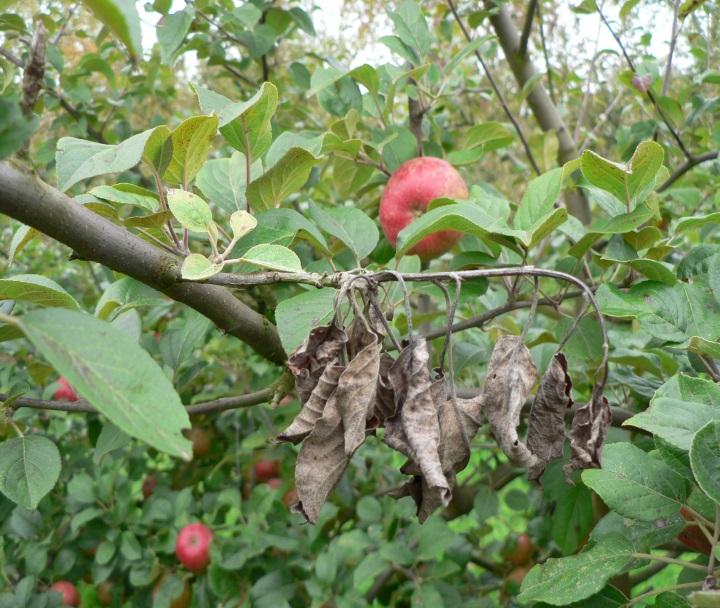 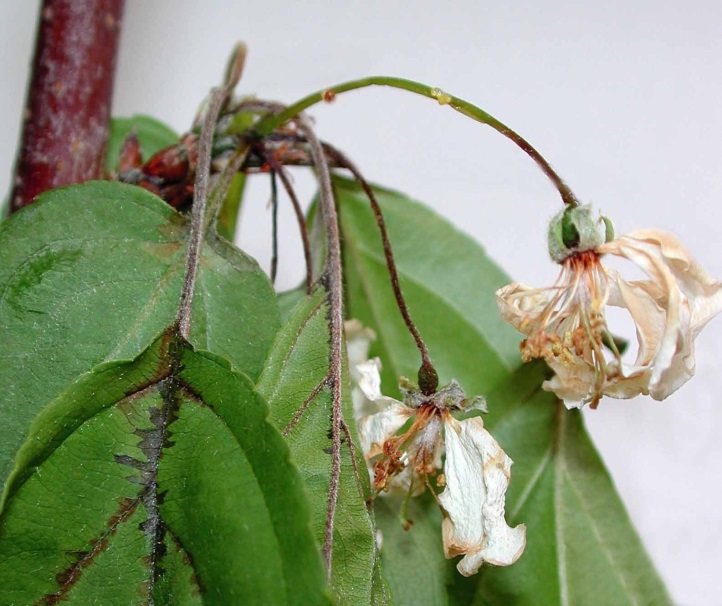 Fire blight (Erwinia amylovora) is an exotic plant pest not present in Australia. This plant disease is a serious threat to Australia’s apple and pear industries.

Fire blight is a bacterial disease caused by Erwinia amylovora.

Fire blight can appear as different symptoms, depending on which plant parts are affected and seasonal timing. The most typical symptom is the shepherd’s crook (Figure 1).

The first symptoms of fire blight can be seen in the flowers as blossom blight (Figure 2). In the early stages of infection blossoms appear water-soaked and gray-green but quickly turn brown or black.

Generally the entire flower cluster becomes blighted and killed. Bacteria move from the flowers into the shoots.

Shoot blight is the most obvious symptom of fire blight and can appear one to several weeks after petal fall.

The leaves and the stem on young shoot tips turn brown or black and bend over into a characteristic shape similar to the top of a shepherd’s crook or candy cane (Figure 1).

Small droplets of sticky bacterial ooze can often be seen on the surface of fire blight shoots when the weather is warm and humid.

Under favourable conditions shoot blight infections will multiply and continue to expand down the stems. When the bacteria invade and kill the cambium tissue of the branch, all flowers, leaves and fruit above the girdled area die.

Infected trees appear to be scorched by fire, hence the name ‘fire blight’.

Infected fruit gradually dries and remains attached to the branch rather than dropping.

Cankers on branches or stems appear as dark discoloured slightly sunken areas with a narrow callus ridge along the outer edge.

The inner bark under the bark associated with a canker may change colour from green to brown depending on the host plant variety.

The entire tree on a susceptible rootstock can wilt and die if these areas become infected.

Fire blight bacteria overwinter in blighted branches and at the edge of cankers formed during the previous growing season.

As the weather warms in spring the bacteria multiply and ooze to the surface in sticky droplets.

Bacteria can be transferred from the active cankers to spring blossoms by insects and rain splash.

Once in the flowers the bacteria multiply rapidly and, when temperatures are greater than 18 oC, can build to very high levels. Bacteria can be moved from flower to flower by bees.

Infection does not usually occur unless the bacteria are washed by rain to natural openings at the base of the flower.

As the season continues and shoot growth slows and stops the shoots become progressively less susceptible to new infections. The rate at which bacteria move through woody tissues also slows down and cankers are formed.

Insects and rain move the bacteria to flowers and shoots. Infection occurs through wounds caused by insects feeding, wind-whipping and hail. Within the growing season bacterial ooze is produced from these new infection sites.

Further spread occurs as long as shoots keep growing and wounding of the tree occurs.

A wide range of plants in the Rosaceae (rose) family are affected by fire blight.

Fire blight hosts include fruit trees such as apple, pear and quince and amenity plants such as cotoneaster, crab apple, flowering quince and hawthorn.

Fire blight was first recorded in the USA in 1794 on apples in New York State. The bacterium is native to North America and is present throughout the continent where susceptible plants of the Roseaceae family are grown.

Fire blight is present in many regions of commercial apple and pear production.

Fire blight is not present in Australia.

There is no cure for fire blight.

Prevention is the best option for the management of fire blight.