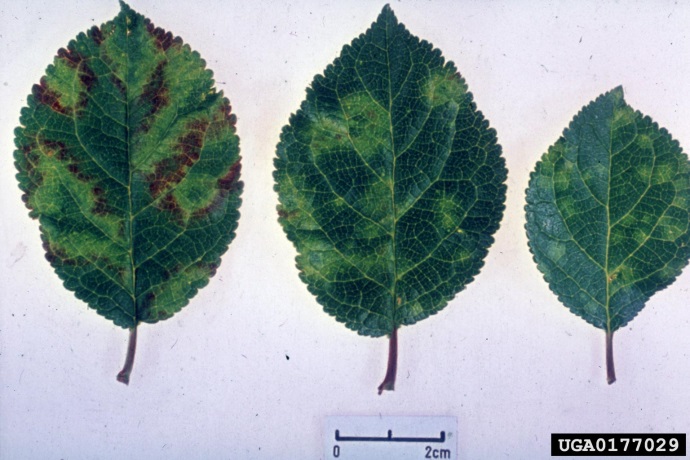 Plum pox potyvirus (PPV) also called Sharka of stonefruit is an exotic plant pest not present in Australia. This disease is a serious threat to Australia’s stonefruit industry.

Plum pox potyvirus is a notifiable plant disease in NSW.

Plum pox disease symptoms are variable. They can be expressed erratically and may be confused with other disorders such as nutrient deficiencies or injury caused by pesticides. Expression of symptoms varies depending on the host, the cultivar, the strain of plum pox, the age of the infected tree and the environment.

In some years symptoms may appear in spring and early summer but fade or disappear during hot weather only to return when the weather cools. Plums and apricots are more severely affected than peaches and nectarines.

Infected trees rarely die but do become less productive as the disease progresses. There is a measurable decrease in tree growth on severely infected trees. Fruit may drop prematurely.

Plum pox develops slowly inside the tree, usually affecting only one or two branches at first but spreading through the tree as the virus multiplies over a period of several years.

Leaf symptoms include pale chlorotic or yellow rings, spots and blotches, yellow line patterns along veins and vein clearing. Leaf shape may be distorted. On some cultivars, spots may appear as dead or necrotic tissue. Some host cultivars do not show obvious symptoms.

Infection in green fruit may be seen as faint mottled yellow lines, patches and rings. As the fruit matures and ripens these markings remain yellow, surrounded by the normal blush colour of the fruit.

The uneven distribution of plum pox within an infected tree means that some fruit on the same tree may appear symptom-less while other fruit appears severely diseased. Infection reduces fruit quality by affecting fruit size, pigmentation and sugar content.

Fruit flavour is altered resulting in tasteless, bitter fruit which is unsuitable for either fresh market or processing. Keeping quality of infected unmarked fruit is reduced.

Leaves have pale green to yellow spots and blotches. On immature plum fruit, symptoms include green and yellow rings and blotches. As fruit ripens, the symptoms fade, but infected fruit drops from the tree prematurely.

Initial signs of the disease appear as yellowish zones along the veins of the first leaves to expand. This symptom is difficult to distinguish from other causes of yellowing along veins such as nutrient deficiency.

Occasionally peach cultivars with showy flowers may display colour breaking on the petals.

The natural host range of plum pox is the genus Prunus. All commercial stonefruit such as almonds, apricots, cherries, nectarines, peaches and plums are hosts of plum pox. Amenity Prunus species may act as important secondary hosts of plum pox.

Virus isolates vary in their expression on different hosts and not all strains or isolates infect the same host range.

Plum pox may be transmitted by many aphid species including the Green peach aphid (Myzus persicae).

Aphids can acquire the virus while feeding for as short a time as 30 seconds and can transmit the virus over 1-3 hours. Within an orchard plum pox can be spread by transient aphids as efficiently as by aphids which have colonised the orchard.

Plum pox symptoms were first observed on plums in 1917 in Bulgaria. The name Sharka is Slavic for plum pox.

Plum pox is widespread throughout eastern and western Europe and North Africa and has been reported from China, Chile, India and the USA.

Plum pox has not been detected in Australia or New Zealand.

There are at least four strains of plum pox virus but the Marcus (M) strain is the most virulent.

The efficiency of plum pox virus transmission by aphid vectors largely depends upon the virus strain, the host species, the cultivar and the aphid species.

The plum pox virus does not infect humans or animals.

The movement of infected propagation material such as budwood, rootstock or seedlings has spread plum pox throughout Europe. Seed transmission is possible but the frequency of occurrence is very low. There is no evidence that plum pox spreads on pruning equipment.

Once plum pox becomes established in an orchard the virus spreads from tree to tree by several species of virus-carrying aphids.

The most effective means of control is prevention.

No anti-viral treatments are available. Infected trees cannot be cured and must be removed to prevent further spread.