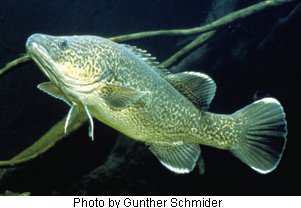 The Murray cod ( Maccullochella peeli peeli ) is the largest Australian freshwater fish. It is endemic throughout the Murray-Darling Basin , from south east Queensland , through NSW, into Victoria and South Australia . The Murray cod is a highly territorial top order predator; a fact which has until recently restricted its intensive culture. Cod can grow to over 100kg in the wild, however commercial fishing pressure and habitat destruction has caused wild cod populations to drastically decline.

Intensive production of Murray cod is a new sector, pioneered by industry with government agencies taking a recent role in R&D. Interest has been fuelled by reports of high market prices, however production in NSW has been moderate to date, with production dominated by 1-2 growers. Most production comes from intensive tank systems with some finishing in earthen ponds, however limited production also comes from extensive ponds. For the production figures see the NSW DPI aquaculture production reports.

Recent downward trends in market price for small fish (<1kg) has deterred some new growers, however industry is still in its infancy, and there is potential for further expansion. A number of production issues still need to be resolved eg feed development, disease management etc.

Murray cod is well recognised, with a commercial inland fishery that operated in western NSW until 2000. While fished for, wild caught Murray cod was always the highest priced fish on the Sydney Fish Market floor (>3kg product).

For the production figures see the NSW DPI aquaculture production reports. Traditionally best prices have been received for large fish ie >1.5kg. Most growers predict mean prices to fall as supply increases. Many growers have supplied live markets, but this is easily saturated, with product coming from Victoria, NSW, QLD and SA. Other species such as Jade perch and silver perch also compete in this market.

Some interest has been expressed in export markets however NSW growers are yet to reach critical mass for market developments. The appearance of cod as well as its premium taste suggests this product will do well exported to Asia.

Investors can obtain marketing information about farmed Murray cod from the following sources:

There are tools available to assist investors examine the economic viability of Murray cod. These include using tools such as Perchprofit Economic Information Package, of which the recirculation aquaculture model can be used for Murray cod.

Economic analysis for farms of variable sizes have also been undertaken in the following:

NRE, 2002. Proceedings of the 'Murray Cod Aquaculture: Now and Into the Future' workshop.