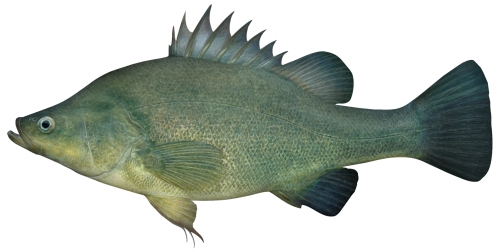 This species is a member of the family Percichthyidae. Adult perch are moderate to large in size and are bronze, olive green to brownish in colour overall with a yellow ventral surface. The forehead is distinctly concave above the eyes and the lower jaw is protruding. Juvenile golden perch feed on zooplankton (microscopic animals) while adults feed on fishes, molluscs and crayfish.

Golden Perch, also known as yellowbelly, callop, perch, Murray Perch or white perch, naturally inhabit the Murray-Darling river system (except at high elevations) and exist in the internal drainage systems of Lake Eyre and the Bulloo River. Recent evidence suggests that there may be a genetic difference between populations resulting in the existence of a separate species. The abundance of golden perch has dramatically decreased in the Murray-Darling due to migration obstruction and the alteration of flow regimes and temperature stratification following the construction of weirs and dams. Golden Perch have been translocated into other rivers of NSW, Queensland and the Northern Territory. They prefer warm, slow moving, turbid streams.