It covers an area of approximately 20 hectares, including the entire bay, rocky shores and beaches from the southern end of Manly Beach to the northern end of Shelly Beach Headland.

More than 160 species of fish have been recorded in the Reserve.

These fish species range from common temperate species through to tropical species that move south on the East Australian Current (EAC). Various species use the Reserve, including pelagic species (open water) that range widely, such as dusky whaler sharks, and sedentary species that would rarely leave the Reserve. Iconic species such as blue groper, cuttlefish and wobbegong sharks inhabit the Reserve and protected species such as seadragons, elegant wrasse and black rockcod also occur here.

The rocky shore has a diversity of habitats and associated marine life, including examples of each of the five types of habitats described for NSW rocky shores (platform, crevice, rock-pool, boulder and cobble habitats). Approximately 50 species of marine invertebrates have been recorded in the Reserve.

The Reserve and its surrounds are popular areas for recreational activities such as walking, beach going, swimming, snorkelling, scuba diving, underwater photography and boating.

This is a 'no take' Aquatic Reserve, which means you are not permitted to fish by any method, harm marine animals or plants, or collect marine organisms whether dead or alive (including empty shells as they provide homes for living organisms). Please remember, you must not harm any organisms, including sea urchins, to feed the fish.

A popular recreational fishing site at the south eastern end of the car park on Shelly Beach Headland, known as Blueys, is not within the boundaries of the Aquatic Reserve but is within Shelly Beach Headland Intertidal Protected Area where you can go line fishing but collecting marine invertebrates is prohibited.

The Manly Environment Centre conducts volunteer programs for environmental education in the Reserve.

Be the eyes, ears and voice for aquatic reserves and report: 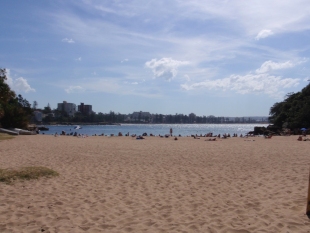 Shelly Beach is the only west facing beach on the NSW coast and this makes it a great spot to watch the sun set after a day of swimming, snorkelling or scuba diving. Photo: Renata Pronk. 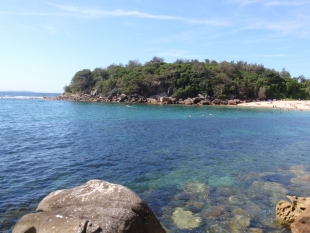 Just off Shelly Beach Headland on the northern side of Shelly Beach is the famous surf break known as the Bower. The Aquatic Reserve also covers part of the Manly National and World Surfing Reserve. Photo: Renata Pronk. Extensive rocky shore and shallow rocky reefs exist along the southern side of the Aquatic Reserve, providing great habitat for a range of marine plants and animals. Photo: Renata Pronk. 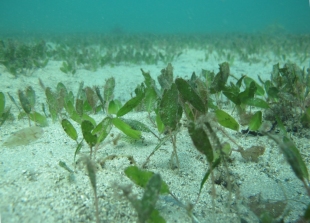 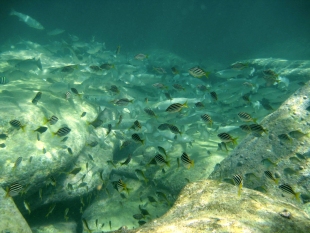 Schools of fish can be seen sheltering amongst boulders in the Aquatic Reserve. Photo: Renata Pronk. 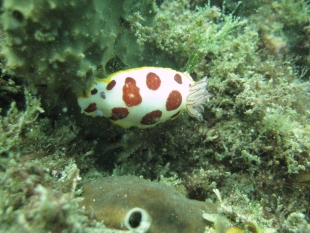 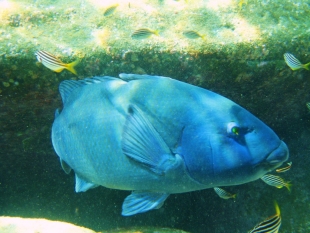 Blue groper (Achoerodus viridis) are common in the Aquatic Reserve and can mostly be seen along the rocky reef on the southern side of the Reserve between Fairy Bower Beach and Manly Beach. Photo: Renata Pronk. Tropical fish species such as moorish idol (Zanclus cornutus) can be seen in the Aquatic Reserve in the warmer spring and summer months. They have travelled down the NSW coast as larvae in the East Australian Current (EAC). Photo: Renata Pronk.

You can get to the Reserve from the southern end of Manly Beach along the scenic walkway. Fairy Bower can also be accessed from Bower Lane and Shelly Beach from Bower Street.

Please contact staff at the Marine Environment Program at marine.environment@dpi.nsw.gov.au.