Hammerhead Sharks in NSW – a guide for fishers 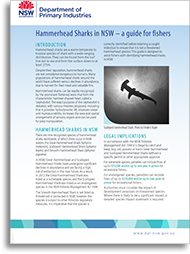 Hammerhead sharks are a warm-temperate to tropical species of shark with a wide ranging distribution. They can be found from the surf line out to sea and from the surface down to at least 275m.

Hammerhead sharks can be readily recognised by the prominent flattened keels that form the characteristic hammer-shaped head, called a 'cephalofoil'.

The exact purpose of the cephalofoil is debated, with various theories proposed, including that it provides hydrodynamic lift, improves vision and manoeuvrability, increases the area and spatial arrangement of sensory organs and can be used for prey manipulation.