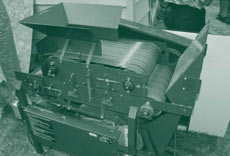 If it is decided to clean the harvested material down to dispersal units or caryopses, then a number of machines are available.

Straw should be removed by scalping or sieving before seeds are treated with peg-drum threshers or hammer mills to dress the seeds down to the caryopses, or it will be broken into fragments and prove difficult to remove later. There is a risk of damaging the caryopses with this type of equipment and seed must be examined closely under a microscope following treatment to detect damage to the embryos. Germination tests before and after treatment give a better indication of damage. The caryopses (Caryopsis - The indehiscent fruit of most grasses with a single seed, the testa (seed coat) of which is fused with the pericarp (outer wall)) are readily separated from the trash after treatment by sieving and aspiration.

For chaffy seeds, hammer mills should be run at less than half the normal grinding speed. Even so, seed with the embryo projecting beyond the endosperm (e.g. M. stipoides) will be damaged even with gentle hammer milling. 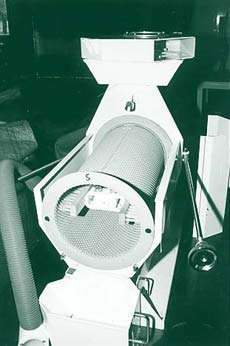 Picture 11. Northrup brush thresher for dressing chaffy seeds. The seed is brushed through the screen with a rotating brush. The speed of the brush, the clearance between the brush and screen and the size of the screen can all be varied depending on the seed being treated. (Photograph R. Whalley)

Machines using the principle of rubbing seed between two surfaces include resilient cone threshers, belt threshers, and various types of brush scarifiers and dehuskers. Cone threshers consist of a cone coated with a resilient plastic material rotating inside a matching surface coated with the same material. The rubbing action removes the ancillary structures and usually does not damage the caryopses, unless they are particularly fragile. Belt threshers consist of two face-to-face endless belts operating at different speeds in the same direction (Picture 10).

They can operate in either a vertical or horizontal plane. There is some evidence that they are not as effective as cone threshers for dressing chaffy seeds.

Various types of brush threshers (Picture 11) are effective for processing chaffy seeds but, again, fragile seeds or seeds with very soft, projecting embryos (e.g. M. stipoides) will be damaged by this equipment.

De-bearding or de-awning equipment often gently mixes the dried material in a rotating drum breaking off the awns (Awn - an elongated bristle-like appendage attached to the apex, back or base of the glume, lemma or palea) and other appendages. John Betts and Tony Wilson of Yass, NSW, have designed and built stirring equipment for threshing and separating fertile spikelets (Spikelet - consists of one or more florets and is the basic unit of the inflorescence in grasses) of T. triandra from harvested inflorescences (Inflorescence - a group of flowers borne on a stem). The harvested material is passed repeatedly through a stirring chamber and the fertile spikelets are separated from the light trash by blowing. From the air stream, the (heavier) fertile spikelets will bounce further from an angled steel plate than empty spikelets. The fertile spikelets are then separated from similarly weighted pieces of stalk and trash on an inclined bouncing fabric-covered board (Picture 12). The callus hairs of the spikelets make them stick to the fabric whereas the stalk and trash bounce off.

Dropping the dispersal units through a naked flame in order to burn off appendages has been tried with seeds of a number of different species, with limited success. The technique may be more successful with refinement. 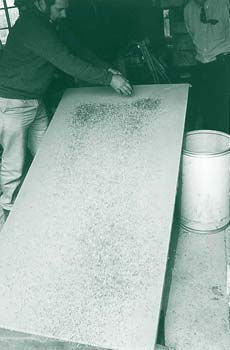 Picture 12. Device for separating de-awned fertile spikelets of T. trianda from stalk fragment and other trash. The angled, fabric board bounces up and down and the spikelets are held on to it by their callus hairs whereas the other fragments bounce down the board. Designed and constructed by John Betts and Tony Wilson of Yass, NSW. (Photograph R. Whalley)

The Woodward Air-Seed Shucker is available in both laboratory and commercial versions and works on an entirely different principle from the previously mentioned treatments. The seed and trash are first delivered uniformly onto an inclined scalping screen to remove the stems and leaves and other material that might clog up the aerodynamic parts of the equipment.

The material that passes through the scalper is delivered into an air jet that accelerates the material into a discrimination chamber. Heavier dispersal units have more inertia than light particles and the chaffy appendages and awns are removed. If the force is high enough, even the lemma (Lemma - The outer bracts at the base of a grass spikelet; usually two glumes are present) and palea tightly surrounding the caryopses can be removed, although significant physical damage may result. The heavier seeds travel further through the discrimination chamber before settling out and so the seed sample can be separated into different quality classes based on seed weight.

Coating or pelleting seeds with inert materials to increase the mass and 'flowability' is an option that has not been systematically explored with many native Australian grasses. Coating of introduced grass and legume seeds is a well established practice. Nutrients, ant repellents and, for legumes, Rhizobium inoculant have commonly been incorporated in these coatings. Many native Australian grasses are well adapted to soils of relatively low fertility and the placement of nutrients in contact with seeds could well have harmful effects on germination and seedling establishment. On the other hand, the use of inert materials or water absorbing polymers simply to increase the mass and 'flowability' of the dispersal units is an approach that has not been adequately tested. Unfortunately, much of the information concerning seed coatings and the materials involved, is confidential commercial information and not readily available.