Domestication of native grasses is a relatively new idea for the improvement of Australian grasslands. Although there are over 750 native grasses from about 180 different genera in Australia, not all have desirable characteristics or will be suitable for domestication. While the domestication of native ecotypes is new in Australia, it is common in the US where approximately 50% of forage plants seeded into range and perennial pastures are native in origin.

During the 1980s there was a resurgence of interest by farmers in native   grasses for several reasons:

This increased interest has occurred at the same time as environmental issues and the conservation ethic are being widely promoted and discussed in the community. With more emphasis on sustainable agricultural practices, there is a growing demand for pasture species that are persistent and well adapted and which provide adequate ground cover, features with which many Australian native grasses are well endowed. They have evolved and persisted under harsh conditions of periodic drought and low soil fertility and withstood over 200 years of grazing by domestic livestock.

The potential of native grasses is increasingly recognised by non-agriculturalists for: 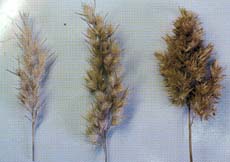 Wallaby grass (Austrodanthonia spp., formerly Danthonia) was prized by graziers at the turn of the century when it was thought to have good commercial potential, but interest was superseded by superphosphate application and imported pasture species. Wallaby grasses grow well under heavy grazing and while they respond to increased fertility they do not need fertiliser application for persistence. They are also winter green, providing valuable forage in winter and early spring when low availability restricts stocking rates in many native pastures. Comparative tests indicate that wallaby grass is only slightly lower in dry matter production and quality than other introduced grasses.

Seed-shattering and low seed production are major barriers to domesticating a native grass. Lack of seed retention is common in many species and initial improvements in seed production have been made by selecting types that have a seedhead architecture that allows seed to be retained.

Seedheads of wallaby grass - seed retention and production are improved by selecting types with compact seedheads.

In 1985, NSW Agriculture started a program to domesticate Austrodanthonia spp. (wallaby grass, white top) that occur naturally over wide areas of temperate south-eastern Australia. Over 2000 individual plants were collected throughout the Tablelands, Slopes and Plains of NSW.  Plants were sown in nursery plots at   Tamworth (pictured right) 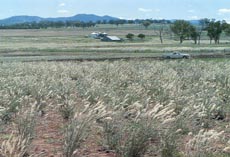 and assessed over four generations for high seed retention and green leaf production. From these plants, 9 Austrodanthonia bipartitaand 144 Austrodanthonia richardsoniielite selections were identified.

Further evaluation resulted in the registration of two cultivars under Plant Breeders Rights in 1992 and their entry into the Register of Australian Herbage Plants in 1993:

The Austrodanthonia domestication program aimed not only to produce Taranna and Bunderra as cultivars, but also to undertake support research to provide information on key areas for their successful sowing, establishment and   management.

Several other research programs are under way to domesticate species of native Australian grasses. The species of most interest are:

Pictured right is a comparison of Taranna (left) and Hume (right) wallaby grass. In well-spaced rows with adequate moisture, Bunderra grows to a height of about 120 cm, while Taranna is slightly shorter. Mature plants may develop tussocks with bases up to 30 cm in diameter.

Sowing wintergreen native grasses such as Taranna and Bunderra can markedly improve the composition of many native pastures so that productive, year-long green wallaby grasses can dominate where unproductive, frost-susceptible, summer-growing native grasses were once common.

Both species from which Taranna and Bunderra were selected occur naturally from central Queensland, throughout the Slopes, Plains and Tablelands of NSW, in many areas of Victoria and Tasmania, and in the south-east of South Australia.

Taranna and Bunderra can be grown over a wide range of rainfall zones, from 400 mm to 800 mm, on medium to heavy textured soils. Bunderra is best suited to heavy soils while Taranna is best adapted to medium and heavy   textured soils. Taranna can establish on sandy soils but it may perform poorly.

Comparative tests have shown that both Taranna and Bunderra will tolerate acid soil. Taranna has about the same salt tolerance as perennial ryegrass, and is more tolerant than Bunderra. Both of these wallaby grasses may therefore have a role in acid soil areas and degraded recharge areas.

Plants sown in autumn have a larger root system and will withstand the dry periods of the next summer better than plants sown in spring. Warm soil and adequate moisture allow seeds to germinate within a week of sowing. Seedlings should be obvious within 2 weeks.

Taranna seeds are one-quarter the size of phalaris seeds, while those of Bunderra are one-fifth the size. After removal of the fluffy floret, naked caryopses (seeds) can be sown into prepared seedbeds, direct drilled or aerially sown. When aerially sown, seeds should be lime pelleted to neutralise the acidic effects of superphosphate. When direct drilling, ensure that the seed delivery tube is behind the tine or disc to prevent seed burial.

It is most important that both Taranna and Bunderra are sown at or very near the soil surface. Sowing even as shallow as 10 mm can reduce emergence by up to 50%. Seed will also need to be treated with a registered insecticide to prevent seed theft by ants.

Sowing rates for pasture are 1–2 kg/ha. For grazing stands, densities of 20–40 plants per square metre provide good ground cover. Lower sowing rates (as low as 0.5 kg/ha) may be used, provided the paddock is locked up at the flowering and seedling regeneration stages to enhance establishment.  Plants sown in May will produce seed the following spring. Thin stands can readily thicken up if seedlings are encouraged to establish by reducing grazing   and weed competition.

Taranna and Bunderra will establish best when sown without a companion legume to compete with. Sowing these grasses on their own also makes herbicide selection for broadleaf weed control easier and less costly. If   required, legumes can be easily sown into established wallaby grass pastures.

If sowing with a legume, wallaby grass establishment can be greatly improved by sowing the grass and legume in separate rows, as pictured right. Fertiliser may be banded with legume seed.

Application of fertiliser at sowing is not essential for wallaby grass since it is tolerant of poor soil fertility and has a competitive advantage over some weeds - the addition of fertiliser will often boost only weed growth.

Ideally the ground should not have a history of annual grass weeds. If it does, these weeds should be controlled in the crops that are sown a year or two before the establishment of wallaby grass. Mouldboard ploughing (on suitable soils) and spray topping are other methods that may be incorporated into a clean-up program prior to establishment.

Grass weed management in young wallaby grass stands is extremely difficult because tests so far have not found a herbicide which is safe to the crop. Therefore it is essential that care be exercised in selecting suitable ground and preparing the seedbed.

If a serious weed problem occurs in the first year it may be best to delay chemical weed control until the following year. Weed control in second-year crops is much easier, since mature plants have a greater   tolerance to herbicides. However, slashing first-year crops badly infested with annual and perennial grasses may be beneficial. Taranna and Bunderra plants sown in rows rather than swards will have a better chance of withstanding competition   from annual grasses

Weed control in the early seedling stage is very important for establishing a persistent stand with adequate plant numbers. As a small seedling, Austrodanthonia has trouble competing with aggressive seedlings of other grasses and broadleaf weeds.

There are no herbicides recommended for use prior to sowing Austrodanthonia.

Following sowing there are no herbicides that can be recommended to remove grass weeds without damaging Austrodanthonia, although several broadleaf control herbicides can be safely used on seedlings at registered rates.

A range of herbicides used for control of broadleaf weeds can be safely applied to established Austrodanthonia swards without greatly damaging plants. Established pastures are more tolerant of paraquat/diquat mixtures than they are of glyphosate. Consult your agronomist or consultant for further information on herbicides. Research results on herbicide use can be found under ‘Further reading’.

Burning or heavy grazing to remove dead stems does not harm plants or affect subsequent seeding. Burning may also have the added advantage of increasing the germination of wallaby grass seedlings.

To date, no major insect pests or diseases have been found which specifically affect sown stands of wallaby grass. Similarly, there are no known animal health problems (e.g. toxins or alkaloids) associated with these grasses.

Newly established stands should be allowed to seed before being grazed. Grazing at lower than normal rates with cattle in the first year will increase stand persistence. In comparative grazing studies, wallaby grasses set stocked at 10 dse/ha (dry sheep equivalents per hectare) have been the only perennial grasses to successfully recruit new plants from seedlings.

Stocking rates of 8–15 dse/ha have been reported in higher-rainfall environments from well-managed pastures consisting primarily of wallaby grass and a companion legume, such as white or subterranean clover.

Seed production from Taranna and Bunderra is a specialised enterprise, requiring:

For seed certification purposes, seed production stands of Taranna or Bunderra should be no closer than 50 m to natural or other commercial stands of wallaby grass.

Various methods of harvesting wallaby grass seed have been   investigated, including brush harvesting, direct heading and windrowing. Harvesting removes the floret from the seedhead and the straw. Further processing is required for clean seed.

The Native Vegetation Act 2003 (www.legislation.nsw.gov.au) may regulate some pasture improvement practices where existing pasture contains   native species. The released cultivars, when sown and while they remain dominant in the pasture, are exempt under the Act in respect of them being regarded as a native species subject to clearing restrictions (i.e. they can be removed from pasture as can exotic pasture species).

Pasture improvement may be associated with an increase in the incidence of certain livestock health disorders. Livestock and production losses from some disorders are possible. Management may need to be modified to minimise risk. Consult your veterinarian or adviser when planning pasture improvement.

Users of agricultural (or veterinary) chemical products must always read the label and any Permit before using the product, and strictly comply with the directions on the label and the conditions of any Permit. Users are not absolved from compliance with the directions on the label or the conditions of the Permit by reason of any statement made or omitted to be made in this publication.

The information contained in this Agfact arose from a program for the domestication of Wallaby grass, jointly funded by the International Wool Secretariat and NSW Agriculture. Brian Roworth (Technical Assistant, NSW Agriculture) and Andrew Schipp (District Agronomist, NSW Agriculture) provided invaluable assistance, dedication and expertise to the project.