The goat, Capra hircus was one of the first animals to be domesticated, eight to ten thousand years ago. The origins of the wild goats, Capra aegagrus extend around the dry hills of the Mediterranean basin, including Turkey, Iran and Pakistan.

Goats arrived in Australia with the First Fleet in 1788. They were a convenient livestock animal for early European settlers, being relatively small, eating a wide range of plants and providing both meat and milk. The present feral goat populations are descendants from animals introduced for a variety of reasons since 1788. During the 19th Century, sailors released many goats onto islands and the mainland for emergency food supplies.

Cashmere and Angora goats were imported in an attempt to start a fibre industry in Australia. Goats were spread around Australia by settlers, railway construction gangs and miners who used these domesticated animals as a source of milk and meat. These domestic goats escaped, were abandoned or were deliberately released and established feral herds.

Feral goats are found in many areas of NSW, including arid and semi-arid rangelands, as well as higher rainfall and agricultural areas of eastern NSW. They have benefited from sheep grazing practices and the provision of artificial water points throughout the dryer regions of NSW.

Feral goats are widely distributed through the western division, locally abundant in the northern and central slopes and scattered throughout the tablelands and coastal regions of NSW.

Feral goats are most common on rocky or hilly country in the semi-arid rangelands. These areas provide security from predators and disturbance by humans. Goats are not normally found on flat treeless plains, but can be found on flat country with dense shrub cover.

Favourable habitat requires availability of shelter, surface water and an abundance of preferred food species. Large numbers of goats do not occur in areas where dingoes are abundant.

Goats are generalist herbivores that select the highest quality food available. They eat foliage, twigs, bark, flowers, fruit and roots. They will also eat plant litter, seeds and fungi. Goats can eat the majority of plants in the pastoral zone of Australia, including prickly acacia, many poisonous or bitter plants and species avoided by sheep and cattle.

Though goats will eat just about anything, they are highly selective feeders and specific shrubs, grasses or herbs may comprise the principal part of the goats diet at different times or at different locations.

During dry times goats need to drink water. An average-sized goat will drink between 2 and 4.5 L of water per day, depending upon temperatures, humidity and reproductive status. Some goats, particularly those in temperate or wet climates, can obtain most of their water requirements from their food and can survive in areas with no permanent fresh water.

Conception occurs in feral goats in pastoral areas of NSW in all months of the year, but the peak rate occurs from late summer to mid winter. This coincides with the optimum conditions for survival of the mother and young. Breeding rates are influenced by rainfall and, in semi-arid areas, most kids are produced in the cooler times of the year. In the temperate region, kids are born throughout the year.

In drier districts, all sexually mature females in a herd may come into oestrus at the same time and it is thought that this is synchronised by male sexual activity. This can reduce the effects of predation by having a glut of potential victims in the form of young kids all of the same age.

Females can begin breeding at 6 months of age or when they weigh over 15 kg. Males reach sexual maturity at approximately 8 months, but competition for access to oestrus females is fierce and it is unlikely that young males are able to mate until they become large, dominant individuals.

Females may become pregnant in their first year and can become pregnant again soon after giving birth, as lactation does not stop oestrus or pregnancy. Therefore, they can breed twice in a year, as their usual gestation period is only 150 days. Twins and triplets are common, although it is very rare for all three triplets to be raised to independence. At any time in the high rainfall zone, between 16 and 53% of females have kids at foot. The average litter size is 1.3 kids per female.

Females that are about to give birth leave the group and give birth in a protected spot. Kids are fully active soon after birth, but most, although not all, are hidden by their mothers and visited only for feeding. A few days after birth they join the mother on her travels. Females may then remain separate from herds containing adult males for 1 to 2 months.

The mortality rate of kids from birth to 6 months is high. Natural mortality rates amongst older goats are unknown but assumed to be about 10%. Adult mortality rates, from all causes including hunting and harvesting are about 26% in temperate regions.

Goat populations can rapidly replenish after vigorous control programs. High levels of removal of feral goats from a population may increase survival rates and result in a faster than normal rate of increase. Goats have the potential to double their population every 1.6 years in the absence of mortality caused by human control efforts and predation.

Feral goats are social animals and are found in herds, the basic social unit being adult females and their recent offspring. The males leave these matriarchal groups to form loose associations with similar aged males or larger mixed-aged groups, which associate with the female's home range during the breeding season but range over larger areas at other times.

Group size within herds of feral goats varies on both a daily and seasonal basis. Much of the seasonal variation seems to be related to the availability of surface water. When water is abundant, groups are generally small and well dispersed. During drier months, groups come together and increase in size, consisting of both males and females of all age classes.

During droughts they tend to congregate in large numbers, 500 to 800 goats and remain near water.

A good knowledge of the home range of feral goats is a prerequisite to both the effective management of this animal as a resource and the establishment of appropriate strategies for control.

The size of the home ranges of feral goats vary across Australia, being smaller in areas where food, water and shelter are freely available and much larger in semi-arid pastoral regions. The boundaries of these areas are not rigidly defined and are not actively defended to exclude other goats.

Feral goats in higher rainfall areas with ample water and food have small, non-exclusive home ranges generally of about 1.0 to 13.5 km2, with males having larger ranges than females. In pastoral regions goat movements are generally much larger, with non-exclusive home ranges. These are usually centred close to, or around, permanent water. Radio tracking of goats on Yerilla Station, in the pastoral area of Western Australia showed the average female home range was 50 km2 ranging from 14 to 118 km2. Males averaged 271 km2, ranging from 102 to 460 km2. Data recorded from the Broken Hill region also confirm similar large home ranges.

Long distance movements of goats have been recorded in semi-arid regions. One male in western NSW moved 87 km in a 10-month period. This degree of mobility makes goat control very difficult, as the rate of reinfestation can be very high. It also makes eradication or containment almost impossible in the event of an exotic disease outbreak. However, feral goats in higher rainfall zones are more sedentary, with few goats moving permanently outside their home range.

Feral goats may compete with both native animals and domestic livestock for food, water and shelter. During droughts, or if feral goat numbers have not been taken into consideration in terms of total grazing pressure, goats can have a major impact on native vegetation. Goats have very destructive grazing habits, as they can completely strip shrubs of bark and leaves. Goats can destroy the vegetation cover, disturb the balance of species in a vegetation community and spread weeds.

Overgrazing and movements of goats can lead to soil erosion. Disturbance of the soil by the sharp hooves of goats and the characteristic pawing of the ground by males leaves the soil open to the erosive forces of the rain and wind. Goats may compete with native animals for shelter; without protection these animals can be exposed to the heat and become easy prey for foxes and wedge-tailed eagles.

Feral goats can carry internal and external parasites, some of which affect sheep and cattle. Feral goats can carry and spread ovine footrot and could also act as a reservoir for, and be a vector of, exotic diseases, including foot and mouth, rabies, bluetongue and rindepest. This makes them a cause for concern to animal health authorities because of the role they may play if an exotic disease outbreak should occur.

Other impacts may include damage to infrastructure, such as fences, damage to heritage sites and economic losses associated with controlling feral goats.

Competition and habitat degradation by feral goats are listed as a Key Threatening Process (KTP) under the Threatened Special Conservation Act 1995. 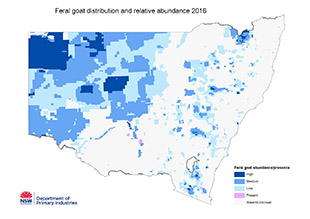 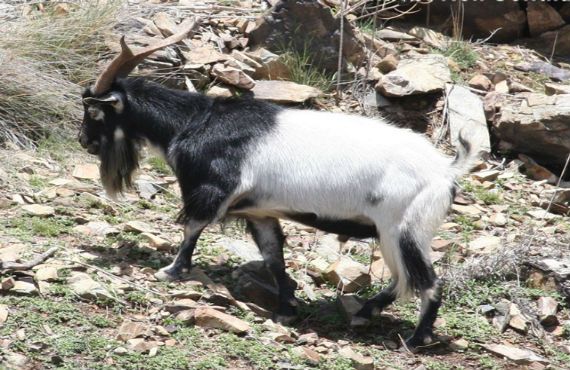