The feral pig in Australia is a descendant of various breeds of Sus scrofa, the domestic pig. In the north of Australia there is some indication that a number of other species of pigs were also brought to Australia, including Sus celebensis and Sus papuensis.

Records indicate the presence of domestic pigs immediately following the arrival of the First Fleet. Pigs were kept by settlements unrestrained and in semi-feral conditions. Stock could readily escape and wander, and by the 1880s pigs had run wild in NSW.

Feral pigs are widely distributed in NSW, Queensland, the Northern Territory and the Australian Capital Territory. Isolated populations also occur in Victoria and Western Australia, on Flinders Island in Bass Strait and on Kangaroo Island in South Australia. Tasmania occasionally has temporary populations due to accidental releases.

In NSW, feral pig populations are found primarily in western areas, their distribution closely related to the location of inland watercourses and flood plains. Increasingly, populations are appearing in the tablelands and coastal areas of eastern NSW, probably due to the deliberate release of animals.

Feral pigs need to live in moist areas that can provide adequate food and water and enough shelter to protect against extremes of temperature. In particular, dense shelter is required for protection against high temperature.

In Australia, feral pigs are found in a variety of habitats that can provide these requirements; these areas include rainforests, monsoon forest patches, paperbark swamps, open floodplains, marsh areas, semi-arid floodplains, dry woodlands and subalpine grasslands and forests.

Weather conditions and food availability affect the movement of feral pigs. In hot weather days may be spent in one area and nights spent feeding in another. In many habitats there is a seasonal trend of movement between specific areas, depending on the current food supply. Feral pigs will readily swap between food sources so that excessive movement is not required. Even if disturbed, feral pigs will not move far and will readily return to their home ranges.

Feral pigs restrict their activity to cooler parts of the day. In hot weather they are primarily nocturnal. Even in cooler weather they tend not to be active during the middle of the day.

Feral pigs consistently use trails from one area of use to another, such as from shelter to food supply or water. They also use sheep and cattle pads to and from water. Marking of these trails is common, with trees or logs rubbed or tusked. Rubbing also helps to reduce ectoparasite infection, as does wallowing in mud or dusty depressions. Mud and dust also help to regulate body temperature.

Sows and piglets generally run together as a group. Immature males and females may also stay with the group until they reach maturity, or they may run as a juvenile group until they mate. At about 18 months males become more solitary rejoining a group only for mating or to feed on localised food sources.

Group sizes vary depending on the season and habitat. In forested areas of south-west WA group sizes rarely exceed 12, whereas in more open country up to 40 or 50 pigs may form a mob. In times of severe food and water shortage large groups of 100 or more may gather around remaining waterholes.

Feral pigs are opportunistic omnivores. They prefer succulent green vegetation, fruit, grain, and a wide variety of animal material such as frogs, fish, reptiles, birds, small mammals and carrion. They will also eat underground plant material such as roots, bulbs, corms and fungi. The requirement for protein and energy is high, particularly for breeding, successful lactation and growth of young.

Feral pigs are polyoestrous, being able to breed throughout the year. Breeding success depends on the availability of nutrients, in particular energy and protein. Successful mating normally coincides with the seasonal abundance of food in different habitats.

Female feral pigs reach sexual maturity once they reach a weight of 25 to 30 kg, which normally occurs between 7 and 12 months. Males become sexually mature around 18 months. The gestation period is 112 to 114 days and an average litter size is 5 or 6 piglets.

A litter is weaned after 2 or 3 months and mating can occur again around the same time. Under favourable conditions two litters can be weaned in a period of 12 months. This breeding capacity allows feral pigs to quickly recover from a population setback, and to rapidly increase their populations in periods of favourable conditions.

Mortality of feral pigs in their first year of life, particularly from the foetal stage to weaning, is high, varying from 10% to 100%, depending on conditions. Mortality is due to factors such as loss of foetuses, adverse weather conditions, accidental suffocation by sows, loss of contact, predation from wild dogs and starvation.

Starvation can affect pigs of all ages: lactation of sows can cease if protein levels are not adequate and excessive tooth wear in older pigs can interfere with eating. Lack of appropriate nutrients also leaves feral pigs more susceptible to parasites and diseases.

Adult mortality may vary from 15% to 50%, with few feral pigs in the Western Division of NSW living more than 5 years.

Feral pigs can be hosts or vectors of a number of endemic parasites and diseases, some of which can affect other animals or people. Livestock health can be significantly affected by:

A number of worm species also carried by feral pigs can affect livestock.

Human health can be affected by:

Feral pigs are declared pest animals under the Local Land Services Act 2013. This declaration means that feral pigs are to be continually suppressed and destroyed by land managers. It is illegal to keep or transport live feral pigs. The definition of feral pigs includes pigs born in the wild, pigs that have lived in the wild, pigs that demonstrate wild and erratic behaviour, pigs that are not domesticated and pigs that have some or all of the following morphological features; long coarse hair, elongated snout, sloping hindquarters.

Feral pigs prey on newborn lambs. They also reduce yields in grain, sugarcane, fruit and vegetable crops through consuming or trampling plants. Fences and water sources can be damaged and dams and waterholes fouled through wallowing and defecation. Feral pigs also compete with livestock for pasture and damage pasture through up-rooting vegetation.

Feral pigs disturb natural environments through rooting up soils, grasslands and forest litter and consuming a range of native plants. There is some evidence that they may also help spread the rootrot fungus that is responsible for dieback disease in native vegetation. Feral pigs also eat a range of live native animals including, earthworms, beetles, centipedes, amphipods, snails, frogs, lizards, snakes, turtles and their eggs and small ground-nesting birds and their eggs.

Feral pigs are listed as a Key Threatening Process due to predation, habitat, degradation, competition and disease transmission.

Direct observation: This is the least reliable method to detect the presence of feral pigs. Pigs can be detected directly by using dogs, by spotlight observation at night, tracking collared pigs and by aerial survey.

During daylight, feral pigs shelter in deep cover and are rarely seen. The presence and number of pigs are more reliably evaluated by observing signs of their activity and impact. An experienced observer can rapidly estimate the presence and abundance of feral pigs by carefully examining these signs. However, a beginner may see nothing.

Lamb predation: Persistent low marking percentages that are otherwise unexplained may be caused by feral pigs. Pigs prey on lambs at dawn, dusk and during the night, leaving very little of the carcass, which can be easily missed. Often little or no sign of lamb carcasses may also indicate pig problems. Significant lamb mortality can result from predation by a small number of adult feral pigs.

Rooting: Feral pigs use their snouts and teeth to dig for underground food, including small animals and tubers, particularly where soil is soft or after rain. The result varies from selective uprooting of specific types of plants to the creation of extensive areas resembling ploughed paddocks. The distribution of rooting areas is a reliable guide to the location of pigs at night.

Crop damage: Feral pigs damage crops by eating them, by trampling and bedding in them, and by uprooting seed and seedlings. Their rooting is distinctive, but their trampling, pads/paths and bedding may also resemble damage caused by kangaroos.

Fence damage: Pigs will push through fences, usually next to a post or picket and these holes are then used by other animals. Mud or coarse bristly hair on the wire or post indicates feral pigs.

Pads: Pigs often create pads when travelling in single file to frequently used food and water sources. Pads are an unreliable sign of feral pigs unless there are no other animals about, or there are more signs of feral pigs, such as tracks or faeces, because feral pigs, domesticated animals and other wildlife all use the same pads.

Tracks: Feral pigs leave hoof-prints in any soft surface. Their tracks have a distinctive shape but can be easily confused with sheep tracks if the outline is blurred.

Faeces: Pigs defecate on and off pads. The size, shape and consistency of the scat varies with age and diet, but it is typically 3 to 6 cm wide, 7 to 22 cm long and fairly well formed. Close examination will reveal finely chewed plant matter and occasional bone fragments, pig bristles, wool and kangaroo or wallaby hair.

Wallows: Throughout the summer pigs wallow by lying in moist or wet areas, often near permanent water. Wallowing may help to control the animal's temperature and protect it against insects. Wallows are distinctive oval depressions in mud and can show how recently pigs have been in the area.

Mud-rubs: After wallowing, pigs often rub their heads, shoulders and sides on nearby vertical objects such as tree trunks and fence posts. The result is a distinctive muddy rub site at pig height.

Tusk-marks: Adult boars slash the trunks of growing trees with their tusks, leaving a distinctive pattern of cut-marks. The trees selected for cutting and rubbing are often next to pads and near water. Because boars stand on tip-toes and reach up when tusk-marking, the height of the mark is a guide to the size of the carver. Marking may serve to notify other boars of the marker's presence and size.

Nests: Just before farrowing, sows make nests from the available vegetation, which they uproot and carry by mouth. If long, grassy vegetation is plentiful, the nest can be very large - up to 3 m by 1.5 m and 1 m high, with a domed roof. For the first 1 to 5 days of life, the piglets stay in the nest and the sow is usually also inside or nearby. Nests are usually less than 2 km from permanent water. They should be approached with caution. 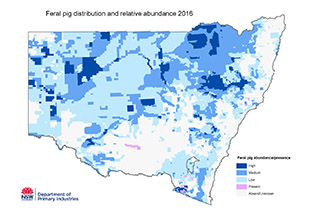 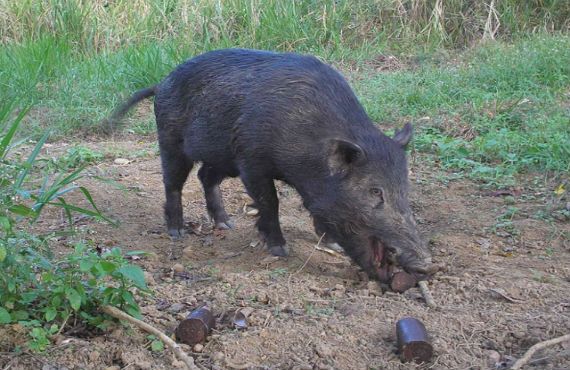 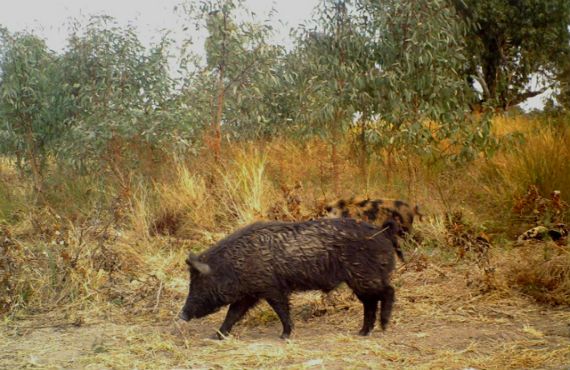 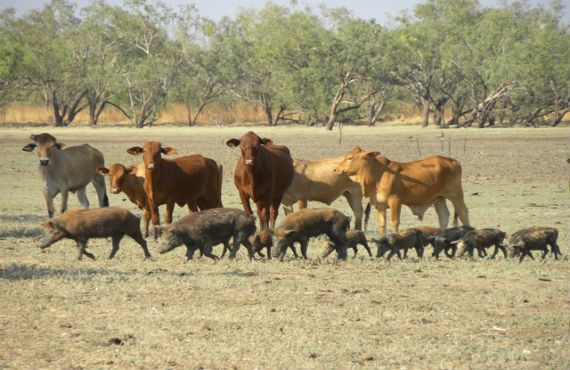 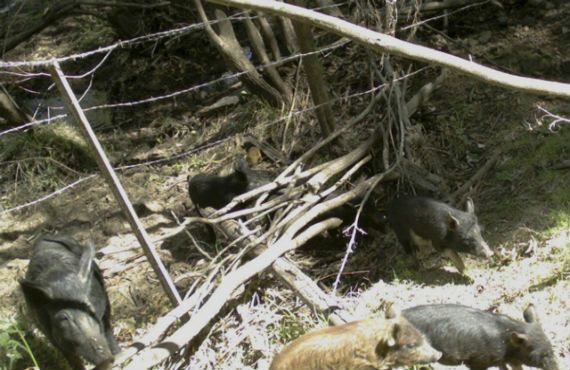 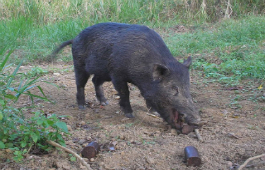