Urban foxes have become common in many cities around the world.

It is believed that encroachment of residential areas into green-belts has left many islands of agricultural land, which still managed to support small numbers of foxes. As these remaining agricultural lands themselves became developed, foxes were isolated and forced to survive exclusively in the urban landscape. Foxes are certainly now becoming a more common pest animal in Australia's major cities.

Urban environments are highly productive for foxes and can support population densities up to 10 times greater than in rural areas.

Although primarily carnivores, foxes can survive on a variety of food sources. In urban environments their diet can consist of over 50% scavenged food scraps and left over pet food.

Foxes breed once per year in spring and usually produce four cubs. Breeding earths or dens are often found under buildings, in parklands, cemeteries and in quiet back gardens.

Foxes can cause a variety of problems in urban environments. They will certainly kill lambs and kid goats and many native species as they do in rural areas. They will also kill small domestic pets and livestock such as rabbits, guinea pigs, poultry and aviary birds.

Fox attacks are often devastating with many animals killed and left uneaten. This is called surplus killing, which is a common trait in many carnivores. Foxes will rarely attack or even interact with domestic cats and dogs. Foxes are also known to turn over garbage bins, dig holes in lawns and disturb the peace through their own vocalisations and by making dogs bark.

A more immediate problem (at least in south-eastern Australia) is that of hydatids and the fact that even at a low incidence of infection, foxes are a risk to human health.

Control of urban foxes is made complex by their interactions and proximity with humans. Foxes are extremely cunning and difficult to trap. They can be fumigated in active dens if they can be located. Guard animals such as maremma sheepdogs and alpacas can be used to protect sheep and goats.

In rural areas, foxes are commonly poisoned however, in most urban environments this would be considered impractical due to the risks posed, particularly to domestic dogs. The best strategy is to take measures to reduce their ability to attack livestock and pets. This can include housing animals at night in fox proof enclosures. Foxes are excellent climbers and diggers.

Enclosures should ideally have a roof or the fence should be at least 2 m high with an overhang of 30 cm. Also protect the floor of the enclosure with mesh or alternatively bury mesh in the ground and outwards from the enclosure. Do not feed foxes, intentionally or otherwise, as this will encourage them to continually visit. Uneaten pet food should be removed and domestic food scraps placed in compost bins or similar. Any other potential food sources for foxes should be properly disposed of to discourage their presence in urban areas, particularly around valued pets. 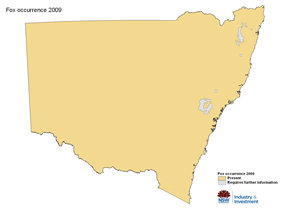