The house sparrow (Passer domesticus) also known as English or Eurasian sparrow is a small (14–16 centimetres head to tail) bird is sexually dimorphic. Males have a grey crown, a chestnut back and neck and chestnut wings with black tips, white cheeks, and a grey rump and tail. Their black bib is increasingly prominent with status, particularly during breeding. Dominant males display the largest bibs. Females are a uniform pale grey, with dark streaks on the wings. Males and females are a similar size.

Continual, jangly ‘cheerup’ and chirps when feeding or perching; a high-pitched ‘treeee’ in alarm.

Commensal with humans, sparrows inhabit most continents throughout the world. They were introduced to Australia in the 1860s by acclimatisation societies and are now abundant in cities, towns, rural areas and around farm buildings, particularly in the south-east of Australia. They are closely associated with humans and populations are known to decline in towns that have been deserted. They avoid unsettled areas and forested habitats. Their failure to colonise Western Australia may be due in part to the barrier of the Nullarbor Plain and lack of continuous human habitation. Eradication of invading house sparrows also occurs. For example, more than 70 house sparrows were destroyed at Wanneroo in 1994 and 15 were destroyed near Fremantle harbour in 2005 (Government of Western Australia). In rural areas, densities are greatest when properties are small and hence human activity more concentrated. Sparrows roost in trees with dense foliage, including introduced species such as palm trees (Phoenix spp.), and in reed beds, roof spaces, or the ivy (Hedera helix) surrounding buildings or trees. In urban areas they are more common in the centres of towns and cities rather than in suburban garden areas.

House sparrows are sedentary and no seasonal movement patterns are evident throughout their range. However, they can disperse rapidly, initially colonising parts of Australia at a rate of over 100 kilometres a year. Conversely, dispersal is limited and gradual in unsettled areas, particularly in drier regions where colonisation can occur at a rate of less than seven kilometres per year. Highly sociable and gregarious, they usually form small colonies but can also congregate in large flocks of several thousand, particularly following the breeding season. Established colonies do not usually move more than a couple of kilometres.

Sparrows feed predominately on seeds and scavenged food waste, but they will also consume flowers, buds, fruits and insects. Vegetable matter, bread, grain and grass and weed seeds, are regularly consumed. Small groups (usually less than 20) forage on the ground along walkways, near rubbish sites and in open areas. This small bird will often aggressively defend feeding locations from smaller species, but it can co-occur with starlings (Sturnus vulgaris), mynas (Acridotheres tristis) and European blackbirds (Turdus merula). Occasionally they forage in the tree foliage, where they catch flying insects and remove and peck fruit.

House sparrows build untidy grass and stick dome nests lined with feathers, mainly in gaps of buildings, often under eaves, and between and beneath roofing material. Occasionally they nest on tree branches or in tree hollows, including those of Eucalyptus spp. Two to six white to pale grey eggs with dark grey and dark brown spots are incubated for 10–14 days. Young fledge after 14–17 days. They have a long breeding season, which can extend from July to April, with peak breeding between September and February. Two or three broods are commonly raised during this season. Males often switch partners between broods but remain loyal to nest sites, which are aggressively defended from other males and smaller native species.

Sparrows are considered the most significant pest of crops in New Zealand and commonly cause damage to fruit, vegetable, grain and oilseed crops in Australia. Significant losses have been recorded in pear, apple, berry, cherry, grape , nectarine, apricot, plum, peach, and loquat orchards. Vegetables and cereals such as tomatoes, lettuce, lucerne, peas, wheat, maize, sunflower, soya bean and rice are often damaged and germinating shoots and seedlings removed.

Pecked fruit may often result in secondary losses because the exposed flesh encourages insects and fungal diseases which can spread damage throughout the crop. Considerable amounts of grain can also be lost at feedlots, piggeries and poultry farms. Aesthetic problems arise as a result of faecal deposition in roosting and nesting areas. Drains and gutters can become blocked with nesting material. Sparrows are also susceptible to a range of potential diseases, including salmonellosis, tuberculosis, and Giardia and Cryptosporidium infection. The prevalence of infection and the bird’s importance as a vector for transmission are, however, largely unknown. They are known to usurp native species from nest hollows, although normally they prefer to nest in buildings. 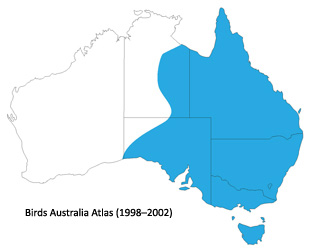 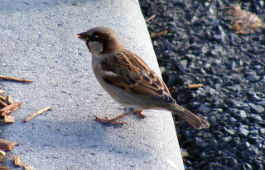