The common starling Sturnus vulgaris, also known as European or English starling, is a dark-coloured medium-sized (20 centimetres head to tail) bird, with a sharp pointed bill, relatively short tail and pointed wings. In the breeding season starlings turn a glossy black with metallic purple or green tints, slightly duller in females. The bill turns dull yellow with a blue base on males and a salmon pink base on females, and the legs of both sexes turn from a dark colour to an orangey hue. In non-breeding plumage both males and females are brown and speckled, with a dull grey bill and legs. Females have a darker inner eye ring surrounded by a lighter iris ring, whereas males do not have the light ring. Under-wing coverts are very dark or black in adult males and brown or grey in females, but this can vary among individuals. Males (73– 96 grams) generally weigh slightly more than non-gravid females (69–93 grams). Juveniles are uniform grey-brown above and lightly flecked below, with dark bills and grey eyes. They moult into non-breeding adult plumage over summer.

The call is a collection of wheezy whistles, clicks and scratching notes. Starlings also have the ability to mimic other birds.

In Western Australia the climate is suitable for range expansion, but to date, starlings have failed to colonise this suitable habitat because of the barrier offered by the Nullarbor Plain and concerted efforts to eradicate colonising populations. Recently, a population has been discovered around Esperance, and, at the time of writing, the feasibility of eradication, or at least containment, was being considered.

Following fledging, young starlings disperse in search of food and shelter. Juveniles may move great distances to feed. For example, Cabe (1999) found that the average distance moved by juveniles in the USA was 104 kilometres, although distance varied greatly among individuals. Just over half the birds returned to their birth sites to breed (Cabe 1999). One study of banded juveniles found 20% moving more than 100 kilometres from their birth sites, whereas another 20% from the same colony moved less than ten kilometres (Feare 1984).

In contrast to the migratory populations in northern Europe and North America, starlings in Australia display no large-scale seasonal movements. Australian starlings are generally sedentary, with an average movement of two kilometres recorded from banding recoveries and a maximum of 987 kilometres. Although starlings will shift regionally, movements are generally more localised than those of nomadic lorikeets and honeyeaters (Meliphagidae) which travel larger distances seeking nectar from flowering plants. However, Australian starlings commonly make small regional movements according to food availability, particularly in cultivated and cleared agricultural areas. In urban areas starlings are more sedentary, with seasonal fluctuations in abundance because of high juvenile mortality and dispersal rates.

Starlings have an extremely diverse diet that varies seasonally, geographically, and with the age of individuals. Food items range from fruits and seeds to skinks, worms and snails, with arthropods being the most numerous and diverse group of organisms eaten by starlings in Australia. However, starlings are highly adaptive and in time of food scarcity will eat almost anything, including garbage. Their diet is restricted by both the size of food items and by amounts, since the bill is more suited to probing and the gut lacks a crop that would usually facilitate gorging. Starlings need to drink water daily.

Invertebrates generally make up about half the starling’s diet and are especially important for laying mothers and their young. Olives, when present, are also a food staple for adults and young during the breeding season. Juveniles tend to eat more plant foods, most likely because of inexperience in foraging for insects.

Starlings prefer to feed in short grass, primarily in cow and sheep paddocks or on lawns. They often forage in large flocks, taking insects disturbed by grazing animals, and they also take larvae, insects and herbage directly from the ground. Starlings also probe the bark of trees for insects and ‘oxpeck’ sheep, as well as catching flying insects on the wing. Starlings may be beneficial in some agricultural areas, taking crop-damaging larvae with their probe-like bill, but this benefit has not been scientifically confirmed. Other feeding sites vary seasonally and include orchards, vineyards, cereal crops, feedlots and rubbish sites. Feeding duration in cereal and horticultural crops, where birds can rapidly eat a large quantity of food, is usually shorter than the time spent in other feeding areas. Once a feeding pattern is established, starlings will use the same sites for extended periods, but unlike other bird species they have no consistent peak feeding times.

Starlings feed in large flocks of up to 20 000; this is thought to improve their feeding efficiency and to decrease predation by birds of prey. As the breeding season approaches, feeding flocks become progressively smaller as more time is spent at feeding sites that are close to the nest.

Sexual activity and nest building peak in early spring (August–September). Starlings form pairs and nest in tree hollows, holes in the ground and gaps or crevices in cliffs, tree stumps, fence-posts and eaves and under roofs of buildings. They frequently reuse the same hollows for initiating second broods. The male builds a small cup-shaped nest within the hollow. Both inter- and intra-specific aggression is used during the breeding season to acquire and defend nest sites. Males may even kill each other in such encounters. Nest usurpation, whereby starlings aggressively take over the active nest of another species, has also been documented.

A suite of factors influences laying date, including day length, food availability, social cues and climate. In Australia, laying generally begins in August–September and continues until December–January. Incubation lasts 12 days, during which time females spend 80% of their time on the nest. Males also help in incubation for short periods. A female may have up to three broods a year, and clutch size ranges from one to seven eggs with a mean range of 3.8–4.9. Nestlings fledge at 20–23 days.

Starlings can carry many parasites and diseases, raising concern in food factories and industrial areas and are a potential risk to livestock industries. For example, they are implicated in carrying (and in some cases transmitting), salmonella, cryptococci, Newcastle disease (poultry), transmissible gastroenteritis (pigs), eastern encephalitis (horses) and foot-and mouth disease (ungulates), although the risks remain unquantified. Damage to infrastructure is commonly reported, particularly the fouling of roof cavities with faecal matter and with nesting material. Environmental impacts, particularly the usurping of nest hollows, is potentially serious for some native species, for example, Coxen’s double-eyed fig parrot (Cyclopsitta diophthalma coxeni) and the turquoise parrot (Neophema pulchella). The spread of environmental weeds such as olives by starlings is also an emerging issue. Aesthetic problems are also common because of the formation of large noisy roosts in urban areas. 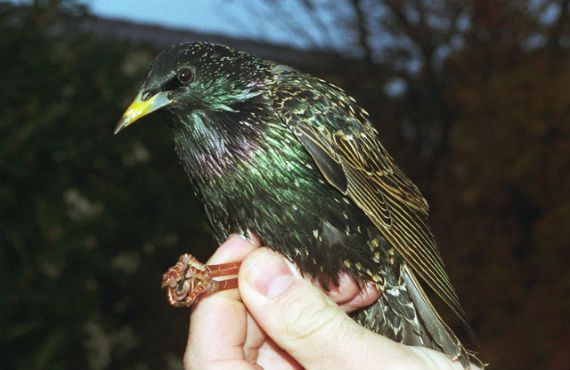 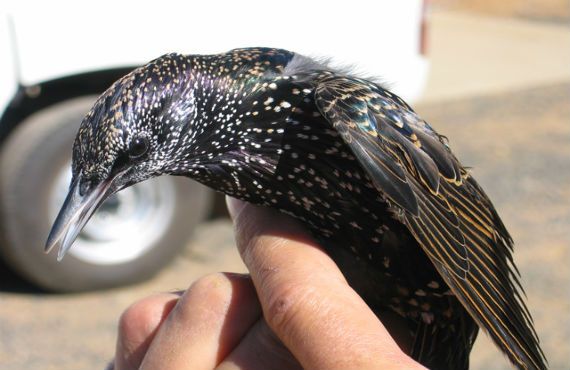 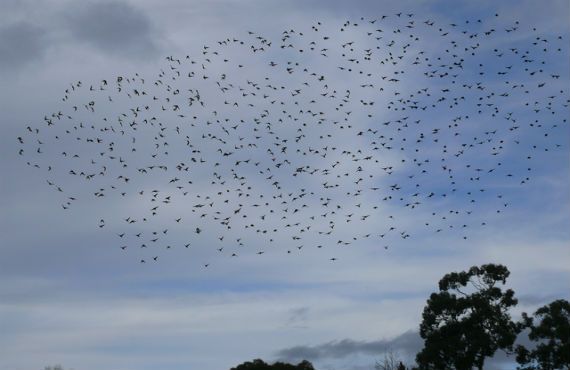 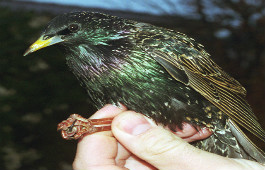