The European rabbit is declared a noxious animal in NSW. Landholders are obliged to control rabbit populations on their land. The aim of control is to reduce the impact of rabbits on farm enterprises and the natural environment. The success of rabbit control should be determined more by how many rabbits remain than by how many rabbits have been removed. Rabbits have the ability to rapidly re-invade and recolonise areas following control, so control programs should involve as large a number of properties as possible. Set clear, attainable objectives for control work, taking account of available financial and physical resources.

Where rabbit density is medium to high, the objective is to reduce the population to a manageable level - usually by a poisoning program, but only during the non-breeding season. If control must be carried out during the breeding season, use warren ripping or fumigation. Breeding may occur during most times of the year, but usually follows milder seasons when conditions are conducive to pasture growth. Initial reduction may also be achieved by the arrival (natural or introduced) of rabbit haemorrhagic disease virus (RHDV) or myxomatosis.

If rabbit density is low the objective is to reduce the population further so that it cannot recover quickly. Follow up control is usually achieved by fumigation and harbour destruction.

When this stage is fully implemented and maintained, rabbit impact should not return to its former level.

When rabbit densities are very low, advanced control methods such as shooting, trapping, fumigation and harbour destruction make use of previous control inputs to keep rabbit numbers low in the longer term. Regular use of advanced control and monitoring, as part of overall property management, should avoid the need to repeat stages 1 and 2.

Poisoning is most effective during the non breeding season (when rabbits are less territorial and less tied to warrens) and feed is scarce. The best time is usually during mid to late summer.

1080 and Pindone are toxins registered for the control of rabbits. Both are covered by product labels and Pest Control Orders (PCO) issued by the NSW Environment Protection Authority (EPA).

The objective of poisoning is to remove 90% or more of rabbits, which will prevent the population from quickly recovering, allowing time to implement follow up control. Carrots are the preferred feed material for rabbits, but oats and pellets may be used.

Rabbit poisoning with 1080 in NSW is regulated by the Pesticides Act 1999 and can be carried out only under the conditions set down in the Pesticide Control (1080 Bait Products) Order 2019 (1080 PCO).

Poisoning with 1080 is a cost effective method to reduce medium and high density rabbit numbers to a manageable level. To conduct a 1080 poisoning program, contact your Local Land Services. All 1080 users must have chemical risk management training at Australian Qualifications Framework level 3 (AQF3).

A minimum of three 'free' feeds (without toxin) are required prior to laying 1080 poison bait except where an Authorised Control Officer recommends otherwise. Using carrots, 3 free feeds at 2 to 3 day intervals are best.

Dogs are highly susceptible to 1080 poison and will readily eat carrots, pellet baits and carcasses of dead rabbits. Keep working dogs well fed and chained when not at work and muzzle them if working in or near a baited area. Do not dog, trap, shoot or otherwise disturb the rabbits in an area for several weeks before starting a baiting program.

Pindone is an anticoagulant poison that requires at least two 'free' feeds (without toxin) followed by a minimum of three Pindone feeds to kill a high proportion of rabbits. Pindone has an antidote (vitamin K1) and is safer to use in closer settled areas. To conduct a Pindone poisoning program, contact your Local Land Services. 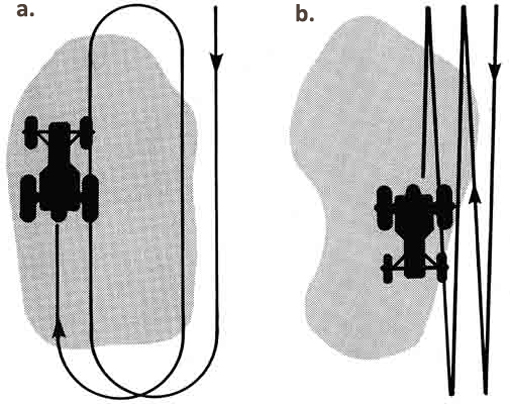 The warren provides shelter and protection for rabbits, to avoid extremes of weather and predators. Rabbits do not readily dig new warrens, so destruction of warrens greatly inhibits resurgence and re-colonisation of treated areas.

Warren ripping is highly target specific, and can be successfully employed during the breeding season (when poisoning programs are less effective).

The aim of warren ripping is to simultaneously destroy the structure of the warren and kill all of the rabbits. It is best to use dogs to force surface rabbits into warrens before the start of ripping. Note that warrens may extend under fences, buildings, rock ledges and the root system of large trees. These inaccessible burrows should be fumigated some hours before ripping. In some situations where mechanical rippers cannot be used, explosives may be used to destroy warrens. Explosives may only be purchased and used by licensed operators.

Rabbits may also live among surface shelter, such as dense vegetation and weeds. Other rabbit harbour includes blackberry, lantana, fallen logs, farm refuse, old machinery and rock piles. When removing vegetation, the onus is on the land manager to ensure that it is within clearing laws and does not threaten endangered species. 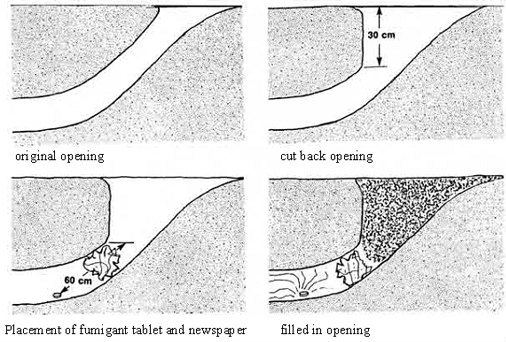 Fumigation can be very effective for controlling rabbits where other methods are unsuitable. Phosphine and the soon-to-be-released carbon monoxide pressure fumigator may be used as rabbit fumigants. Both chemicals are toxic to humans, particularly in enclosed spaces.

Fumigants are used to fill the warren with gas that is heavier than air. All burrow entrances must be closed to prevent the escape of rabbits.

When using fumigation it is important to check treated warrens soon afterwards for new openings of burrows, and re-treat these.

Phosphine is generated from Aluminium Phosphide tablets placed in the warren, when they contact moisture in the soil or from the atmosphere. The gas diffuses through the warren (Static Fumigation)

Myxomatosis virus was introduced to rabbits in Australia in 1950, initially giving a very high level of control of populations. The disease has steadily become less effective against rabbits due to both attenuation of the virus and increased genetic resistance in the rabbit. Outbreaks of myxomatosis occur frequently, however the effects vary considerably. Rabbits that recover from an attack of myxomatosis are generally immune for life. Rabbits usually become infected after being bitten by an insect vector, typically mosquitos, but also European and Spanish rabbit fleas that have been introduced to Australia. While myxomatosis depresses rabbit numbers, the percentage killed is usually too low to achieve a significant reduction in their impacts.

RHDV is caused by a calicivirus specific to rabbits. It first entered the wild population during testing on Wardang Island in South Australia in 1995. Domestic rabbits may be inoculated against the disease, but will require additional annual vaccinations to ensure protection from the disease. RHDV appears to be spread in rabbits by direct contact and through insect vectors. The disease initially achieved a high level of control among rabbit populations, particularly in more arid environments, however despite efforts to spread it the effects have been very patchy in some districts. The virus may be introduced to rabbits on carrot and oat feed, by treating several warrens then allowing the disease to spread. RHDV should not be introduced while myxomatosis is active in rabbits. Contact your Local Land Services if considering using RHDV, to assess the suitability and availability of the virus. More information.....

On smaller properties, regular shooting can help maintain rabbit numbers at low levels, so that their impacts are minimal. Shooting is an easy and effective way to remove rabbits when numbers are low. It will rarely be effective in controlling medium to high density rabbit populations. Shooting at night under a spotlight is the more efficient than daylight shooting. When used by a competent shooter, a .22 calibre rifle is most satisfactory, being accurate within the range of most spotlights, and using inexpensive ammunition.

Soft-jawed spring traps and mesh barrel traps may be used to remove rabbits. Trapping should only be used to control the last few rabbits, and should not be relied on to control medium to high density rabbit populations. Use of steel-jawed traps in NSW is an offense under the Prevention of Cruelty to Animals Act 1979.

Traps are normally set in the active openings in the warren, in the late evening. Once set, traps should be checked as soon as possible after dawn then deactivated, to minimise unnecessary suffering to captured animals and lessen the chance of capturing non-target animals during the day. Barrel traps are placed in the warren entrances and have a one way flap to capture animals that enter. All the entrances to a warren need to be treated at once, to make trapping effective.

Rabbit-proof netting fences are very expensive to construct, but provide a largely permanent exclusion of rabbits from areas of high value crops and plantings. Extra time and expense are required to bury netting and rabbit-proof stays and gateways. Even so, when stressed, rabbits will climb over or dig under the best netting fences, so regular checks and maintenance will be needed to maintain the effectiveness of any rabbit-proof fence. An electric offset wire may be used to enhance the effectiveness of a netting fence, with the benefit of keeping both native and domestic animals off the fence.

Rabbits occur in pockets in some towns and metropolitan areas, with unwanted impacts on house yards and gardens even though they are present only in small numbers. Domestic or pet rabbits escape or are released deliberately, and become established in the wild.

Restrictions on the use of 1080 poison mean that it is not a suitable control option for rabbits in closely settled areas. RHDV or Pindone are the preferred control options for larger areas. Use of cage traps or exclusion may be the only viable options for urban landholders. 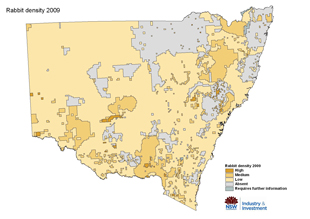