Wild dogs are a 'declared pest animal' under the Local Land Services Act 2013 and are defined as: 'any dog, including a dingo, that is, or has become wild, but excludes any dog kept in accordance with the Companion Animals Act 1998, the Exhibited Animals Protection Act 1986, or the Animal Research Act 1985 or any legislation made in replacement of any of those Acts'.

Wild dogs were first introduced to Australia approximately 3,500 to 4,000 years ago, probably by Asian seafarers who landed regularly on northern Australia.

Wild dogs are found across NSW, however, the eastern ranges, the coastal hinterland and tablelands have the highest populations. Increasingly, wild dogs are found close to towns where they intermingle with local dogs and can become mis-identified as 'strays'. The wild dog is highly adaptable and may live successfully in arid to rainforest environments, providing there is an adequate supply of food, water and shelter.

Wild dogs are predominately golden or yellow but can also be white, black, black and tan, brown, brindle, patchy and any combination of these.

Weights of adult wild dogs generally range from 11 to 25kg for males and 7 to 22kg for females.

Wild dogs live in a wide variety of habitats and prefer areas where human disturbance is limited and where shelter, food and water is abundant.

Wild dogs have a flexible social system. Each member of the group occupies a home range which overlaps with those of other wild dogs to various extents.

As could be expected, areas with the greatest food sources and key water points within home ranges are used most frequently and others parts may be rarely visited. Members of a social group meet and separate over time or rely on vocal communication. This explains why some wild dogs are mostly seen as individuals. Most preferred prey is hunted by individual dogs but when prey availability changes, wild dogs will form packs to hunt larger prey such as cattle and kangaroos. Sheep and goats can be hunted by individuals or small groups working together.

Movements often follow well defined paths along topographic features. The shape of the territory is often determined to a large extent by topography and distinguishing features such as mountain spurs or rivers forming boundaries. Wild dogs may move throughout the day and night but are mostly active at sunrise and sunset and least active during the middle of the day.

Surplus killing occurs when a predator attacks and either kills or injures a number of prey animals, such as kangaroos or sheep that are excess to the predator's nutritional requirements. This behaviour occurs with many predators including wild dogs and foxes. Resulting multiple domestic livestock losses can be devastating for livestock producers.

Cohesion within groups and separation between groups is maintained by a variety of communication methods. Scents in urine and faeces, marking via scratching or raking the ground, and vocalisations are all used. When individuals meet, facial expressions and body postures are used to communicate dominance or submission. Aggression between animals is not uncommon and is used to establish or maintain social position.

Wild dogs usually breed once a year. With the seasonal nature of food supply it is very rare for two litters to be successfully raised in one year. Some bitches may breed in their first year but not all do.

After a 63 day pregnancy, a litter typically of 4 to 6 pups, is born in a den, such as a hollow log, cave or thick vegetation. Dens may be used in successive years. Small pups are confined to the den, suckled and fed solid food and water brought to them by the adults. This solid food may be carried and regurgitated for the pups by both adults.

Once old enough the pups are taken from the den to kills and to other dens throughout the home range of the adults. Weaning occurs at 6 to 8 weeks but the pups remain with the adults until 6 to 12 months of age.

Wild dogs can act as a reservoir for parasites and diseases that affect livestock, wildlife and domestic pets, including sheep measles, hydatidosis, mange, distemper, hepatitis, parvovirus, Neospora caninum and toxoplasmosis.

Wild dogs may also act as a reservoir of infection for some exotic diseases such as rabies. This would make eradication of the disease difficult and may have far reaching economic and social implications.

Wild dogs harbour a number of parasites of significance to human health such as, roundworms, hookworms and hydatids.

The most important parasite of wild dogs in Australia is the hydatid tapeworm. This parasitic tapeworm is present in a high percentage of wild dogs and the intermediate stage, the hydatid cyst, is sometimes fatal to humans. Care should be taken to wear gloves and wash hands thoroughly with soap and water after handling wild dogs and domestic livestock with injuries.

Wild dogs may significantly affect domestic livestock industries such as sheep, cattle, goats and poultry, through predation and disease. The sheep industry is the most significantly impacted but attacks on calves and larger cattle are quite common.

Livestock enterprises located adjacent to wild dog habitat may suffer severe localised predation. The cost of predation is not confined to direct losses through livestock deaths. Injured livestock require treatment and the livestock owner spends time supervising and protecting their flock. Indirect impacts include, poor weight gain, reduced wool growth in sheep and mismothering and loss of lambs. Financially, capital outlay for control techniques such as trapping, shooting and baiting may be substantial.

Contrary to common belief, cattle are also susceptible to wild dog attack. Young calves or young cattle are most vulnerable and older cows, steers and bulls may be maimed and killed. In areas where hydatids are endemic in wild dogs, a large proportion of cattle offal may be condemned at abattoirs to minimise risk of transmission.

Predation may occur in all months of the year and patterns vary slightly among areas but commonly peaks in March to June on the tablelands and inland, and in October to November on the coast. It is only through accurate reporting of wild dog sightings and attacks that wild dog management plans can be developed.

Recognition and signs of predation

The first signs of wild dog predation are often livestock carcases, flightiness of livestock in response to disturbance, such as mustering with dogs, or injured and straggling livestock.

If adult sheep or calves are the prey then wild dogs would normally be implicated, whereas lambs may be killed by foxes, wild dogs or eagles. When carcases are fresh, inspect for signs of blood, saliva and bite marks and footprints around the animal. The presence of dog footprints at the carcasses does not necessarily mean predation was the cause of death. Pieces of wool with patches of skin attached and blood trails, are good indicators of wild dog attacks. If these are not apparent and there are no other obvious explanations for the death, skin the neck area and bruising and tooth marks will be obvious if dogs have attacked and killed the animal. One should never discount stray town or farm dogs as potential killers.

The age, body position and location of a sheep or calf carcass may give some idea whether wild dogs were involved. Wild dogs will attack sheep of all ages but it is less common for them to attack cattle older than 12 months. Attacks can occur anywhere, whereas livestock dying of natural causes generally die in a protected area.

Wild dogs often attack from behind as sheep or calves move away. If attacked animals survive, they may have substantial tissue damage around the hindquarters, be lame, be without tails or have skin hanging from them. Sometimes, ears and tails are chewed on older cattle. Surviving calves often show only teeth marks as evidence of dog attack and the area around the bite becomes swollen through infection and flystrike.

Predation and hybridisation by feral dogs is listed as a Key Threatening Process (KTP).

The impacts of wild dogs on native species varies between areas. Predation by wild dogs can have negative impacts on some threatened species. For example, wild dog predation can be a high source of mortality in koala populations and this combined with habitat fragmentation has the potential to cause local extinctions.

Management of wild dogs is challenging as some sections of the community view dingoes, wild dogs as a native species that needs to be conserved. In NSW, through the declaration of Schedule 2 lands, public land managers aim to control wild dogs in areas where they impact on agriculture or other values, while conserving dingo populations in identified areas. 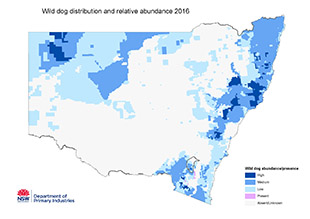 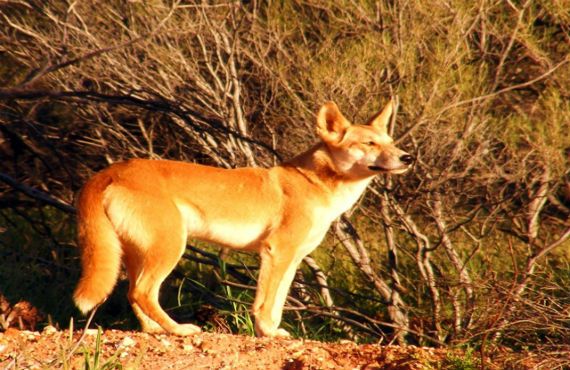 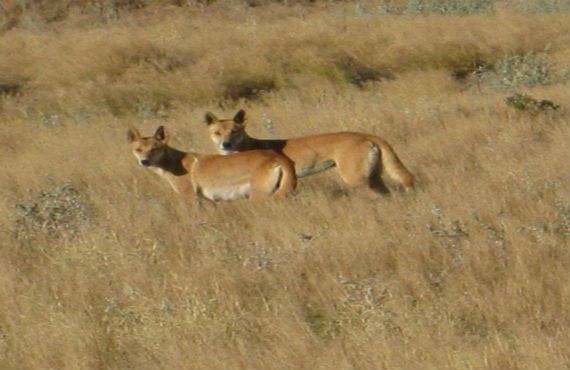 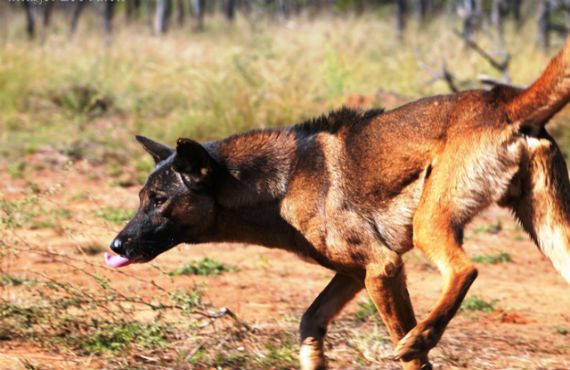 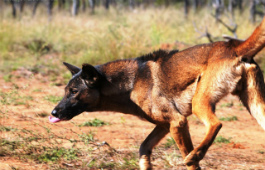