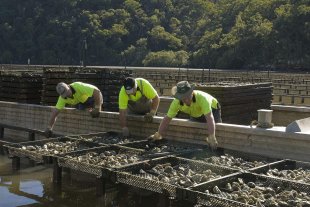 There is oyster aquaculture area currently designated in 5 NSW estuaries spread along the entire length of the NSW coast from the Tweed River on the Queensland border to Wonboyn Lake adjacent to the Victorian border.

For a history of the NSW oyster industry and current management initiatives see the NSW Oyster Industry Sustainable Aquaculture Strategy.

The Pacific Oyster is an introduced species and is declared as a Class 2 Noxious Fish in all NSW waters other than in the waters of Port Stephens, under the Fisheries Management Act, 1994 (Schedule 6C). Due to the overwhelming numbers of wild Pacific Oysters present at Port Stephens, permission was granted for aquaculture permit holders to cultivate Pacific Oysters in the estuary in 1990.

In addition, Management Plans have been initiated in two NSW estuaries deal with local infestations.

Following the impact of the Sydney Rock Oyster disease QX in the Georges and Hawkesbury rivers, triploid Pacific Oysters are now also cultured in those estuaries by approved aquaculture permit holders. The approval to allow culture of these functionally sterile oysters was granted following an environmental impact assessment and five year trial culture period. Following further application and environmental assessment, triploid Pacific Oysters are now approved for commercial cultivation in Clyde River and the Shoalhaven/Crookhaven estuaries.

The location of major oyster producing estuaries in NSW