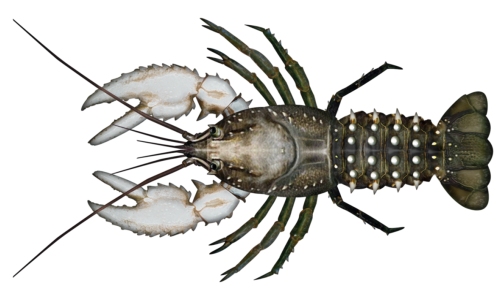 Murray Crayfish are slow-growing animals and may take up to nine years until they reach their legal length of 10 cm.  They are opportunistic feeders, feeding on decaying animals and plants. Like all other freshwater crayfish species, they undertake a series of moults as they grow.  Murray Crayfish become more active during the winter months.  Mating activity usually occurs during May, most likely cued to a decline in water temperatures.  Females carry eggs under their tails (attached to the mother's pleopods).  Eggs hatch during late spring, around 140 days after fertilisation.  Juveniles remain attached to the mothers pleopods until they have gone through a series of moults, after which time they become self sufficient.

Murray Crayfish have been reported to grow to 3 kg and are the second largest freshwater crayfish in the world behind the Tasmanian Freshwater Crayfish.

Murray Crayfish can be found in the Murray River upstream of Mildura, in the Murrumbidgee River and in some dams, and are the only species in the Euastacus genus that live in both cold and warm water habitats.