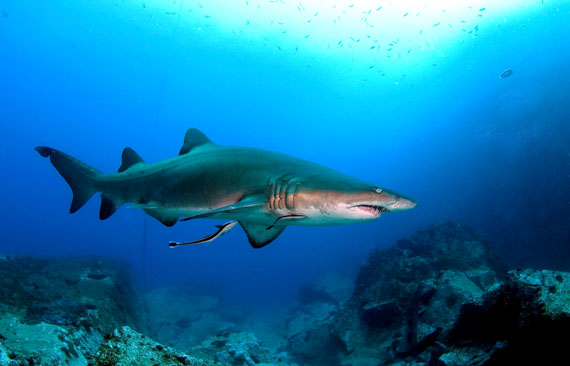 The Australian east coast population of Greynurse Sharks aggregate at, and migrate between a number of key sites along the coast of NSW and southern Queensland from Montague Island in the south to Fraser Island in the north.

Greynurse Sharks can grow to a maximum length of 3.2m.

Greynurse Sharks have large, stout bodies tapered at each end, a pointed snout and small eyes. The upper surface of Greynurse Sharks is bronze coloured, and the underside is pale white. Juveniles often have dark spots on the lower half of the body and the caudal (tail) fin. These spots fade as the shark becomes larger, but sometimes persist on adults. They have two distinctive large dorsal (top) fins of similar size. The first dorsal fin is set well back from the pectoral (side) fins. The anal fin is similar in size to both dorsal fins. The mouth extends beyond the front of the eye, and has long, protruding teeth.

Watch a video of a Greynurse Shark rescue from Lake Conjola, NSW (2:56 mins)