The Saanen is a Swiss breed which originated in the Saane Valley. It is now the most popular dairy goat breed in many countries, including Australia.

Saanens, the first of the improved dairy goat breeds to be brought into Australia, were first imported in 1913 by the New South Wales Department of Agriculture. Two bucks and ten does from France and Switzerland were brought in for the Department’s Nyngan Experimental Farm. A further two bucks were imported from Canada by the Department in 1929, also for the Nyngan farm which was eventually disbanded in 1933. However, Nyngan Saanens have had a profound influence on the breed in Australia.

After World War II, the Department brought in a further five bucks and six does for its stud which was at Condobolin and several private breeders also imported Saanens. Imports since the War have been of the British Saanen type.

Australian-bred Saanens are of world standard and have set many milk producing records. Saanens have been used in many parts of the world in grading-up local breeds.

Saanen does are heavy milk producers and usually yield between 3% and 4% fat.

The Saanen is a typical dairy-type animal, it has a dished or straight facial line and a wedge-shaped body. Saanens are of medium height when compared with the other Alpine breeds in Australia. Does weigh at least 64 kg. The average height measured at the withers, is about 81 cm for does and 94 cm for bucks.

The coat is all white or all cream and the hair is generally short and fairly fine although some may have longer hair along the spine, hindquarters, or both. Horns may or may not be present at birth. The ears are generally pointed and erect and the head is usually lightly structured.

The breed is sensitive to excessive sunlight and performs best in cooler conditions. The provision of shade is essential, and tan skin is preferable.

Saanens are usually very docile animals and like to keep to a routine so are well-suited to machine milking. They respond quickly to affection. 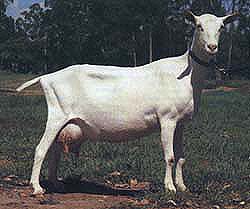 The high-producing Saanen doe should also be an efficient reproducer. She should have a docile nature, and appear alert and feminine.

The udder should be well developed not fleshy, and have a collapsed appearance and a soft texture after milking. It should be round or globular, and not pendulous or ‘split’ between the halves. A fairly flat udder sole is preferable. The udder should be carried high and well under the body. Good udder attachment is particularly important.

The jaw should be square (not overshot or undershot) and the teeth should be sound. The muzzle and nostrils should be wide, the lips broad and the eyes set well apart. The neck should be long, slim, of good depth and connect evenly with the withers and shoulders.

The body should be wedge-shaped, well developed and have good height and depth. The chest should be wide and deep. The ribs should be well sprung. There should be no marked dip behind the withers or shoulders. The back should be level from the shoulders to the hips and drop slightly to the tail.

The Saanen doe should stand and walk without dropping at the pasterns. The legs should be clean, long and straight and placed squarely under the body. They should not be cow-hocked. The thighs should be thin, allowing adequate room for the udder. 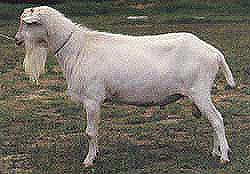 The Saanen buck’s ability should be gauged by his reproductive performance and the quality and performance of his offspring. The buck should have good conformation and depth of body, be masculine but not coarse in appearance and have vigour.

The testicles should be of good size, well balanced and firm. The scrotum should be well placed, not divided and allow the testes to hang away from the body (not excessively).

Polled bucks are not generally used in breeding programs as offspring resulting from matings with polled does may be born as either intersex females or sterile males. If polled bucks are used, they should only be mated with horned does.