Asian black-spined toads are a stocky, medium to large toad with a small head and short hind limbs. Adults look very similar to the Cane toad although they do not grow as large.

Their colour can range from greyish to reddish brown. The most common colour is a pale yellow-brown with dark or reddish-brown streaks and spots.

Their back is covered with round pimple-like warts, often surrounded by a darker pigment and capped with dark, distinctive spines.

Their head has elevated bony ridges, with long dark crests that border the eyelids and run down on either side of the eye.

They have black-tipped, hooked toes. 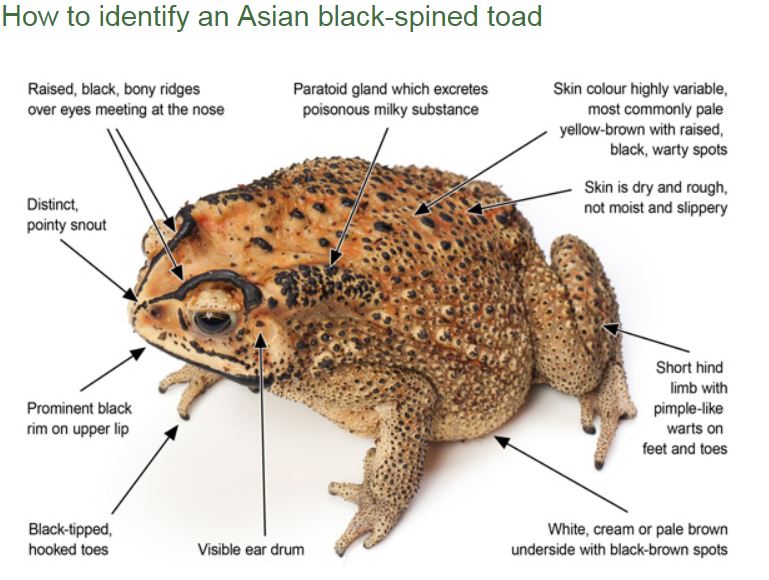 The Asian black-spined toad is not native to Australia and if given the opportunity could establish in the cooler parts of Australia, including NSW. If it became established it could compete with native frogs and toads for food and suitable habitat. As a species entering from overseas it also has the potential to carry exotic parasites and diseases.

The Asian black-spined toad has a poison gland much like the cane toad. The toad’s skin secretions contain several bioactive compounds with lethal, hypotensive, hypertensive, neurotoxic, cardiotoxic, haemolytic and sleep-inducing factors, potentially causing severe impacts for native species which may prey on the toad.

The milky toxin has a pungent odour and may cause itching in the nose and eyes when handled by humans. It does not pose a direct threat to human safety unless directly consumed. The consumption of Asian black-spined toad skin or eggs can cause serious illness or even death.

They are nocturnal so shelter during the day under rocks, leaf-litter, logs and man-made structures such as drains, rubbish piles and sometimes houses. At night they often gather beneath street lamps and other lights to catch insects.

They are ground-dwelling, poor climbers and are unable to jump very high due to the absence of large toe pads.

Their call sounds like a telephone dial tone (creo-o-o; cro-ro-ro-ro) and is sustained for about 30 seconds and repeated in a chorus monotonously. It is very different to most native frog calls. It will be heard at night and sometimes on overcast days.

In Australia, the importation of live animals is controlled by the Environment Protection and Biodiversity Conservation Act 1999 (EPBC Act). Under the EPBC Act, restrictions have been established as a safeguard to protect Australia against exotic pests and diseases that are considered a threat to the Australian environment, economy and the wider community and to protect endangered species from uncontrolled trade which can lead to population decline and extinction of endangered species.

As a reflection of the biosecurity risks it presents, the Asian black-spined toad is classified as a Prohibited Dealing under the NSW Biosecurity Act 2015. It is an offence to keep or otherwise deal with this species.