The main breeds for meat production are Muscovy, Aylesbury, Pekin and Rouen. Various crosses between these four pure breeds are also suitable for meat. Most ducks produced commercially for meat in Australia are Pekin/Aylesbury crosses—the cross is predominantly Pekin.

The Muscovy originated in Brazil and was domesticated in Europe around 1560. It is known in European countries by various names. Technically, the Muscovy is a member of the goose family, since it grazes and eats grass in the same way as geese. The Muscovy differs from other breeds in the following ways:

Fanciers often claim there are no purebred Aylesbury ducks left in Australia, and that what is commonly termed Aylesbury is in fact a Pekin. Both the Aylesbury and Pekin are called ‘English ducks’. They are marketed earlier than Muscovies as ‘green’ ducks. (‘Green’ refers to ducks before they develop adult feathers.) Although Aylesburys are not good layers, they do lay better than Muscovies, and do not go broody. Their eggs may be greenish white.

Although only used commercially for meat production, Pekins are better egg producers than the Muscovy and Aylesbury. This breed originated in China and is the most popular breed in the USA and the UK where much genetic improvement has taken place. Pekins or Pekin/Aylesbury crosses are also the most popular commercial meat ducks used in Australia. Like the Aylesbury, Pekins seldom go broody. They are a nervous breed and need to be handled carefully so that egg production and rate of weight gain are not affected.

Very good meat-producing ducklings can be bred by crossing Pekins with Aylesburys. The progeny have a high degree of hybrid vigour and are easily reared. 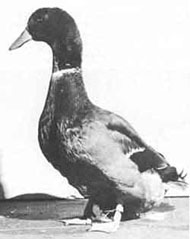 The Rouen, originally from France, is the least popular of all table breeds because it is the slowest to mature and has dark flesh. Its most outstanding feature is its magnificent colour and markings, a throwback to the Mallard duck from which it originated. The female differs in colour from the male.

Ducks are very hardy and can produce good egg numbers for three seasons. There are two main egg-producing breeds: Khaki Campbell and Indian Runner. There is very little difference between them, but the Khaki Campbell may have a slight advantage because it is a bit larger and so has a better carcase resale value.

Outstanding egg production has been achieved from individual birds that have laid 365 eggs in as many days. But ducks are difficult to manage in large numbers and do not produce eggs as economically as do hens. The albumen of duck eggs is slightly thicker than that of hen eggs, but most people cannot detect the difference between the two. This breed originated in the East Indies (Malaysia and China). The most popular and common varieties in Australia are the fawn, the white, and the fawn and white. The other two varieties are the black and the chocolate. Apart from its small frame, the breed is distinguished by an almost upright stance and the running gait from which its name is derived. 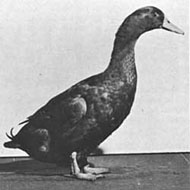 The Khaki Campbell was originally bred by a Mrs Campbell in England, by crossing a Rouen drake with a fawn and white Indian Runner duck to establish a dual-purpose breed. It is not a satisfactory producer of meat — the rather dark flesh has a typical ‘game’ flavour. However, it is quite hardy. It lays eggs with a pearly white shell and is preferred by most breeders for commercial egg production.

Table 1. shows the typical weights of adult birds for both the meat breeds and the egg breeds.

The main factor in selecting breeders is body weight. Since this is highly heritable, select birds individually when they reach marketing age. Also consider the following when selecting birds:

Since the heritability of all these factors is not high, a system of family selection is necessary. To do this, you need:

The trap nests are designed so that a duck can go into the nest but cannot get out until released by the operator. This allows the operator to record that an egg has been laid and to identify, by its wing or leg band, the bird that laid the egg.

A recording system would include such information as:

Select breeders that are young and vigorous. The following will help you differentiate between young and older ducks:

To achieve the greatest genetic progress, the time between generations (the ‘generation interval’) should be minimised. First-year ducks and drakes are the best — do not mate birds younger than 6 months of age.

The number of birds to be mated depends on the number of ducklings you want. With most breeds, one duck can produce about 100 marketable ducklings per season — selected strains will produce more.

To give both ducks and drakes time to settle down, they should be mated for 2 weeks before eggs are collected for setting. This will enable proper mating to occur and help ensure high fertility in the eggs laid. The smaller the number of birds mated and housed together, the better the results. For economic reasons commercial breeders have to practice mass matings.