Goslings tend to grow slowly and have to be kept to a slightly older age than other breeds before being ready for market. Because of their size they are not good foragers but do well in confinement. The flesh is coarser than that of the Emden, and the proportion of bone and offal is high. The progeny of a Toulouse goose crossed with an Emden gander grow rapidly and have good fleshing qualities. 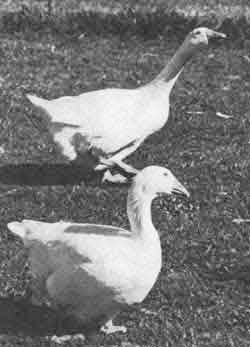 The Emden (sometimes spelt Embden) is a heavy breed that originates from Hanover in Germany. It is a prolific breeder and has a quiet disposition. Currently it is the most popular breed in New South Wales.

The breed is most suitable for crossing with other breeds. Emdens are reasonably good egg producers (up to 40 eggs per season); they are good sitters, early maturing and good foragers. Because feathers from Emdens are white, they are of greater value than feathers from other geese. Goslings can be sexed at day old with a reasonable degree of accuracy, as females have a darker down than males. After a few days, however, there is no difference in feather colour. 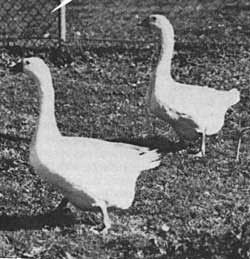 There are two colour varieties of this breed: the White Chinese and the Brown Chinese. Both originated in China and are smaller than the Toulouse or Emden. The Chinese is distinguishable from other geese by the knob or protuberance on its head.

Chinese geese go broody and are the better layers, laying as many as 50 eggs in a season. Because of this they are ideal for crossing with other breeds.

Chinese and Emden crosses produce desirable goslings of white fleshing qualities more economically than do the pure breeds. The Chinese is the most suitable ‘watchdog’ breed. 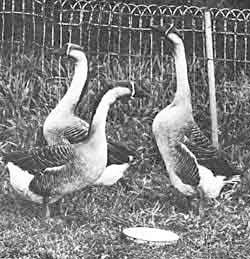 The Roman, a nondescript breed, originated in Europe from the Toulouse and Emden. It resembles the Emden, and is the oldest of all European breeds.

The African breed is a variety of the Chinese, slightly larger because of the infusion of Toulouse, giving the breed a dewlap. The breed possibly originated in India, and is not as good an egg producer as the Chinese.

To avoid poor fertility, breeders should not be overfat or oversized. Select only healthy, vigorous stock from birds at normal marketing age and body weight.

Records are immensely valuable when selecting for egg production; they show which geese should be culled from the flock. Table 2 is a guide to expected egg production from the common commercial breeds of geese:

The length of time breeders are kept depends on their performance. It may be necessary to replace birds after only four breeding seasons.

The number of geese to one gander varies; generally the more geese per gander the better, provided fertility and hatchability are not affected.

Geese prefer to mate on water. Whilst it is not essential to provide geese with swimming facilities, fertility in the heavy breeds is at its best if water deep enough to swim in is provided. Swimming water is only necessary in the breeding season. It improves the condition of geese generally and helps to keep them clean, which in turn helps to keep eggs clean.

Geese should be mated at least 1 month before the breeding season starts. Geese are selective in choosing their mates and, once successful matings have been established, will remain together for life. If the birds are allowed to select their mates, it is best to put more than the required number in a pen until the selections have been made. In the event of having to change mates, run the separated birds as far from each other as possible to prevent the birds fretting.

Geese are occasionally difficult to mate. Sometimes a gander will not mate with one or two of the females, which means fertility and hatchability will be lowered.

Where it is desired to force-mate geese, remove the gander from his females and add the new females to the ones he is already mating with, to enable all females to first accept each other. After a few days, reintroduce the gander to his mates.

Where flock matings are practised, ganders may fight, but no serious damage will occur provided they are evenly matched. Bullies and any birds continually subjected to bullying should be removed from the flock — so too should geese that wander around on their own, as their eggs will be infertile. There will be less fighting if ganders selected for breeding have been reared together.

One-year-old ganders will usually mate half the number of times with their mates than will 2-year-old birds. The fecundity (capability of producing abundant offspring) will generally increase with the age of the ganders until they are about 5 years old.

Because the heavy goose breeds will successfully mate with no more than three females, and geese are naturally only seasonal breeders, the cost of maintaining a flock can be expensive when breeders consume a large amount of feed.

Overseas, AI techniques are now being used successfully. Whilst AI requires additional work, it does mean that fewer ganders are needed in a flock, and semen and fertility can be easily evaluated.