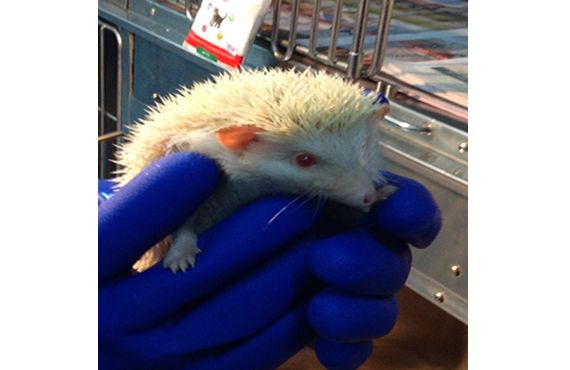 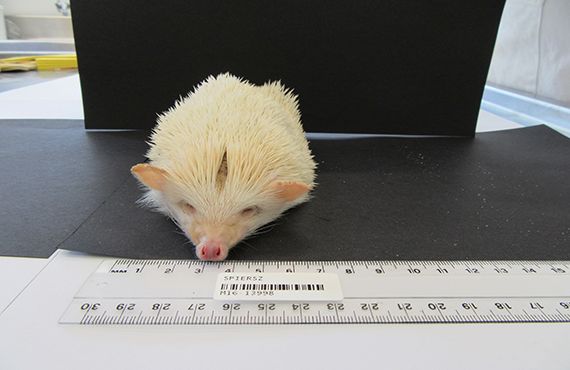 African hedgehog, Atelerix albiventris (this specimen is an albino and has a lack of skin pigmentation. Normally pigmented animals display a variety of colours including light brown, salt & pepper and grey) 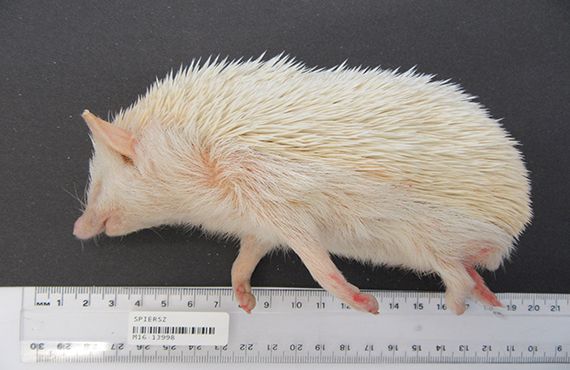 The African hedgehog (Atelerix albiventris) also known as the African pygmy hedgehog originates from Africa, with a range spreading through central, west and east Africa.

The African pygmy hedgehog is a small mammal with a pointed muzzle, short legs and its back and sides are covered in spines that are between 0.5 and 1.5 cm long. The African hedgehog weighs between 250 g and 600g and is on average about 21 cm long from head to tail. They usually have dark ears and muzzle and the body is speckled with grey, brown and white on the back and sides while the underparts are white. African hedgehogs can exhibit albinism, with the lack of pigmentation resulting in a totally white colouration and pink eyes. Albinism in the wild is rare but is often a trait selectively bred for in captive populations.

The African pygmy hedgehog is bred and sold as a pet in places like North America and the United Kingdom. However, the species is prohibited throughout Australia for a number of reasons including its potential to introduce exotic animal diseases and because the species has the ability to become a serious invasive pest in Australia.

The African hedgehog belongs to the Erinaceidae family which includes the European hedgehog (Erinaceus eruopaeus) which has established feral populations in New Zealand and some Scottish islands. Once established in a new environment, hedgehogs negatively impact native species due to their voracious, omnivorous appetite, affecting insects, snails, lizards and ground-nesting birds, particularly shore birds, as hedgehogs raid their nests and eat the eggs and chicks.

Hedgehogs also have the potential to seriously damage the Australian economy due to their ability to harbour exotic animal diseases such as foot and mouth disease. Other endemic diseases carried by hedgehogs include Salmonella, Q fever and Toxoplasmosis which are all capable of being transmitted to humans.

The African pygmy hedgehog gives birth to a litter of two to ten young, with an average of five per litter. The young are born in a nest and are blind and naked at birth. The female reaches sexual maturity at about one year of age and on average gives birth to one litter a year. A wild African hedgehog typically lives for 2-3 years while a captive hedgehog can live up to 10 years.

The importation of the African hedgehog into Australia is prohibited. In Australia the importation of live animals is controlled by the Environment Protection and Biodiversity Conservation Act 1999 (EPBC Act), and the Biosecurity Act 2015 (Cth). There are restrictions on the animals that can be imported into Australia. These restrictions have been established as a safeguard to protect Australia against exotic pests and diseases that are considered a threat to the Australian environment, economy and the wider community and to protect endangered species from uncontrolled trade which can lead to population decline and extinction of endangered species.

As a reflection of the biosecurity risks it presents, the African hedgehog is classified as a Prohibited Dealing under the Biosecurity Act 2015. It is an offence to keep this species unless authorised, for example under the Exhibited Animals Protection Act 1986 or Animal Research Act 1985.