Side view of head of larger American corn snake 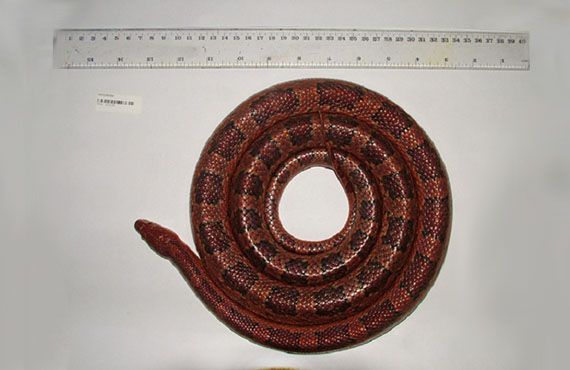 American corn snake displaying anerythristic colour morph (brought about through selective breeding). Anerythristic corn snakes do not have the red pigment so scale colours are combinations of black and grey with some developing yellow on the lower jaw-line/neck area. American corn snake displaying albino colour morph (brought about through selective breeding). This snake is a solid white colour with no sign of the typical belly checkers and/or yellow saddles 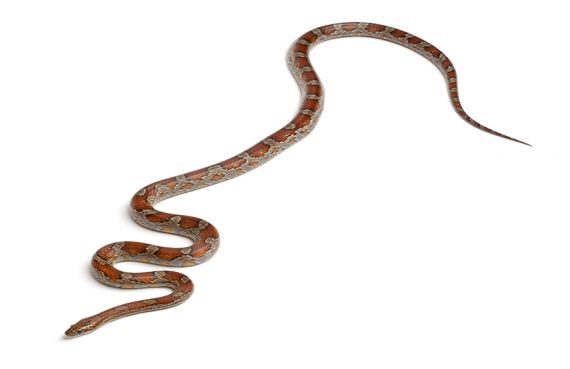 The American corn snake is a small to medium-sized, slender snake that can grow up to 180 cm long. Colouration in the corn snake species is highly variable however the most common form is orange or brownish-yellow with large black-edged red blotches down the middle of its back. The species also exhibits the pigmentary disorder, albinism which results in corn snakes with bright-red, orange, yellow and white colour combinations. The eyes of corn snakes with albinism tend to be red, orange or pink in colour. Although corn snakes with albinism are rare in the wild, they are common in captivity where they are often selectively bred in the pursuit of producing snakes with unusual colour variations.

The corn snake is recognised as a successful invasive species with non-native populations of corn snake having established in the Cayman Islands, the Virgin Islands and the Bahamas. Because the corn snake species is small and agile it is readily able to escape from keeper’s enclosures. Once liberated through escape or deliberate release, corn snakes are able to survive in a diverse range of habitats including open grassland, forest, agricultural land and semi-urban areas. These characteristics and the ability of the species to hide under objects and to climb trees make detection of the snake in an open environment difficult. Because the corn snake is difficult to detect, eradication once established in the wild is highly unlikely.

The corn snake is a generalist predator which feeds on a wide variety of prey including frogs, lizards, small mammals, ground dwelling and nesting birds. Although the corn snake is non-venomous it kills its prey through constriction. The corn snake is also a potential host for exotic pests and diseases that are a threat to native and domestic animals. For example it is known as a carrier of the parasite, Cryptosporidium which can infect humans, domestic and native animals with diarrhoeal disease. For the above reasons the corn snake is considered to have the potential to cause a significant decline in a variety of our native species.

Reproduction in corn snakes can occur within 2 years of their birth. The adult female corn snake typically lays from 10–12 eggs, but can be up to 24. After laying the eggs, the adult snake provides no further care and the eggs hatch in around 65 days. Because corn snakes can live for over 20 years in the wild, the species has the ability to rapidly increase its population density and distribution.

Corn snakes have been bred and actively distributed by the pet industry with the species now kept both legally and illegally in captivity around the world. In Australia the importation of live animals is controlled by the Environment Protection and Biodiversity Conservation Act 1999 (EPBC Act), and the Biosecurity Act 2015 (Cth). There are restrictions on the animals that can be imported into Australia. These restrictions have been established as a safeguard to protect Australia against exotic pests and diseases that are considered a threat to the Australian environment, economy and the wider community and to protect endangered species from uncontrolled trade which can lead to population decline and extinction of endangered species.

As a reflection of the biosecurity risks it presents, the American corn snake is classified as a Prohibited Dealing under the Biosecurity Act 2015. It is an offence to keep this species unless authorised, for example under the Exhibited Animals Protection Act 1986 or Animal Research Act 1985.