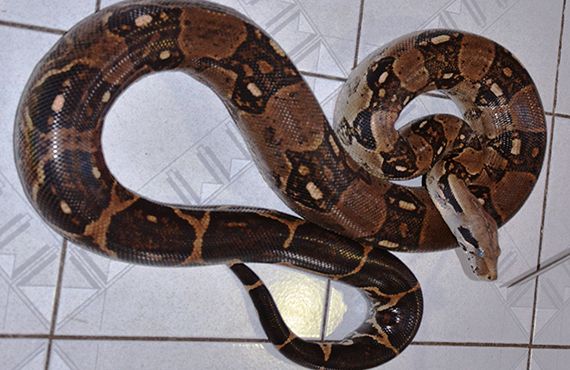 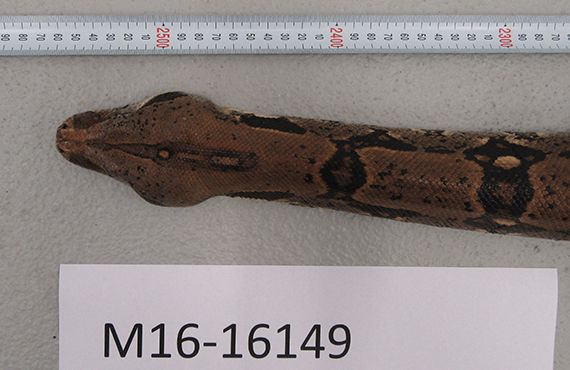 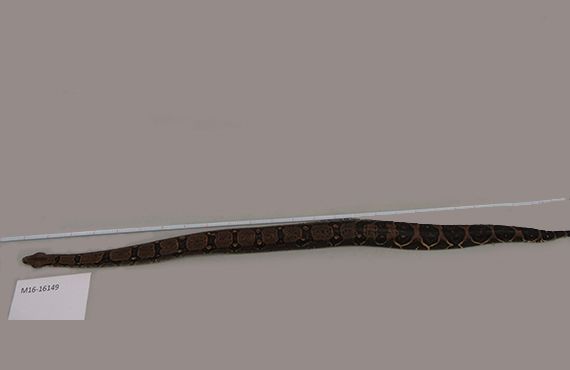 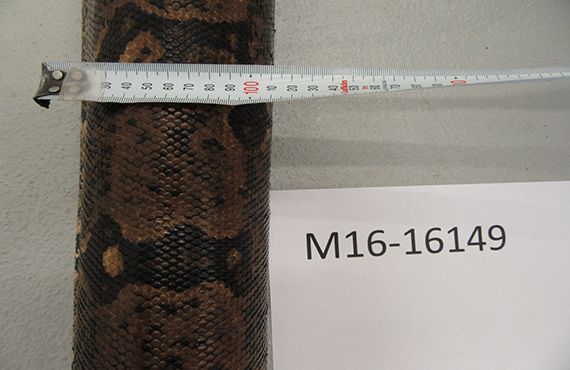 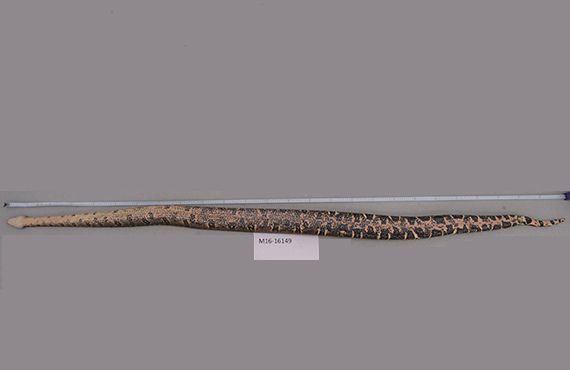 The Boa constrictor is considered to be one of the world’s largest snake species with an average length of around 3m. The Boa constrictor is non-venomous and has an arrow-shaped head. Colouration of the Boa constrictor species ranges widely with tan, green, red and yellow colouration combinations. The Boa constrictor generally displays distinctive patterns on the body, of jagged lines, ovals, diamonds and circles, with typical markings often described as “saddles”. The coloured patterns aid in camouflaging the snake under natural conditions, allowing the species to evade detection and assist it to hide from and ambush its prey.

Boa constrictors have a proven record of success as an invasive species having successfully established non-native pest populations in locations such as Dade County, Florida in the USA and Cozumel Island, Mexico. The Bomford Risk Assessment Model1 provides a model of the risk to Australia of non-indigenous animals based on data collected for introduced species in Britain and the United States of America using parameters including taxonomy, climate matching, geographic range, and success of establishment elsewhere. The Bomford Risk Assessment Model classifies the Boa constrictor as a ‘Serious’ establishment risk for Australia.

Boa constrictors have been bred and actively distributed by the pet industry with the species now kept both legally and illegally in captivity around the world.

The Boa constrictor’s jaws are lined with small, hooked teeth which are used for grabbing and holding prey while it is wrapped around and suffocated by the snake. Boa constrictors feed on a wide variety of vertebrates including small mammals, birds and their eggs, small lizards and occasionally amphibians with larger sized Boa constrictors able to feed on larger animals. The Boa constrictor can represent a threat to humans, particularly small children, as well as domestic pets. It may impact on agricultural activities and it is known to threaten species of amphibians, birds, lizards, snakes and bats.

Boa constrictors can carry viruses such as Inclusion Body Disease and Ophidian Paramyxovirus, which are fatal to native Australian snakes as they have no resistance to the diseases.

Boa constrictors are prolific breeders and give birth to numerous live young, with litter size averaging 25 and reaching up to 60. Boa constrictors reach sexual maturity around 3 to 4 years of age and can live up to 30 years.

In Australia the importation of live animals is controlled by the Environment Protection and Biodiversity Conservation Act 1999 (EPBC Act), and the Biosecurity Act 2015 (Cth). There are restrictions on the animals that can be imported into Australia. These restrictions have been established as a safeguard to protect Australia against exotic pests and diseases that are considered a threat to the Australian environment, economy and the wider community and to protect endangered species from uncontrolled trade which can lead to population decline and extinction of endangered species.

In order to be eligible for import into Australia, a species must be included on the Commonwealth Government’s live Import List, maintained by the Commonwealth Department of Environment. Only the Boa constrictor occidentalis subspecies is listed as suitable for import in recognition of its CITES Appendix 1 threatened species status, allowing it to be imported for conservation purposes by zoos as part of a species management program. No other subspecies of Boa constrictor is included on the Live Import List making their importation into Australia illegal.

As a reflection of the biosecurity risks it presents, the Boa constrictor is classified as a Prohibited Dealing under the Biosecurity Act 2015. It is an offence to keep this species unless authorised, for example under the Exhibited Animals Protection Act 1986 or Animal Research Act 1985.