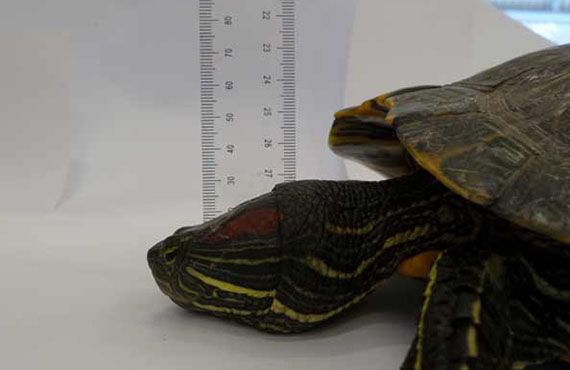 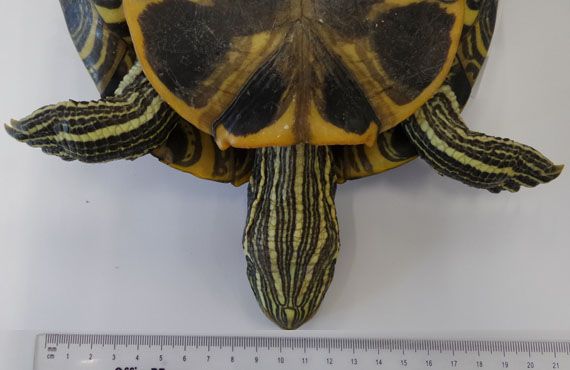 An adult red-eared slider turtle has a carapace length of 12.5 to 28 cm. It has a distinctive, broad red or orange stripe behind each eye, while narrow yellow stripes mark the rest of the animal’s head and legs. The carapace is dark green with yellow markings, and the plastron is yellow with some dark rings, blotches or swirls. Some individuals have a dark pigment that covers their coloured markings so that they appear nearly black in colour. Male red-eared slider turtles are usually smaller than females, and have very long claws on the front feet.

By Jemma Gillard for NSW DPI

The red-eared slider turtle is listed by the International Union for Conservation of Nature (IUCN) as ‘one of the world’s worst invasive alien species’. It is considered an environmental pest outside its natural range because the species competes with native turtles for food, nesting areas and basking sites.

Red-eared slider turtles are recognised reservoirs for the Salmonella bacterium. Infection of humans caused by the handling of turtles has led to restrictions on the sale of it in the USA.

The red-eared slider turtle has been exploited by the pet animal industry and since the 1970s, with massive numbers being produced on turtle farms in the USA for the international pet trade. Red-eared slider turtles became a popular pet animal because of its small size (as a juvenile), simple husbandry requirements and reasonably low price. They are often obtained as pets when they are very small and look attractive. However, the animals grow rapidly into large adults and are capable of biting their owners, resulting in them being dumped or released from captivity. Consequently, they now occur in freshwater ecosystems in many developed countries with high densities in urban wetlands.

Red-eared slider turtles have been smuggled into, illegally kept and illegally released in Australia. Consequently in some parts of Australia, wild living populations are now found in urban and semi-rural areas.

Red-eared slider turtle have an omnivorous diet. Adults tend to be more herbivorous than juveniles, but both will opportunistically eat aquatic invertebrates, fish, frog eggs and tadpoles, aquatic snakes, and a wide variety of aquatic plants and algae. They are highly adaptable and can tolerate anything from brackish waters, to man made canals, and city park ponds. Red-eared slider turtle may wander far from water and are able to survive cold winters by hibernating. Once available habitat is found the species can rapidly colonise a new area.

As a reflection of the biosecurity risks it presents, the red-eared slider turtle is classified as a Prohibited Dealing under the Biosecurity Act 2015. It is an offence to keep this species unless authorised, for example under the Exhibited Animals Protection Act 1986 or Animal Research Act 1985.

If you have seen or caught a red-eared slider turtle

Take a photo (if you can)

Let us know by completing the Report a biosecurity risk form

Control programs for red-eared slider turtles should only be undertaken by trained practitioners as part of an approved pest animal incursion program. Red-eared slider turtles are classed as prohibited dealings throughout NSW and, if found in the open environment should not be dealt with except as part of a response program organised by the NSW DPI or in accordance with the National Environmental Biosecurity Response Agreement. Further information on this issue can be obtained from the following link: Prohibited Dealing (Pest Animal Management) Exemption Order 2017 (PDF, 161.86 KB)

The most suitable survey options for detecting the presence of red-eared slider turtles include visual observations, intensive trapping using Cathedral traps, and motion sensor triggered cameras. Adjacent waterbodies should also be surveyed if they are a likely pathway or refuge for the turtles.

Recommended eradication and containment options include capture by hand or handheld nets and trapping using Cathedral traps, or if conditions allow, Basking traps and landing nets. Shooting may also be an option if the sliders are present in high volumes. 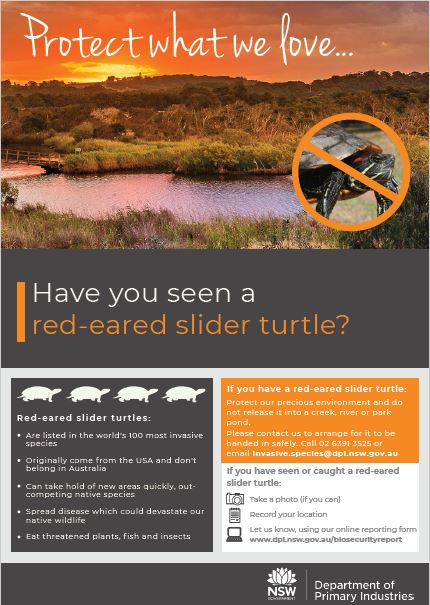 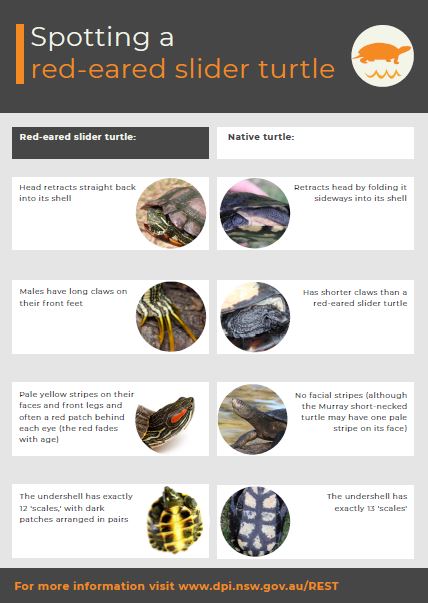