On Friday 6 September 2019, the licensing requirement for feral deer on private land changed under the Game and Feral Animal Control Act 2002.

Read more on the Managing feral deer in NSW page.

Feral deer can have a range of environmental impacts, including: browsing and grazing that affects plant seedling recruitment and growth; damage to vegetation through trampling and antler rubbing; impacts on water quality through wallowing and faecal contamination; and transporting weed seeds. Even at low densities, feral deer can impact on threatened native plant species. The environmental impacts of deer are listed as a Key Threatening Process under the Threatened Species Act 1995.

Feral deer have a range of economic impacts, including: competition with livestock for grazing resources and difficulty in ‘resting’ pasture in rotational systems; crop damage; damage to young trees in commercial forests through antler rubbing; and potential spread of disease.

Feral deer are difficult to exclude from agricultural areas and sensitive environmental areas as the cost of deer-proof fencing is very expensive.

Feral deer can also have significant human health and social impacts. Feral deer around urban areas (particularly along the east coast of NSW) expose the community to risk of vehicle accidents and also represent a public nuisance where they affect urban amenity, including damaging gardens.

Feral deer are declared game animals under the Game and Feral Animal Control Act 2002. This means deer hunting in NSW is controlled and regulated. There are a number of restrictions on how and when deer hunting can be carried out. Although landholders and immediate family are exempt, game licences are required by people conducting recreational, commercial and professional hunting of deer species, both on private and public land.

Information on the State-wide suspension of certain deer hunting regulations, such as legal hunting seasons and hunting at night, can be found on the Managing feral deer in NSW page.

For feral deer, this means that landowners (both private and public) will be required to control feral deer to the extent necessary to minimise the risk of any negative impacts on their lands or that of their neighbours. Priority areas to reduce the impacts of feral deer will be guided by a new regional pest animal management planning process that commenced in 2017. This process will be informed by a NSW Feral Deer Management Strategy being developed by the NSW Government and key stakeholders. 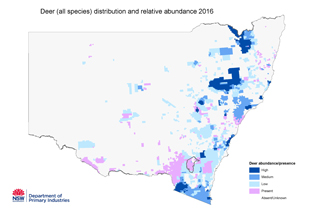 Report unusual animal sightings
Widespread pest animals should be reported to your Local Land Services. Sightings of unusual animals should be reported to DPI, alternatively phone 1800 680 244
Feral deer in New South Wales
A printable summary of the key points
NSW Codes of Practice and Standard Operating Procedures
The standard operating procedures help ensure that vertebrate pests are controlled in a safe, humane and cost effective way.