Initial control of a population with any method to which a high percentage of the population is susceptible is important. This is normally followed by secondary control methods designed to reduce the population and feral pig impacts further and prevent it building back up.

A decision may be made that a viable option is to change the type of enterprise in areas susceptible to the impact from pigs, for example, to change from lambs and lambing paddocks to wethers, from grazing to farming or from farming to grazing. This is normally a last resort but does occur in some instances.

Fencing is sometimes used to protect valuable enterprises in small areas. Effective pig-proof fences have been designed but need to be thoroughly maintained to sustain their effectiveness.

1080 poisoning: 1080 poisoning can be an effective initial control of pig numbers if undertaken in a methodical manner. It is particularly effective if green feed and other food sources are scarce. Feral pig baits can be prepared by mixing 1080 poison with grain or manufactured pellets. PigOut®, a manufactured bait product, is also available to control feral pigs. Grain, pellets, cucurbits, root vegetables, apples or quinces can be used as attractants in bait stations or traps.

Only Authorised Control Officers (ACOs) in NSW can prepare bait and supply it to land managers.1080 bait can only be used in bait stations. 1080 poison is regulated under a current 1080 Pesticide Control Order (PCO) that details the particulars of its use.

The use of 1080 currently requires a minimum chemical use accreditation at AQF3 level or training specified in the 1080 PCO.

Bait stations are constructed by enclosing an area, normally about 1000 m2, with fencing that will not allow livestock and non target species in, but can allow pigs to enter by pushing underneath. Bait material is placed in a furrowed area or on the ground within the fenced area.

Simple bait stations can be plain or barbed wire run around a group of trees, with the bait in a pit in the middle where pigs can push in but livestock and non target species are restricted.

Bait stations are used in areas where livestock cannot be removed and where it is preferable to have a permanent structure to be re-used when needed.

If pigs are readily using set trails and livestock have no access to an area, setting up bait stations along trails may be appropriate.

For bait stations it is essential that adequate "free-feeding" of unpoisoned bait material occurs prior to poisoning. Free feeding ensures that the maximum numbers of pigs are attracted to, and feeding on, the bait material and that excessive poisoned bait is not laid.

Once the amount being taken is consistent, adjust accordingly to ensure the minimum amount of bait material is left at the end of a night.

The period of free feeding may take up to 2 weeks or more and must be a minimum of 3 nights. Poisoned bait material of the correct volume can then be provided for a maximum of 3 consecutive nights. After this time all remaining poisoned bait must be removed and, where possible, carcasses of poisoned pigs should be collected and buried to prevent poisoning of non-target wildlife or domestic animals.

Other poisons: There are a number of toxic substances that are currently being used or investigated for the control of feral pigs.

Warfarin is an anticoagulant poison that is permitted in some States for use with grain bait. It is a slow acting poison and can cause severe joint pain and is considered inhumane by some groups.

Hog-gone® is a new feral pig product currently being researched and developed. It uses sodium nitrate which causes a rapid and apparently humane death of feral pigs in 2.3 hours.

Aerial baiting programs may be an effective means for dealing with a feral pig problem where ground control is impractical or where impacts are significant or potentially significant.

There are a number of restrictions and legal requirements associated with aerial baiting programs. A land manager should discuss the intended program with the ACO of Local Land Services several months in advance.

A person who undertakes aerial baiting must only use Pigout® Feral Pig Bait and it can only be applied by helicopter.

Free feeding is compulsory and must be undertaken for at least 3 nights before undertaking any aerial baiting using Pigout® Feral Pig Bait, unless an ACO specifically recommends otherwise.

Aerial 1080 baiting of feral pigs will not be permitted without specific prior approval from NSW DPI. Application for approval must be made by Local Land Services. Approval will be based on:

To receive approval, Local Land Services must demonstrate that there is no practical alternative to aerial baiting. Applications must be submitted from the Authority to the relevant NSW DPI officer at least 2 months before the proposed date of baiting.

Shooting feral pigs from helicopters is an effective method for an initial knockdown of numbers. This type of shooting is species-specific and can be used in areas that are inaccessible from the ground. Helicopter shooting can be expensive if not properly planned, so it is important to have coordination and cooperation from a number of groups or organisations.

Usually a helicopter carries one shooter and a spotter who looks for and keeps track of the pigs, including the number successfully shot. Wherever possible use a pilot who is experienced in pig-shooting: a good pilot readily provides the best position from which the shooter can make a successful shot.

Shooting feral pigs from the ground is a method normally used opportunistically to follow up and maintain numbers after an initial knockdown program has occurred. Often ground shooting is conducted using dogs to locate feral pigs. This can be effective as long as both the dogs and the pigs are treated in a humane fashion. Ground shooting should not be conducted prior to, or during, any other program of control, as it disrupts normal feral pig activity and may cause feral pigs to temporarily disperse to other areas.

Trapping of feral pigs is an effective technique to use as a follow-up after an initial knockdown of a population and as a maintenance technique to prevent numbers from quickly building back up. Trapping is flexible, as most traps can be easily moved to where pig activity is current. The exact numbers of pigs controlled is known and there is no danger to livestock or other domestic animals; where available, carcasses can be sold to a chiller. As traps are checked daily they pose little risk to wildlife.

Feral pig traps can be as simple as silo mesh formed into a heart shape and secured with steel posts. These traps are relatively portable and easy to set. The more substantial traps are constructed mesh panels secured with steel posts. These traps can have either a swing gate or a more solid top-hinged drop gate. A number of trap designs are effective. The construction of the entrance door to the trap is the most important part of the design. The door must work effectively to allow pigs to enter the trap but not allow them to back out. Trap selection is reliant on permanency and ease of access or portability. Each design has proven to be very effective.

Traps should be set up where feral pig activity is current. It is normal to set up traps near waterholes, on regular trails, or at other sites where pigs are moving regularly, such as through a hole in a fence.

Begin by providing bait material at the site. Bait types can include grain, or fermented grain, pellets, vegetables and fruit that they are already feeding on. Once pigs are readily consuming the bait, construct a trap around the bait site with a trail of bait leading to the trap entrance. Leave the trap door tied open for a number of nights until pigs are readily entering the trap to feed. The trap can then be set. Check the trap regularly, every day and humanely destroy any pigs caught. Pigs should not be left for excessive periods in traps. 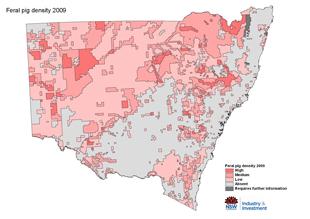