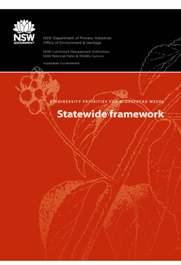 Weeds pose the second greatest threat to biodiversity after land clearing and habitat loss in New South Wales. Many weeds that threaten biodiversity are widespread and usually beyond the scope of prevention and eradication programs developed to deal with new and emerging weed threats.

The lists of priority sites and range of implementation options provided will help guide investment according to the priorities outlined in this strategy, CMA Catchment Action Plans and broader NSW initiatives, for example, it will help address Goal 3 of the NSW Invasive Species Plan, which is to reduce the impacts of widespread invasive species.

The priorities developed are not solely for investment by each CMA, but all stakeholders within each CMA boundary/region. While the outputs are provided at a regional level they may also inform decisions at smaller (local) scales, for example at Local Government (Council) level, for Landcare / Coastcare / Bushcare / Dunecare groups, for Indigenous Peoples, as well as for community conservation and volunteer groups.

The collation and prioritisation of sites is an ongoing, dynamic process and is still continuing in all CMA regions (now Local Land Services).

This project has 14 separate publications, a Statewide framework and a specific publication for each CMA.

This first overarching document outlines the Statewide framework used to develop the regional priorities for management of widespread weeds for biodiversity conservation in each of the former 13 CMA regions. This statewide framework document provides: (i) background information, (ii) the objectives of the project, (iii) the standardised methodology used to establish regional priorities, and (iv) guidance on implementing the priorities.

The remaining 13 parts (one for each CMA region), document the specific assessment outcomes for each individual region using the approach outlined in the Statewide framework. They provide guidance to aid decision-making and future investment in weed control for biodiversity conservation until 2015.